Arens: Netanyahu Made A "Mistake" With Livni 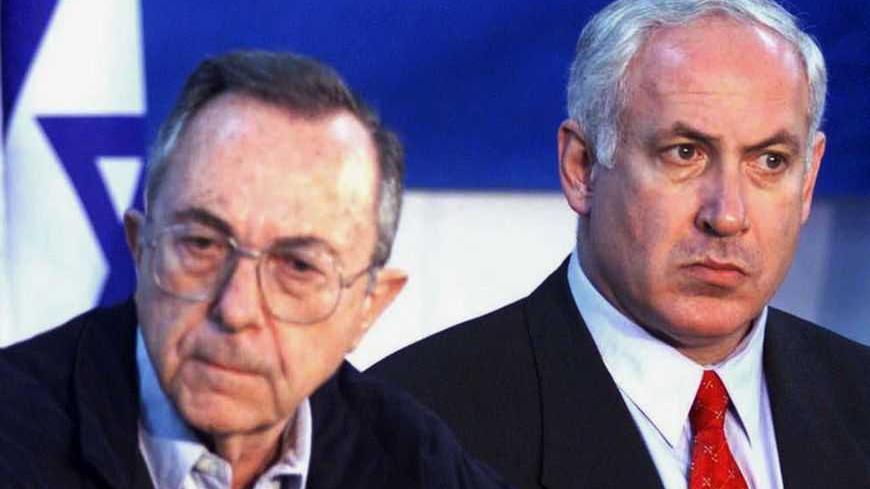 Former Defense Minister Moshe Arens is not at all perturbed over the forecasts of a third intifada knocking on our door, and rejects commentary that views the recent riots in the territories as the result of the diplomatic stagnation of the last four years.

Arens was viewed in the past as Prime Minister Benjamin Netanyahu’s patron in the Likud movement. Arens was the one to recommend Netanyahu’s appointment as Deputy Chief of Mission in Washington (1982), and subsequently recruited him into the party’s ranks. Today, Arens believes that Netanyahu could not have advanced a significant diplomatic process with the Palestinians in the last four years, for the simple reason that he had no one with whom to negotiate. According to Arens, Palestinian Authority Chairman Abu Mazen does not rule over his nation and therefore is not a [negotiating] partner.

The 88-year-old Arens is still a member of the Likud. He keeps close track of local, regional and international political developments and, of course, of Netanyahu’s complications in assembling his third government. Despite that many years have passed since Arens sat among the country’s decision-makers, his stance regarding regional conflicts has not softened. He had opposed the peace agreement with Egypt, had thought that Ariel Sharon’s disengagement was a terrible mistake, and called halting the Cast Lead operation by then-Prime Minister Ehud Olmert a “folly.”

In an interview with Al-Monitor, the Likud’s “tribal elder” assigns a very high score to Netanyahu for his international contribution to efforts halting Iranian nuclearization; but a low score on the internal politics sphere. Arens severely criticizes the prime minister for uniting Likud with former Foreign Minister Avigdor Liberman’s Yisrael Beiteinu; this, according to Arens, harmed the Likud movement. Arens also feels that Netanyahu errs again by co-opting HaTenua leader Tzipi Livni to his government as minister in charge of the diplomatic process, due to what he feels are her excessively lenient positions.

Moshe Arens, are we on the cusp of a Third Intifada?

“Even if that is the situation, we will know how to cope. I am not worried. We have pulled through worse things in the past and we will pull through this, too. Because if the alternative is missiles on Tel Aviv and other cities, I prefer this.

“We went through a very tough time ten years ago, of suicide terrorists in coffee houses and buses; there were days when dozens of civilians were killed, and we withstood it as a society. So anyone who doubts our endurance as a society — is making a mistake.''

What about the claim, that is starting to emerge as the truth, that diplomatic stagnation on the Palestinian front will bring a renewal of violence?

“I think that is a mistake. There was no chance for a diplomatic process over these years. The Palestinians are split between Hamas and Abu Mazen, so Abu Mazen cannot even meet the minimum stipulation for any agreement that would involve conceding territories in Judea and Samaria. You can sign an agreement with Abu Mazen, but the problem is that he cannot commit on his part that there will be no terror. So long as the Palestinians are not organized and have not reached the situation in which there is one authority that can speak for everyone, there is no point in negotiations. Abu Mazen cannot bring an end to the conflict, he will sign something and then come with more demands. That shouldn’t surprise us because when we observe the Arab world in general, we don’t see stable entities, except for Jordan, that can commit themselves to something.”

If not a diplomatic process, then what?

“Certainly not a one-sided disengagement — that we did already in Gaza and we are still paying a steep price for that. Now there is lots of talk about an interim agreement. This is a very nice title, which actually shows that everyone understands that there is no one with which to come to an agreement. I think that meanwhile, we need to find ways to improve the living conditions there, until there will be an address.”

So President Barack Obama’s visit does not herald the beginning of something new?

“Not in the Palestinian context. I tend to think that Obama also sees things today with a different eye in comparison to four years ago. The equation, according to which a diplomatic arrangement can be reached if construction is halted in the settlements, emerged as incorrect in the period in which construction was frozen in the settlements. I trust that the Americans also understand that that is not the way.”

From Aren’s point of view, the more important context of Obama’s visit is the Iranian threat. Moshe Arens was defense minister in the late Yitzhak Shamir’s government during the Gulf War [1991]. After the war, Arens reflected that Israel should have responded to missile fire from Iraq with a ground-based military operation.

“The struggle against the Iranian nuclear project is the most important, joint objective that we have now; it is a goal that strengthens and re-organizes the very close relations [between Israel and the United States]. We, and also the Americans, are of the opinion that the Iranians must be prevented from arming themselves with nuclear weapons, and that the military option is on the table,” he says.

Arens feel that “despite what others claim, Netanyahu is conducting the struggle against the Iranian threat properly, and I have no doubts at all on the matter. If we recall the situation that prevailed six or seven years ago, when Israel was, in effect, the only country that sounded the warning about what is taking place in Iran, we understand what happened here. Until then, the Iranian nuclear program was viewed ostensibly as Israel’s problem. Today, it is clear to everyone that it is a global problem, and Netanyahu had a large, important part in changing the [public] consciousness.”

You do not give Netanyahu high grades for his political performance.

“I have been a Likud member for many many years, and I did not like the alliance with Liberman. I felt it a mistake for a democratic party like the Likud to merge with a party ruled by one individual, and I did not think it was appropriate. It was clear to me that we would lose many votes, and that is what happened.”

Incidentally, on this point Arens’ opinion conforms to that of another former 'Likud prince', Dan Meridor, who said similar things in an interview with Al-Monitor last week.

Arens continues to criticize his former protégée and says, “Now we have to wait and see what kind of coalition Netanyahu will form, but unfortunately here, too, he is not conducting things properly. He only gets more entangled. The business of forming a government should have been much easier — the HaBayit HaYehudi is the Likud’s natural partner, and he should have cut a deal with them first. If he could have brought Yesh Atid leader Yair Lapid afterwards, I would have said, “Why not?”

But he first made a deal with Livni.

“It was a mistake to bring Tzipi Livni into a Likud government because her positions are very extreme regarding negotiations with, and concessions to, the Palestinians. She is not our natural partner.”