Mazal Mualem writes that if Prime Minister Benjamin Netanyahu can rid himself of his fears, he may discover that the government lineup being forced upon him might be best for Israel — and perhaps even best for himself. 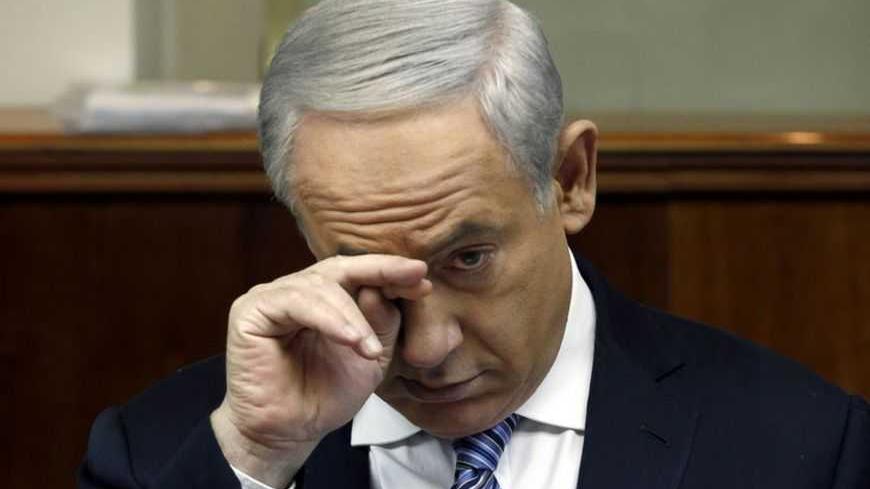 Prime Minister Benjamin Netanyahu is so wedded to his alliance with the ultra-Orthodox, his “natural partners,” that he cannot overcome his old habits and fears and notice that the opportunity of a lifetime awaits under his very nose: to head a government that would be the best for most of the Israeli public. A government with the Likud-Beiteinu, Yair Lapid’s Yesh Atid party, Naftali Bennett’s HaBayit HaYehudi party, along with HaTenua leader Tzipi Livni and Kadima Chairman Shaul Mofaz, has an excellent chance of ruling effectively and leading civil and economic reforms, thereby reflecting the will of the Israeli public as manifested at the polls.

The recent elections demonstrate that Israelis did, indeed, grant Netanyahu a mandate to keep leading them, but at the same time forced upon him the makeup of his government and its agenda.

Even though Netanyahu does not want it, such a government might even propel him to personal and national achievements. He need not run scared of the Lapid-Bennett alliance. He is better off viewing it as a means to promote a series of civil and economic reforms, which could determine the shape of the Israeli society in the coming decades and contribute to its fortitude no less so than blocking the Iranian nuclear program.

The “kegs of dynamite” upon which Israeli society rests, in the shape of the law of “shared burden” [requiring the military draft of the ultra-Orthodox] and the ongoing crises over conversion to Judaism and housing prices, must find themselves at the heart of the third Netanyahu government’s agenda.

If the Likud’s assessment that Netanyahu is planning a fourth term, as well, is correct, he is better off internalizing what the public told him in the last elections: You will be our prime minister, but we will determine for you the composition of the government you will head. We don’t trust you any more to know what’s good for us, after you didn’t understand why we took to the streets to demonstrate in the summer of 2011. The voters told Netanyahu in these elections: We are giving power to Lapid and Bennett because we want them in your government so that they can remind you every moment what’s really important to us.

There’s a reason that the electoral energy of the social protest manifested itself during the election campaign in the issue of the “shared burden” rather than in the regional threats of which Netanyahu often warned. There was something right and precise in such a fundamental demand to stop the phenomenon of ultra-Orthodox draft-dodging because it expressed the yearning of most of the Israeli public for equality, for a healthy and productive society, for economic growth, for social justice and an amendment of growing distortions, much more than the prices of cottage cheese and the housing crisis. There was a reason that Lapid, who portrayed the Israeli desire for sanity, raked in almost 20 Knesset seats.

Factually, the ultra-Orthodox parties are the ones that undermined the “shared burden” law last summer, under Netanyahu’s auspices, and therefore they cannot provide the solution — they are the problem.

Now that Netanyahu can no longer avoid passing the law — the Supreme Court obliged him to do so immediately after the elections, thus legally anchoring the exemption of the ultra-Orthodox from military service and their compulsory draft — he will be able to comply easily with the government lineup that he is trying to avoid. A government composed of the Likud-Beiteinu, Lapid, Bennett, Livni and Mofaz will be able to reach an agreement within several weeks about an historic military draft plan for the ultra-Orthodox. This could also be Netanyahu’s finest hour and serve as a respectable opening of his third term as prime minister.

But the issue of “shared burden” is not the only one on Netanyahu’s doorstep. There is also the solution to the conversion crisis, which has been repeatedly blocked by the opposition of the ultra-Orthodox. More than 300,000 of Israel’s citizens, most of them immigrants from Russia, are of questionable Jewish origin due to the obstacles placed before them by the rabbinical courts. And it was Yisrael Beiteinu leader Avigdor Liberman, who raised this flag in the last elections and tried to bring about an easing of conversion restrictions during the term of the outgoing government. And so he should be the catalyst for the formation of a government with Lapid and Bennett, which could arrive at an agreed-upon conversion plan within several weeks. Liberman would be able to take credit for this achievement with his public, for putting an end to the abuse by the rabbinical establishment of hundreds of thousands of citizens whose Judaism is not recognized.

The conversion reform could provide a successful launch for a series of reforms that would make the rabbinical establishment more accessible and friendly to the general public, and mostly to secular Israelis. In other words, it could rid the ministry of religion of its ultra-Orthodox wheeler-dealers.

Such a coalition could easily put a stop to the endless saga of daylight saving time and apply it on all the days of the year. This is the most correct course, both for economic reasons and for the personal safety of each and every one of us (studies show that daylight saving time reduces the number of traffic accidents).

A government with such a line-up will also manage to pass the coming budget, including its many cuts, since most of its components, and especially Lapid and Bennett, hold more or less similar world views to which Netanyahu can relate. In addition, Bennett and Lapid are not beholden to labor unions or to various tycoons, and they could help promote major economic reforms, including the law decentralizing financial holdings (which would ban large companies with real assets, such as construction firms, from owning large financial organizations, such as banks. Many believe, among them Bennett, that this will spur competitiveness).

Netanyahu will also be able to start revving up the diplomatic process. HaBayit HaYehudi, headed by Bennett, does not intend to prevent him from renewing the process, nor to embarrass him during the visit of US President Barack Obama. Bennett, Lapid and Netanyahu share the view that diplomatic negotiations should begin with no pre-conditions. In private conversations Bennett says that he has no intention of torpedoing a diplomatic process and that he plans to promote the law mandating a national referendum to determine whether “chunks of the homeland” will be given back [to the Palestinians].

And very last, but not least, the Iranian threat: Netanyahu spoke in recent days of the need for a broad-based government to stop Tehran’s nuclear program. He did so in a desperate attempt to create a misrepresentation according to which Bennett and Lapid are undermining a broad-based government essential to Israel’s existence — just because they refuse to sit with the ultra-Orthodox party Shas in the same government.

This spin did not take because there is no logic or truth to it. Netanyahu can keep advancing his plan to block the Iranians, just as well, with a government devoid of ultra-Orthodox factions. Lapid and Bennett as members of the diplomatic-defense cabinet will not prevent him from conducting a responsible defense policy.

For all these reasons, Netanyahu would do well to form his next government with a positive and productive outlook and to run it in this manner, too, without allowing considerations of political survival to rule him. Then he might also discover that the “new stars alliance” in politics is meant to truly bring about change and is not busy all day trying to bring him down.