Mazal Mualem sketches a guide to the new Israeli coalition for US Pesident Barack Obama. 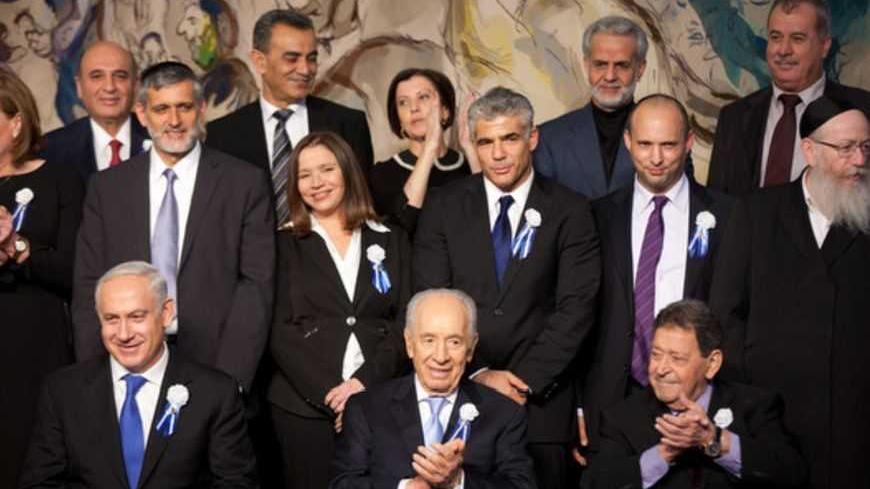 Israeli Prime Minister Benjamin Netanyahu and Israeli president Shimon Peres pose for a photograph with the heads of the parties of the Knesset (Israeli parliament) during a reception marking the opening of the 19th Knesset on Feb. 5, 2013 in Jerusalem, Israel. - Uriel Sinai/Getty Images

The new Israeli government that US President Barack Obama will meet this week on March 20 is the result of deep political changes brought about by the recent Israeli elections. The facts that no governmental changeover took place and that Benjamin Netanyahu is still prime minister are deceiving; nothing in the Israeli political map remains as it was. New powers have risen, shifting the center of gravity within the government. Below are five characteristics of the new map of Israeli politics, five things that the American president should know about before his arrival.

It would be advisable for the American president to become familiar with the “new stars” and the agendas that they promote. Netanyahu is flanked on one side by Naftali Bennett, chairman of the HaBayit HaYehudi party that is backed by the right-wing public and considered the party of the settlers. On Netanyahu’s other side stands Yair Lapid, who, about a year ago, founded Yesh Atid, the party of the middle class that took the Israeli center by storm, both in the affluent cities and in the periphery. Netanyahu's old allies, the ultra-Orthodox parties that were his security net in the last four years, are nowhere to be seen. While Netanyahu suspects that Bennett and Lapid are conspiring to dismantle his government, he is forced to live with them.

The surprising alliance between Bennett and Lapid that earned the “New Politics” moniker shaped Netanyahu’s third government that is being sworn in today, March 18. But mainly, this alliance created opportunities for socio-economic and civil change. It has also forced the Israeli-Palestinian conflict off the agenda.

Lapid and Bennett won over hearts and minds in the recent elections because they understood that the Israeli public — which hit the streets in protest in the summer of 2011 — are tired of hearing about security threats and Palestinians. They understood that the public’s concern is over their economic future and the education of their children, and they minimized the diplomatic issue as much as they could. Now that they hold key positions in the Israeli economy — Lapid as finance minister and Bennett as commerce and industry minister — expectations of them are very high. Obama should be prepared for Israeli eyes being fixed on the housing crisis, not on the stagnation in Israeli-Palestinian negotiations.

Lapid and Bennett will soon find themselves sitting in the diplomatic-defense cabinet instead of familiar figures such as former defense minister Ehud Barak, former deputy prime minister Dan Meridor and former minister Benny Begin. Despite their lack of experience, Lapid and Bennett will take part in making fateful decisions on war and peace, because that is what the public determined.

Former president Bill Clinton had suggested to Obama: “When Netanyahu is in power, you have no choice but to mobilize the Israeli public to your side. “ Obama did not follow this recommendation, and now he has a second chance. The president’s men are justifiably investing much effort into creating a direct relationship between Obama and the Israelis because the chemistry between them will have a major effect on the attitude of the Israeli political system toward the American president. The Israeli public never settled its accounts with Netanyahu over the prime minister’s troubled relationship with Obama, because it felt no empathy for the president and did not believe that his heart was in the right place.

Many Israelis see Obama as a president who is not as committed to them as were his predecessors, with no emotional connection to them. Those who perceived Clinton as a friend find it hard to connect to the cerebral, distant and detached president who is also at odds with their prime minister. Therefore, this visit contains a tremendous challenge. If Obama succeeds in eradicating the barriers and activating Israeli emotions, he will succeed in rehabilitating his position among the Israeli political elites as well, from Netanyahu to Bennett and Lapid. Everyone reads the surveys; everyone is affected by public opinion.

The Likud-Beiteinu faction, held jointly by the Likud and Yisrael Beiteinu of former foreign minister Avigdor Liberman, is an out-and-out right-wing faction with significant settler representation. It is likely to make life difficult for the prime minister if he takes an operative course of diplomatic negotiations.

In the primaries that determined the Likud list for the Knesset, the top places on the list were filled by candidates considered settler lobbyists. These included Danny Danon (candidate for deputy defense minister), Tzipi Hotovely, Yariv Levin (candidate for coalition chairman) and Zeev Elkin (candidate for deputy foreign minister). Together with the members of the Yisrael Beiteinu faction that allied itself with the Likud, Netanyahu may find himself locked into a coalition that will give him a hard time the more that negotiations with the Palestinians advance. This is what happened to former prime minister Ariel Sharon during the disengagement from Gaza. Netanyahu is acting wisely by pacifying the “problematic” people by giving them senior positions, people such as Knesset Members Danon and Elkin. Though this might soften the opposition, the potential for diplomatic insurrection still exists.

The Israeli public did not turn to the right.

Contrary to earlier assessments, the election results prove that the Israeli public did not move further right.

Ever since the disengagement from the Gaza Strip, the “bloc theory” has gained ground in Israel. According to the theory, the Israeli public votes for blocs — right or left — and not necessarily for specific parties. Netanyahu, one of the theory’s biggest adherents, devoutly believed that the right wing enjoyed growing preference over the weakened left, which was losing support due to the collapse of the diplomatic process and the disengagement fiasco. Netanyahu cleaved to the alliance with the ultra-Orthodox and with Liberman, an analytical failure on his part. The even-steven stalemate between the blocs that was revealed the morning after the elections proved that the Israeli public had not moved toward the right.

A parliamentary majority supports an agreement with the Palestinians.

Despite his weakness, there is no governmental alternative to Netanyahu as yet. There is no one in his vicinity, including Bennett and Lapid, that the public perceives as a candidate to replace Netanyahu as government head. Therefore, Netanyahu could attain a majority for a peace agreement — if only he wanted to. The math is easy: At the moment of truth, Netanyahu can bring the Labor Party into the government instead of Naftali Bennett, who would probably quit the government at such a point anyway. Labor Chair Shelly Yachimovich declared that under such circumstances, she would join the government. And together with Tzipi Livni’s HaTenua and Yair Lapid’s Yesh Atid, Netanyahu could create an effective diplomatic coalition. Thus, Obama should know that even if Netanyahu complains about the difficulties his coalition partners cause him, the diplomatic option is still on the table.