Dan Meridor, a former "prince” of the Likud Party, comments to Mazal Mualem on the right-wing turn in the Likud Party and his doubts regarding Prime Minister Benjamin Netanyahu’s ability to lead an important diplomatic process. 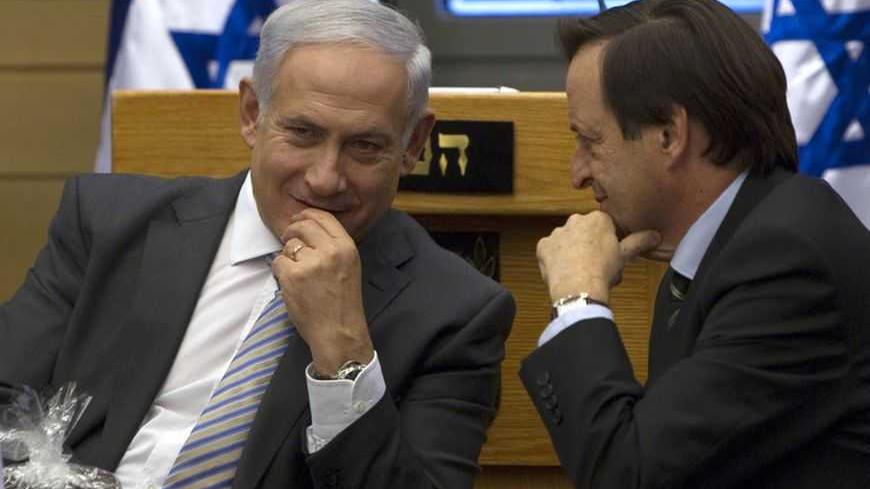 Last winter, old friends Ministers Dan Meridor and Benny Begin sat next to one another at one of the Likud faction’s weekly meetings. The two ministers shrunk into their chairs as they watched yet another fire-and-brimstone performance against the Supreme Court. This one was led by the party’s right-wing department, the darlings of the settlers: Knesset members Tzipi Hotovely, Danny Danon and Zeev Elkin.

Those were the days when the Likud raged over the High Court of Justice’ directive to evacuate the houses of the illegal Migron hilltop outpost, which was built on private land. Elkin and other Knesset Members tried to initiate a “High Court bypass law.” They faced a wall of opposition — Meridor, Begin and Minister Michael (Miki) Eitan who succeeded in thwarting the proposed bill.

“I feel like an alien from outer space,” whispered Begin in Meridor’s ear. Meridor shared Begin’s feelings of disconnection, of being out of the loop or just plain unpopular, as the children say. Less than a year later, on the night that the results of the Likud primaries were received, these three ministers found themselves far from the top of the party’s list for the Knesset. The extreme Right-wing groups who took control of the Likud from the inside — mostly residents of the settlements — sent them packing. Instead, they placed Hotovely, Danon and Elkin at the top of the list. The three champions of the rule of law, derogatorily nicknamed the “bleeding hearts” by former Foreign Minister Avigdor Liberman, stood no chance and were politically eliminated.

On that same night, Prime Minister Benjamin Netanyahu announced that in spite of the primary results, he wanted to keep Begin and Meridor “next to him.” This implied that he would find ministerial roles in his government for them. But even if Netanyahu really meant what he said, once the elections were over he found himself with a shrunken party and a severe deficit in ministerial functions. Thus, there is almost no chance at all for Netanyahu to carry out his initial intentions.

For four years Meridor sat in the Forum of Eight ministers, dealt with the Iranian issue (see the first part of the interview) and felt that he was making a difference. Until the settlers showed him who really runs the Likud.

In the political section of the Al-Monitor interview, Meridor talked about Netanyahu’s painful mistake in joining up with Liberman to establish Likud-Beiteinu and about the prime minister’s surrender to the extreme right. Meridor was doubtful whether Netanyahu would be able to function in a right-wing faction and lead a significant diplomatic process.

Is there even a chance that Netanyahu, as head of a right-wing faction so strongly connected to the settlers, can open negotiations with the Palestinians?

“With the list he has now, Netanyahu cannot lead anything. Therefore he must build a coalition that would facilitate this, despite the problematics involved. But first and foremost, Netanyahu must decide where he wants to go. There is a majority, in the nation and the Knesset, in favor of diplomatic negotiations and achieving a settlement.

"I assume that if he wants to form a diplomatic coalition, he can do so and can find ways to convince the opponents in the faction. Without being cynical, we realize that the prime minister has ways of doing this (Meridor alludes to honorifics and perks). Regarding Liberman I am not worried — he already agreed to a Palestinian state, he went even further than Meretz because he is willing to agree to the 1967 borders.”

Are you able to understand how you lost the Likud?

“The Likud was never a right-wing party, or an extreme right-wing party. Even if you search high and low, you won’t find that [the late Prime Minister] Menachem Begin ever called himself a right-winger. We are a movement that always supported the Supreme Court. Begin defined the Likud as a “national liberal movement” — to express the integration of the national issue with human rights. I think that the Likud should have remained a centrist movement. I think that in the last elections, many people in the political center could have voted Likud if the Likud had only maintained its centrist platform.”

“We lost our opportunity on the army recruitment issue [of the ultra-Orthodox] when [Kadima leader Shaul] Mofaz was part of the government. I think that if we had gone toward that, the centrist parties would not have revived. The Likud could have taken ten mandates from that bloc, and become the largest party even without Yisrael Beiteinu.

"I am saddened that the Likud turned rightward in the nationalistic, ultra-nationalistic direction. I never liked the linkage with Liberman from the start, I thought that the union would harm us. It turns out that I was right. In addition, there were the primaries in the Likud that dealt a severe blow to the liberal camp: Me, Benny Begin and Miki Eitan were thrown out. This was a clear, sharp political statement. When a man like Feiglin is on the list but the liberals are not, that paints the entire party in a different color, and the change was expressed in the election results. The public left the Likud in droves, but I understand why: the party changed its stripes.”

Were you personally offended?

“I am sorry we got to such a place. It’s not good for the Likud, it’s not good for the country. I think it’s an ideological issue. I expressed my opinions in the Likud, also about preserving democracy and human rights and equality and also about the diplomatic process. Evidently they didn’t like it, the issue of the rule of law. Even Benny Begin, who is not willing to surrender one centimeter of “Land of Israel” territory but defended the rule of law, even he was sent packing. That is a very clear statement.

"I am sorry that the equilibrium was lost. When ideals such as ‘democracy,’ ‘human rights’ and ‘rule of law’ suddenly become left-wing concepts, that is very bad.

"It is a fact that I wanted to be re-elected, I competed in the elections. And it is a fact that the Likud electorate thought differently, and I accept the verdict. Other parties offered me spots [on their lists], but I felt it was not the right way to go.”