Hotovely: The New Young Face of the Likud 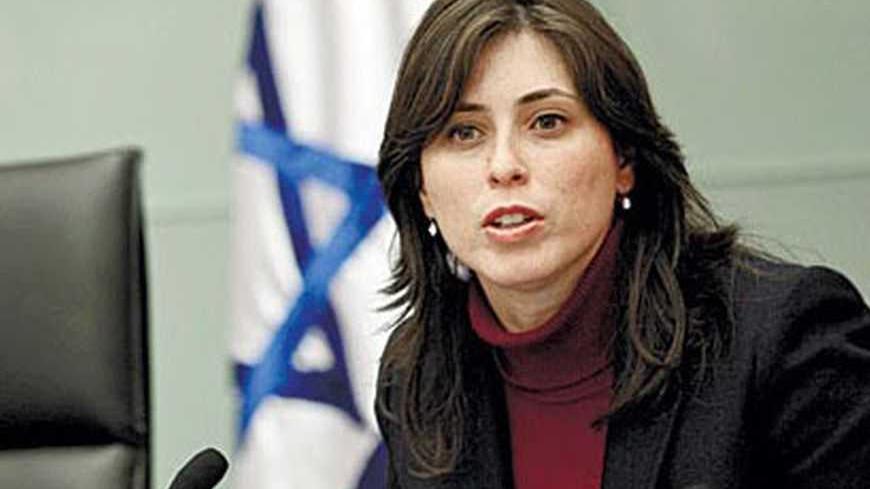 The young MK from Tzipi Hotovely, 34, is being recognized as one of the Likud Party's rising stars, and she gained this prominence without the help of party leader Benjamoin Netanyahu. Photo undated. - indynewsisrael.com

The eve of Nov. 26, about a month and a half ago, was very special for MK Tzipi Hotovely. It was on that date, close to midnight, that the results of the Likud primaries were publicized, and she became the party’s First Lady. The young MK from the Likud (34 years old) had another reason to feel good about herself: she did this without the help of party leader Benjamin Netanyahu — and to be more precise, she did it despite his opposition.

Over the last four years, Hotovely succeeded in angering the prime minister more than once — probably causing him to regret helping her get elected to the outgoing Knesset. In the 2009 elections, it was Netanyahu who helped blaze the trail for the young, 30-year-old television woman toward a realistic place on the Likud’s Knesset list.

Netanyahu was then chairman of the opposition, and was deeply impressed by Hotovely’s performance as right-wing representative on the Channel 10 “Council of the Wise” program. Every week, the program hosted a fiery panel of political commentators. Hotovely, a still-anonymous, religious lawyer succeeded in putting up an impressive fight against the vociferous, aggressive group of men, including former ministers Aryeh Deri and [late] Tommy Lapid, and journalists Amnon Dankner and Gideon Levy.

Hotovely’s weekly appearances transformed her into a popular figure on the right, and Netanyahu recognized this. He looked for new stars for the Likud list, she looked to make her way in politics, and this confluence of interests transformed Tzipi Hotovely into a new Knesset member — and perhaps, in the near future, even into a minister.

Nevertheless, within a short time Hotovely became a major headache for Netanyahu. Her ultra-right-wing positions and the staunch alliance she created with the settlers, created points of friction between her and Netanyahu. Their differences came to the fore mainly: during the settlement construction freeze; during the Bar Ilan speech (when Netanyahu expressed support for the two-state solution); and during the evacuation of [settlers from] Beit Hamachpela in Hebron. Netanyahu felt that Hotovely did not treat him with respect, and that her reactions were too populist and provocative for his tastes.

In addition, Netanyahu regarded Hotovely as the life and soul of the band of right-wing MKs, including Danny Danon and Yariv Levin. According to the prime minister, these are the ones pulling the Likud toward the extreme right, thus causing him strategic damage.

Thus, if you would have asked Netanyahu’s opinion before the Likud primaries, he would have preferred Hotovely off the Knesset list. At a point like this, almost any new, inexperienced MK would re-think their political career and retreat. But not Hotovely.

Netanyahu brought you into the fold, afterwards he distanced you. How did you feel about that?

“I have always followed my inner truth,” she equivocates, “but at the moment, it doesn’t matter. Now we are talking, and our relationship is good.”

In order to understand the extent of her achievement, consider the fact that Hotovely, on her way to the top ten of the Likud list, surpassed veteran minister Limor Livnat and deputy ministers Gila Gamliel and Lea Nass, who have many more years of politics under their belt than Hotovely.

Indeed, when Netanyahu saw her victorious entrance to the Exhibition Park’s congress hall on the night when the primaries results became public, he understood that he could not beat her — thus, it was best to get her to join him.

Netanyahu “rediscovered” Hotovely’s advantages and turned her into his spearhead in his war against Naftali Bennett, leader of the right-wing Habayit Hayehudi party, in an attempt to stop the hemorrhage of mandates from the Likud to the Right.

And Hotovely seems like the perfect cast for this mission: She embodies everything the Habayit Hayehudi successfully markets to the national public — young, successful, religious, updated and an extreme rightist. Since then, she has been privileged to receive personal phone calls from the prime minister every few days.

What did you discuss with Netanyahu the last time?

“In our last conversation, he clarified to me that the goal of his Bar Ilan speech was, first of all, to set limits on the Palestinians, in order to examine the seriousness of their intentions. To what extent are they willing to enter the [peace] process, because the conflict will only come to an end, at the end of the process.”

And what are you supposed to do with this explanation?

“With this explanation I can understand how as a leader, it was important to Netanyahu to present his position these days in the wider context of things, and not continue the derelict path of the Left that wants to hand over achievements to the other side without receiving anything in return.”

Have you considered the possibility that Netanyahu is “using” you now to stop the leakage of votes to Bennett, and that after elections he will distance you again, together with the entire Right-wing camp?

“Netanyahu had done important things for the right, and on behalf of settlement in Judea and Samaria. First of all — recognition of the Ariel University, that is a first-rate strategic gain. It is an ideological statement. On the diplomatic level, the greatest achievement is that the prime minister succeeded in transferring the international center of gravity from the Palestinian issue, to the Iranian issue. Thanks to him, sanctions were imposed on Iran.”

And what about the diplomatic paralysis that characterized his entire term of office? Is that also an achievement?

“On that issue, I am in total congruence with the prime minister. I think that the Palestinian story is tactical, while the Iranian issue is strategic. Netanyahu understood that if we find ourselves in a reality in which a nuclear umbrella is stretched over the heads of the terrorist organizations such as Hamas and Hezbollah — then all the rules of the game would change, and that must be stopped.”

So who is at fault for the paralysis?

“We are not to blame that there are no diplomatic negotiations. It’s the fault of the Palestinians. We clearly see that there is no real diplomatic horizon vis-à-vis the Palestinians. Even former Prime Minister Ehud Olmert, even [Defense Minister] Ehud Barak and also [former Foreign Minister and centrist party Hatenua leader] Tzipi Livni did not succeed in bringing about a permanent settlement — despite the concessions.”

So basically you succeeded. Netanyahu has fallen into line with you and your friends in the extreme right of the Likud. Do you feel satisfied?

“It’s not connected to us. It is the political map in Israel. It’s not that we have moved to the right, it’s that reality has moved to the right. As a result of the [2005] unilateral disengagement plan , which was the political system’s formative event in recent years, the Likud voters came to understand the price of betraying mandates given by the voter. No one wants to return to those places. We, the outgoing Knesset, defended the settlement enterprise because we know that the international community still champions the two-state solution. I do everything so that this solution will not be realized.”

If you are so correct, then why are you losing so many mandates?

“In many ways, the election campaign was decided even before it began. No candidate of stature was offered who could compete with Benjamin Netanyahu, but this advantage turned into a disadvantage. In other words, too many people began to feel that a government under Netanyahu was a done deal. At that point, the campaign went into a spin and problems were created.

We made a mistake when we strengthened our political rival called Naftali Bennett. It was a mistake to attack a party from the right-wing bloc. We shouldn’t have done it, chiefly in light of the government’s accomplishments.”

Exactly what are those accomplishments?

“The Likud, as opposed to other parties, brings to the election campaign a series of achievements and revolutions: in education, in cellular communication, in transportation. There was a very strong government here that did things.”

Apropos government — have you asked Netanyahu to be appointed a minister?

“Not yet, but as the Likud’s first lady I will certainly ask. However, my goal is not that there should be only one woman as minister, as window-dressing. I want many women who will be part of the decision-making apparatus in diplomatic-security related issues as well. Today I am a member of the Foreign Affairs and Defense Committee, and I would very much like to be a member of the diplomatic-security cabinet as well.

“Beyond that, I will be happy to accept any position that the prime minister will confer on me. The position most suitable for me is that of Minister of Public Diplomacy [hasbara] and Diaspora Affairs. That really speaks to me. I have a personal affinity for those issues.”

What do you think about President Peres’ involvement in the elections?

“Peres’ false prophecies have already proven themselves — starting from talk about a new Middle East that never really got off the ground. Reality does not conform to his visions. Beyond that, it really bothers me that the president, who is supposed to be a non-partisan figure that unites the country, interferes in the elections.”

You are known mainly by virtue of your ideological struggles in the outgoing Knesset, even though you were also active in legislation for women’s interests.

“As chairperson of the [Knesset] Committee on the Status of Women, I was partner to the revolution in education. The fact that today there is a free education from the age of three, is the accomplishment of our government and I view myself as part of this success. We still have a long way to go in Israel to increase women’s representation in the Knesset and the government.”

Yet you attempted to invalidate MK Haneen Zoabi’s candidacy for running for the next Knesset. How does that fit in with your aspirations to increase women’s representation in the Knesset?

“I thought that her tenure in office should have been disqualified. I hold no esteem for people in the Israeli parliament who use it as a tool to undermine the state. I would be happy to see Arab women in the Knesset, but I am not happy when people like her [Zoabi] and Azmi Bishara [former Knesset member and (founder of the Israeli-Arab Balad party —m.m)], who work in the service of terrorist organizations, sit in the Knesset.”

You can’t value her as a trail-blazing Arab woman?

“I don’t see anything positive about someone standing out for negative actions, even if it is a woman. With all due respect, there is no law sponsored by her and the only thing she did to stand out, was joining the Marmara terror flotilla. So where’s the great honor in that?”

What position do you aspire to, in the distant future?

“My greatest dream is to be Education Minister. Then I will be very happy.”

Mazal Mualem started her journalistic career during her military service, where she was assigned to the Bamachane army weekly newspaper. After her studies, she worked for the second leading Israeli daily Maariv. In 1998 she joined Haaretz, covering local governance, and later, she was appointed chief political analyst of the paper. After 12 years with Haaretz, she returned to Maariv as their chief political analyst. Parallel to her writing activities, Mazal Moalem presented a weekly TV show on social issues. Mazal Mualem holds a masters degree from the Tel Aviv University in security/political science. She lives with her daughter in Tel Aviv.