Israeli Prime Minister Benjamin Netanyahu is giving important jobs to the far-right wing of his party's Knesset members, perhaps to soften them up for diplomatic engagement with the Palestinians, Mazal Mualem suggests. 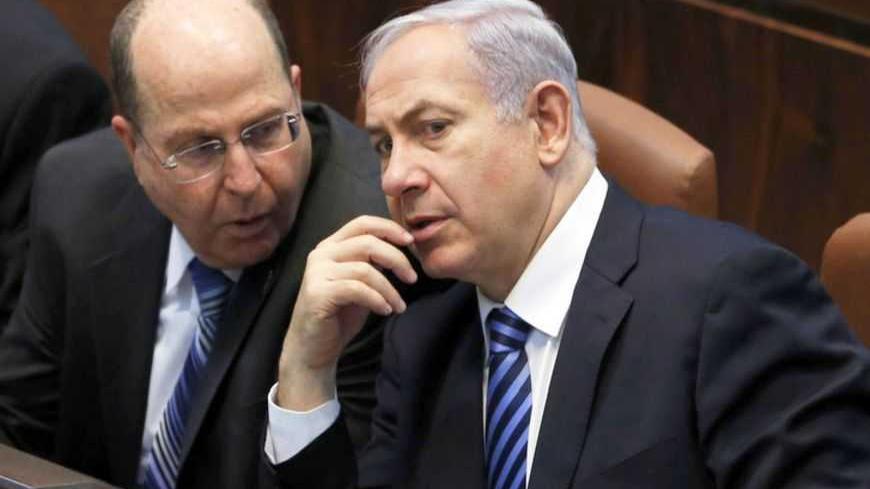 New Likud Knesset member Moshe Feiglin is one of the symbols of the far right in Judea and Samaria. For years, Prime Minister Benjamin Netanyahu went to great lengths to prevent Feiglin from getting into the Knesset. The prime minister viewed Feiglin and his coterie, disparagingly called the “Feigliners,” as aliens trying to take over the Likud.

Netanyahu was concerned that Feiglin’s name on the Likud list would infuse the entire list with an extremist tinge and drive voters away from the party. Thus, the prime minister blocked Feiglin from every direction. But Netanyahu’s powers deserted him in the latest primaries, and Feiglin succeeded in being voted into a viable spot on the party’s Knesset list. The Likud’s dismal showing in the January elections proved that Netanyahu’s fears were justified. Voters fled from Likud in droves, causing it to contract as a result. Feiglin, meanwhile, became a Knesset member.

Now, as if he had not fought for years to exclude Feiglin from the Likud, Netanyahu appointed him as deputy Knesset chairperson on March 18. This position has great symbolic power and brought a smile to Feiglin’s face. Netanyahu believes that this is the way to silence the internal opposition. In his new capacity, Feiglin is most likely to conduct himself as would befit a non-partisan statesman and refrain from rushing to call for a boycott of President Barack Obama’s speech [on March 21] so long as Jonathan Pollard remains behind bars – which is exactly what he said two weeks ago in his first Knesset speech. The big question is, how long will this statesmanlike behavior last?

Other Likud Knesset members who, like Feiglin, are viewed as representatives of the settlers, also got appointments. Word is circulating in the Likud that the prime minister is preparing for a serious diplomatic blitz with the Palestinians, therefore, he is taking pains to put his party’s political opposition to sleep.

One way or the other, it seems that Netanyahu followed a deliberate plan not to skip over anyone. Here’s the list: He nominated Knesset member Yariv Levin to the key position of coalition chairperson. Levin is a genteel fellow with extreme right-wing views who calls for clipping the Supreme Court’s wings “because it is a left-wing organ.” Levin also called the ten-month (2009–2010) construction freeze in the settlements a “low point, and a non-Jewish act” and announced that he would fight another freeze.

The outgoing coalition chairperson, Knesset member Zeev Elkin, shared a close relationship with the settlers during his previous term in office. He, too, was upgraded. Elkin will serve as deputy foreign minister in a ministry that currently lacks a minister. (Avigdor Liberman, who holds the portfolio, is in the midst of legal proceedings against him.) Like Levin, Elkin also opposed the construction freeze and the Migron outpost evacuation and took an active part in the attempts to pass a law to legitimize the illegal outpost, thus sidelining the High Court of Justice.

Knesset Member Danny Danon is another “upgraded” merry camper. He is a popular figure in the Likud in general and among the far right and the settlers in particular. Danon attained fifth place on the Likud’s Knesset list and was appointed to the distinguished position of deputy defense minister, under Moshe (Bogie) Ya’alon. Netanyahu hopes that once Danon is ensconced in his spacious office, he will eschew the vociferous opposition voices on diplomatic issues, the voice he assumed throughout the previous term of office.

We can assume that Danon, known for his negative attitude toward Obama, will no longer cause diplomatic brouhahas as he did in the past. For example, after Obama was reelected, Danon declared, “Israel won’t kowtow to Obama.” At another opportunity, he argued that “Obama caused harm to the United States because his foreign policy was naïve and defective, as he gave precedence to the Arab world over the Western one.” During the construction freeze in the settlements he announced that “Obama should know that Israel won’t pay the price to justify a Nobel prize.” Danon settled into his new job at Defense Ministry headquarters on March 19. The odds are now against Danon embarrassing Netanyahu by portraying the American president as an enemy of Israel. That is an achievement in itself.

Knesset member Tzipi Hotovely, another favorite of the extreme right, was also promoted. She received the keys from Netanyahu as deputy transportation minister and appeared to be satisfied. Thus the prime minister can check her name off the list as well. Hotovely’s zone will be quiet regarding Obama’s visit.

Knesset member Miri Regev was a fervent opponent of Netanyahu on social-diplomatic issues throughout his previous term in office. She, too, received a political hug from him and on March 18 was appointed chairperson of the Knesset’s internal affairs committee. She was as happy as can be.

In another, not-so-long-ago era, this crew would never have let Obama’s visit slip away from them. From their point of view, it would have been a one-time opportunity to garner political capital by exhibiting hostile responses and giving scathing interviews in the media to prove to their extreme right-wing constituents that they are beholden to them.

But as mentioned, things certainly look different from the heights of their new positions. Therefore, if Netanyahu really embarks on diplomatic negotiations with the Palestinians — as per his coalition agreement commitment and as repeated by him at the joint press conference on March 20 with Obama in Jerusalem — then the positions he so generously lavished on the right-wing Knesset members in his party might give him some intra-party peace and quiet.

At least, for a while.

Mazal Mualem began her journalism career during her military service, when she was assigned to the Bamachane weekly newspaper. After her studies, she worked for Maariv and Haaretz.