In an interview with Mazal Mualem, Deputy Defense Minister Danny Danon promises to help the settlements in the West Bank and to institute compulsory national service for Israeli-Arabs. 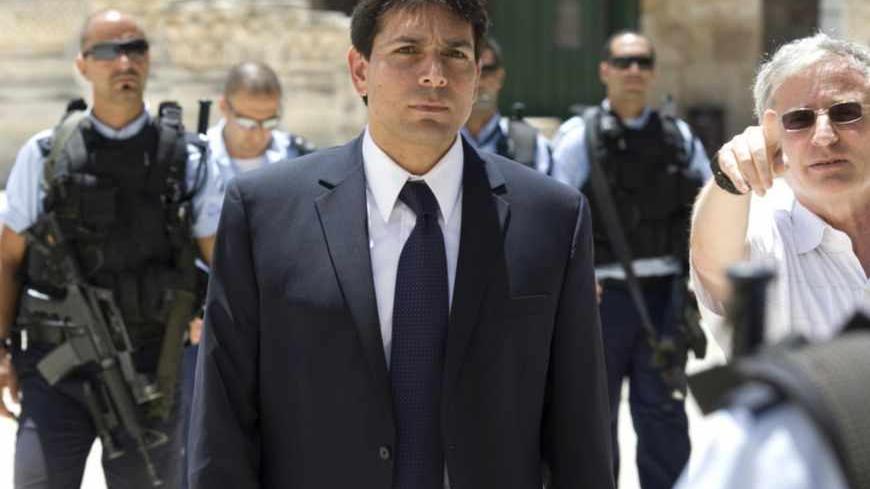 Deputy Defense Minister Danny Danon is busy these days dealing with the problem of the cemetery in Ariel settlement in Judea and Samaria. There are only four remaining burial plots and he is trying to expand the cemetery.

At his office at the IDF headquarters in Tel Aviv, Danon is still getting used to his new job. Nonetheless, one thing has been clear to him since his first day in office: he intends to help the settlements in Judea and Samaria, those he feels were harassed by former Defense Minister Ehud Barak.

Defense ministers are in charge of approving construction in the settlements and Danon hopes the Ariel cemetery problem will soon be solved given that unlike Barak, his successor Moshe (Bogie) Ya’alon is committed to the settlement enterprise. In an interview with Al-Monitor, Danon promises to advance the approval of all the building plans which he claims were held up by Barak.

Danon, 42, came in fifth in the Likud primaries held last year (Nov. 26, 2012), ahead of senior government ministers, among them Ya’alon himself, his boss at the defense ministry who came in 7th. This achievement is the result of his activism in the political and media arenas and his support for the far right-wing Likud membership in Judea and Samaria. This is what landed him is current job. But anyone who knows Danon knows, too, that he is not there simply to warm his chair at the defense ministry.

Danon belongs to the group of young Likud Knesset members, along with others like Deputy Minister of Transportation Tzipi Hotovely and Deputy Foreign Minister Zeev Elkin, who form the hard core of the right wing. Like him, they, too, were elected to top slots in the Likud primaries and were upgraded by Prime Minister Benjamin Netanyahu to positions of deputy ministers. As previously mentioned here, Netanyahu gave them cushy jobs to buy himself peace and quiet on the diplomatic front from this strong group that during his previous term caused him many headaches from within the Likud.

For now, Netanyahu’s political conduct appears to be sound. President Barack Obama's visit came and went quietly, as did the visits of Secretary of State John Kerry and Defense Secretary Chuck Hagel.

As a Knesset member for the Likud you fought against previous Defense Minister Ehud Barak throughout his term. You claimed he was harming the settlement enterprise for ideological reasons. Now that you’re at the defense ministry, have you found proof of this?

“Certainly. Barak delayed construction. The main problem is that all those involved in the settlement enterprise have gotten used to operating according to the winds blowing from the top. The new challenge is to convey the message that there are new winds blowing at the IDF headquarters in Tel Aviv, both from the direction of Defense Minister Ya’alon and from mine. I regard the settlers as a boon, not a burden. We need to do as much as possible to strengthen the settlements — all by the book, of course.”

What exactly did he delay?

“At every settlement I visit people come up to me and tell of plans that were approved but were held up by Barak. This was the case with the Ariel College, as it was called at the time. Barak was forced to give his approval to the college becoming a university only under heavy pressure. And there are other such cases. I was amazed to discover that, as of the end of the week, there are only four remaining burial plots at the cemetery in Ariel. It’s a big place and some of the population is not young, and it’s really a distressing problem. Expansion of the cemetery was approved a long time ago, but Barak refused to sign the building plans. You have to understand — we’re not talking about illegal construction, but about providing basic civic services in the main settlement blocs. There’s also a neighborhood in the settlement of Elkana that has been approved but delayed by Barak, and many additional plans.

Construction in the West Bank could create tensions with the US just as the relationship has started to improve.

“I don’t think so. We’re talking about places that are not considered diplomatically sensitive. We respect the democracy in the United States and they have to respect our democracy and our commitment to our citizens. The Likud, as well as the HaBayit HaYehudi party, and even Finance Minister Yair Lapid, who launched his election campaign in Ariel, support the continued existence of the settlement blocks. The new government is a more national one, and the reason is that Barak is not a member of it.”

How will you react if it turns out that Netanyahu is leading a diplomatic move?

“I don’t see it happening right now. If it’s going on, it’s probably happening underground. Right now everyone is busy with Syria, Iraq and Lebanon. My assessment is that as far as the ruling coalition is concerned, there will be differences between words and deeds vis-à-vis a diplomatic move. In other words, as long as Netanyahu conducts negotiations, he won’t have a domestic problem, but if he decides on another settlement freeze, that’s already a different story. That will be a problem for HaBayit HaYehudi, as well. But for now we haven’t seen additional American pressure or any activity on the part of the prime minister.”

On another front, in recent days Danon has been leading a move within the Likud-Beiteinu Knesset faction to legislate compulsory national service for the Israeli-Arab citizens. The law would complement a proposed bill to draft the country’s ultra-Orthodox Jews, scheduled to come up for Knesset approval at the beginning of May. Danon, who will present his demand at the weekly Likud-Beiteinu meeting on Monday (April 29), is trying to enlist the support of additional Knesset members for the move, which is likely to stir a heated political and public debate. This is a loaded, explosive issue. Danon claims that the Likud, as a national democratic movement, cannot condone such an asymmetrical situation.

The demand to draft Israeli-Arabs into the army, along with drafting the ultra-Orthodox, was raised in the past by former Foreign Minister Avigdor Liberman. That’s the reason his representatives torpedoed the deliberations of the Plesner Committee, established in May 2012 to formulate recommendations on the draft issue.

The Plesner Committee determined that one could not deal with the draft of the ultra-Orthodox with the same level of seriousness as that of the Arabs, that each requires totally different preparations.

“It’s possible, and how. I think it’s wrong to focus only on the ultra-Orthodox. We have a government that is changing the order of things, heading for big moves. It is not earth-shattering if we deal with this issue, too.” And Danon adds: “I don’t like the language and the style being used toward the ultra-Orthodox, while ignoring the fact that some 20% of Israel’s population, that do not contribute, are Arabs. This serves an agenda. I’m not saying the Arabs should be forced to join the Golani Brigade or the border police, but they should definitely do national service in hospitals, senior homes and public institutions.”

Whose agenda does this serve?

“Certainly not the Likud’s. We’re coming at this issue with an approach of real equality and not hatred of the religious. The minute you sever the link between the two things and threaten the ultra-Orthodox with imprisonment if they don’t enlist, and at the same time ‘display sensitivity’ toward the Arabs – that’s a problem. I’d like for the left-wingers who have become active in Yesh Atid party to display the same kind of ambition they display toward drafting the ultra-Orthodox also toward drafting the Arabs.”