Israel's next defense minister, Moshe Ya’alon, is not expected to challenge Prime Minister Benjamin Netanyahu on the Iranian threat or the Palestinians issue, writes Mazal Mualem. 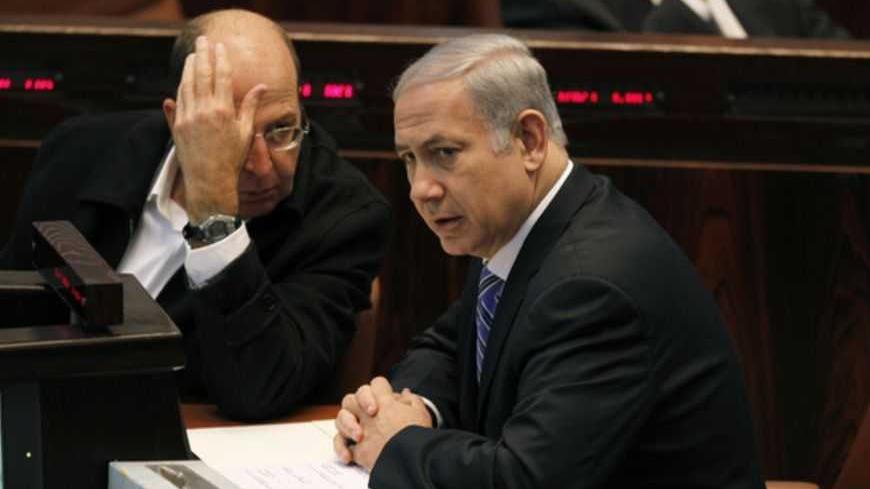 Four years after his dream was shattered, Moshe "Bogie" Ya’alon is expected to step into the shoes of one of the most dominant and influential defense ministers who ever served Israel — Ehud Barak.

For the former chief of staff, who was forced to make do for the last four years with the “Strategic Affairs” portfolio that had originally been created for his predecessor, Avigdor Liberman — this not only represents the closing of a circle. This is also a personal victory over Barak, his bitter rival. At a number of points in closed meetings, Ya’alon warned others about what he viewed as Barak’s lack of discretion; he saw Barak as a dangerous party, a troublemaker without inhibitions who is not committed to Israel's national interests and who, during his tenure as chief of staff, brought evil winds into the IDF’s General Staff.

Although Ya’alon is seen as the natural candidate for the position of Likud defense minister, Prime Minister Benjamin Netanyahu would certainly prefer to have Barak serve another term, despite the tension between them. This is for two reasons. First, Barak is still Netanyahu’s highest-ranking and most intimate partner in his struggle to halt the Iranian bomb. Secondly, while Ya’alon yearns to inherit Netanyahu’s position one day, Barak has no such aspirations, due to his age and shaky public status.

A unique political constellation emerged that played into Ya’alon’s hands: None of the future coalition partners demanded the prestigious defense portfolio. Yesh Atid leader Yair Lapid demanded the Foreign Ministry but finally compromised on the treasury, while HaBayit HaYehudi leader Naftali Bennett, who had desired the treasury, made do with the enlarged Ministry of Industry, Trade and Labor. The truth is that none of them viewed themselves as the appropriate choice to head the defense pyramid. Perhaps they learned from the bitter experience of Amir Peretz in the Defense Ministry, under Olmert’s tenure as prime minister during the Second Lebanon War.

And thus the road was paved for Ya’alon (barring last-minute surprises) to ascend to the 14th-floor heights of the Defense Ministry building in its Hakirya, Tel Aviv headquarters.

It is true that Ya’alon is one of the Group of Eight members (the "Octet" forum that convenes on diplomatic and security issues) who opposed an Israeli strike on Iranian nuclear facilities without American backup. Nevertheless, over the last few months, he seems to have found a way to ensure support by the United States while also siding with Israel’s right and duty to defend itself. So as far as this issue is concerned, Netanyahu can rest easy: Ya’alon has no intentions of tripping him up on the Iranian issue. On the contrary, he will be Netanyahu’s partner. His recent statements, including in private talks, verify this.

The designated defense minister is a relatively new political player. He joined the Likud less than five years ago and has already become a very senior minister, a fact that upgrades his position among strong politicians like Education Minister Gideon Sa’ar and Transportation Minister Yisrael Katz.

At the beginning of his Likud period, Ya’alon was viewed as a strange bird who flirted with the most right-wing faction of Judea and Samaria, headed by Knesset Member Moshe Feiglin. As a result, Ya’alon got into trouble with Netanyahu. Over the last year he has distanced himself from them, but Ya’alon is still considered a political hawk and the next candidate to lead the national camp after the Netanyahu era.

Despite this, Ya’alon has enjoyed relative closeness with Netanyahu over the past year. As relations between the prime minister and Barak deteriorated, Netanyahu's relationship with Ya’alon improved. For example, he sent Ya’alon to deal with the settlers’ opposition to the Migron outpost evacuation. Netanyahu also appointed Ya’alon as his representative to head the team to draft a solution for bringing the ultra-Orthodox into the IDF.

As Ya’alon himself has said on a number of occasions, his worldview regarding negotiating with the Palestinians underwent a radical change in 1995, when he served as head of military intelligence and was exposed to the repercussions of the Oslo Agreements. As someone who was educated on the values of the Labor movement and spent most of his adult life as a kibbutz member, Ya’alon backed the Oslo Accord — but later admitted his mistake. From his recent statemens, it seems that he supports normalization of relations but does not believe that a settlement can be reached with the Palestinians.

In the course of the election campaign, Ya’alon explained why he changed his attitude toward the Palestinians, saying, “To my regret, I supported the Oslo Agreements. But as head of military intelligence, the full picture was revealed to me and I understood that the more land we concede, the more we put people at risk. This is our history. Every time a proposal was raised to partition the land, the other side started a war. Every time we expressed willingness to give up territory, terror rose to new heights.”

Ya’alon denies the underlying premise that the fundamental conflict existing between Israel and the Palestinians is territorial in nature. He feels that Israel’s left-wing leaders convinced the world that this is the reality, and that a return to the 1967 lines will bring an end to the conflict.

“I already understood back in 1995,” said Ya’alon this week, “that this is not the story. Even in Oslo, late Palestinian Chairperson Arafat viewed the return of territory as only one stage in his doctrine of stages. Whoever understands this can also explain why Palestinian President Abu Mazen does not want to reach the negotiating table.”

As far as Ya’alon is concerned, “peace” is a word with nothing more than sentimental meaning. He said, “Unfortunately, the word ‘peace’ has been ruined in recent years. When you say ‘peace’ to the average Israeli, he immediately thinks about what territory we can concede in return for nothing; when he hears ‘peace,’ he immediately thinks [in which Arab country] we can spread humus [and eat in peace]. But evidently we will have to settle for spreading our own humus on our own bread, which is not bad at all.”

And what does he think about new American Defense Secretary Chuck Hagel, who is a controversial figure among Israeli leadership? When asked about the man and his intentions at a recent political gathering, Ya’alon said, “I have been closely, intimately familiar with Israel-United States relations for the last 17 years. This is not a one-way relationship. It’s not only us that enjoys this strategic alliance. The Americans also benefit from it. Anyone who is nominated to these kinds of positions, whether as president or defense secretary, understands the importance of Israel as a strategic asset.”

He added, “We had a difficult period at the beginning of the term of office. We heard all kinds of things from the administration that caused disagreements and disputes. For example, they told us that the Israeli-Palestinian issue is a source of instability in the Middle East. I don’t think that there are many who still say things like that. They understood that not everything that happens in the Middle East is because of us.”

And what does Ya’alon think about the possibility of an independent Israeli strike against Iran?

“The military option is the last option. Before that, we must exhaust all other means and prepare for all scenarios. After all, if we are not for ourselves, who else will be for us?”