Prime Minister Benjamin Netanyahu's security cabinet meetings will now include new, inexperienced members, and it is with them that he will have to make fateful decisions, writes Mazal Mualem. 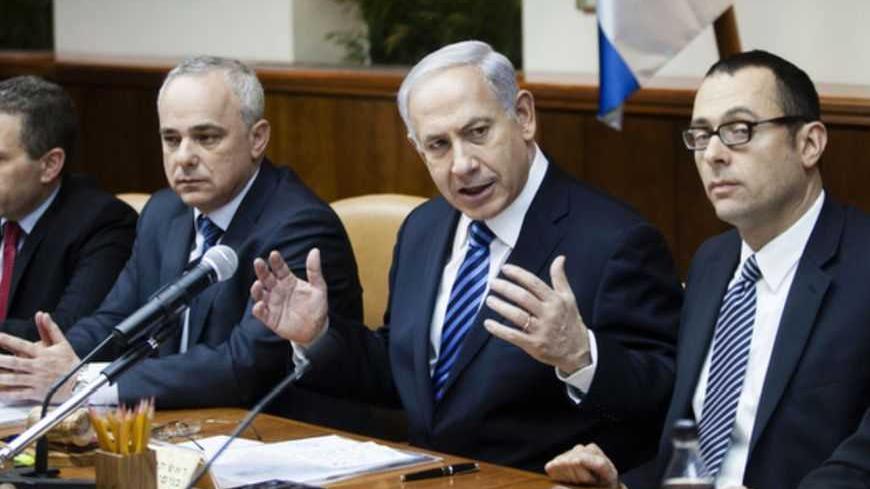 In the recent elections, Prime Minister Benjamin Netanyahu lost a lot more than his ultra-Orthodox partners, who had provided a coalition safety net for him. On Monday evening, March 18, at the swearing-in of the new government, Netanyahu sadly bade farewell to the octet members — the experienced and highly regarded members of the defense forum who had surrounded him in the last four years.

In his third government, which started operations this week, Netanyahu decided to cancel the octet and transform the diplomatic-security cabinet into a highest-level security forum.

Netanyahu and his octet members had accumulated hundreds of discussion hours deep into the night on security-related issues, largely on the Iranian nuclear crisis. But from this moment on, every time Israel’s prime minister looks around at the members of his pared-down diplomatic-security cabinet, he will see young, inexperienced people. They will be his partners in the most difficult, harshest decisions, perhaps even the most dramatic of them all — to attack or not to attack.

In fact, this is one of the least experienced cabinets in the annals of Israeli governments.

An erroneous response could turn the region into a raging maelstrom.

In his speech to the Knesset on Monday, before swearing in the new ministers, the prime minister outlined the constellation of threats facing Israel and emphasized that their importance cannot be overstated. “They might even be greater than anything we have encountered since the establishment of the state, including the harshest chapters we endured in the early decades of our independence.”

New Finance Minister Yair Lapid and Economy and Commerce Minister Naftali Bennett have not yet completed their first month as Knesset members. Neither of them has ever gotten close to key decision-making circles. While Home Front Security and Communications Minister Gilad Erdan is starting his second term of office, he has never taken part in security forums before. The three of them, all in their forties, comprise a grand total of half of the cabinet members, which number six people, aside from Netanyahu.

The two additional members are Justice Minister Tzipi Livni and Public Security Minister Yitzhak Aharonovitz. True, Livni has sat in the past on the most restricted security forums. She was party to the decision to wage the Second Lebanon War, and to the Cast Lead operation during former prime minister Ehud Olmert’s tenure. And Aharonovitz, as public security minister, was also partner to security-related cabinet consultations and decisions. But Netanyahu had never valued their opinions before.

Out of the entire group, the only person with whom the prime minister can share the heavy burden, the only one he can rely on for counsel and experience, is Moshe (Bogie) Ya’alon, the incoming defense minister. Netanyahu has never expressed any special affection for the former chief of staff from his party, and preferred Ehud Barak as defense minister. Nevertheless, Ya’alon will now become Netanyahu’s only support in the cabinet. He is the only one among his compatriots who had been a member of the octet. In that capacity, he had taken part in marathon discussions regarding the military option for Iran.

Ya’alon had also been partner to the decision regarding the the attack in Syria about two months ago. According to foreign sources, this strike was carried out against a Syrian convoy that was transporting antiaircraft missiles to the Hezbollah organization in Lebanon.

But the Iranian nuclearization issue is not the only one awaiting the inexperienced cabinet. They face a series of decisions, sometimes on a daily basis, regarding operations and assaults — some of which we may never know about. The cabinet members will be required to decide on the nature of responses to unexpected events that may take place in an unstable environment. It could be a sudden escalation in Syria or Egypt, or a third intifada. Soldiers could be kidnapped, a rocket attack could emerge from Gaza, an embassy abroad could be targeted. All these are completely realistic scenarios, and an erroneous response could turn the region into a raging maelstrom. As inexperienced as they are, the new cabinet members may not even have one day of grace.

Lapid, who was a popular and talented television presenter until a year ago, is a newbie politician. The recent elections transformed him into a man with great political power, and one of the three highest-ranking ministers in the government. Bennett also swept many people off their feet. However, both men’s knowledge of security and defense matters are on about the same level as that of the average newspaper reader.

And if that is not enough, Netanyahu has no real idea about the power relations in the cabinet regarding the Iranian issue, the issue that is more important to him than anything else.

In fact, Netanyahu did not have to bear the entire weight of security responsibility alone over the last four years; defense minister at the time Ehud Barak was always at his side. Even though there were periods of tension between them, they usually worked in sync together. This included frequent, lengthy face-to-face meetings, an always-open hotline and tremendous elbowroom for Netanyahu's defense minister. Together, this twosome led the campaign against Iran and headed the supporters of a military operation against it.

Aside from Barak, Netanyahu was always able to consult with ministers Benny Begin and Dan Meridor from his party, who were appointed to deal with intelligence issues. They had two prominent advantages, from Netanyahu’s view: They both lacked political ambition and thus did not pose a threat to him, and both had tremendous experience in security and policy issues. Meridor had served as secretary of the cabinet under former prime minister Menachem Begin, who had made the auspicious decision in 1981 to attack the Iraqi reactor and the less auspicious decision to start a war in Lebanon, a war that led to years of complex military and diplomatic entanglement.

Despite their different perspectives on the Iranian issue, Netanyahu much valued Meridor and Begin’s reasoning and discretion; these two were a bulwark against those who favored an attack. Netanyahu also had former foreign minister Avigdor Liberman in the octet, a man who for the last 20 years had been either close to or within the restricted forums that made diplomatic and security decisions. Contrary to his inflammatory image, Liberman supported a restrained response on the Iran assault issue. A place is reserved for Liberman in the next cabinet and he can return to it if acquitted in the legal proceedings he currently faces.

When Barak bade farewell last week to the Knesset’s Foreign Affairs and Defense Committee, he took pains to mention Meridor and Begin’s exceptional contribution to state security. Ministers Eli Yishai and Avigdor Liberman also brought much experience under their belts.

Thus, these surroundings gave Netanyahu peace and quiet. By virtue of his former octet partners, he allowed himself to wage an unprecedented duel against the heads of the defense and intelligence establishment — Mossad Head Meir Dagan, Shin Bet chief Yuval Diskin and Chief of Staff Gabi Ashkenazi — who persisted in their opposition to an attack.

Under the new circumstances that have evolved, Netanyahu no longer has this privilege. He cannot rely on Ya’alon alone, but will also have to consult with the chief of staff and the heads of the Mossad and the Shin Bet on the closest of terms. He needs them now more than ever.