Associates of former Prime Minister Ehud Barak leaked tapes indicating that Barak supported an attack on Iran in 2012, but other sources suggest that he then changed his mind and was the person who actually blocked an eventual strike. 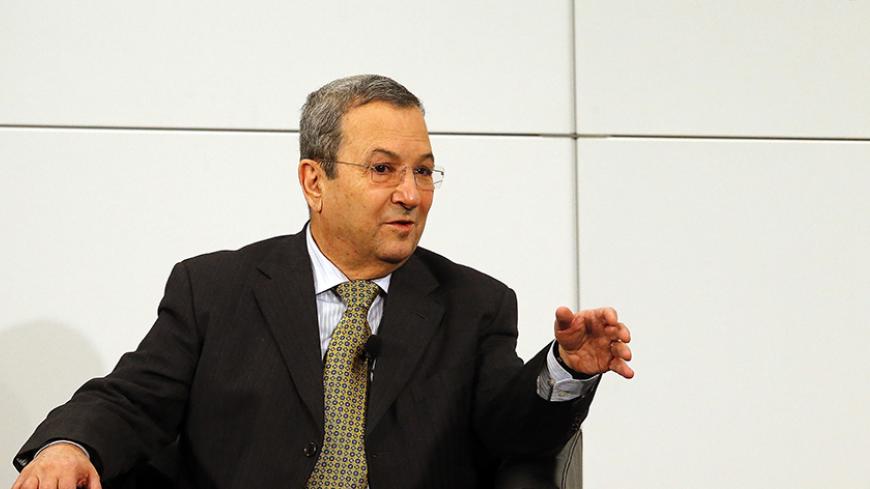 The contents of audio recordings belonging to former Israeli Defense Minister Ehud Barak were leaked to the media Aug. 21. In the recordings, Barak explains why Israel did not attack Iran’s nuclear facilities in 2012. Fussing immediately ensued, but it is unclear what the ruckus is all about. The vast majority of the information had previously been published in numerous media outlets, including in Al-Monitor.

No one, not at the Pentagon nor in Iran’s Islamic Revolutionary Guard Corps, needs Barak to confirm that Israel did, indeed, prepare itself for several long years to launch an assault on Iran’s nuclear infrastructure. It is also no secret that the decisive years were from 2009 to 2012. Every summer, between July and September, during those years, the suspense index rose to new heights. According to analyses, the weather during those months was favorable for an assault, which was supposed to last several consecutive days. Even the differences of opinion in the “forum of eight,” the select group of senior ministers assembled by Prime Minister Benjamin Netanyahu to formulate strategy regarding Iran, were widely disseminated.

Netanyahu did not succeed in cobbling together a majority in the forum that favored an attack. His plan was opposed by Dan Meridor, Moshe “Bogie” Ya’alon, Bennie Begin, Eli Yishai and afterward Yuval Steinitz as well. That is why Netanyahu never even convened the full diplomatic-security cabinet to discuss the issue.

According to Israeli law, the only entity that could authorize a strike on Iran is the Cabinet. The forum of eight had no constitutional powers except for studying the issue or, as the top brass of Israel’s defense system used to say about the forum's frequent sessions, “holding a comprehensive seminar on the subject.”

The added value of the current publicity is that we are hearing the voice of one of the decision-makers at the time in Israel. In the wake of a wave of criticism that he is leaking state secrets, Barak now claims that the recordings were for internal use only and were leaked against his wishes. Some people even believe him.

It is clear what Barak’s motives are in the current tempest he is generating. Barak is a person who has a high regard for history, history books and biography. Two of his long-term associates, Ilan Kfir and Danny Dor, are laboring over a Hebrew-language biography, “The Wars of My Life,” on his behalf. Barak is fighting for a place in the history books, but also trying to improve his political position. He is trying to organize a political comeback despite being viewed for quite some time as a has-been, a political relic of the past.

The current episode reflects Barak’s awkward attempts to place himself on the “politically correct side” of the Iranian divide. Now that even Barak understands that the nuclear agreement with Iran is a done deal, he is trying to rewrite the past. He claims, retrospectively, that he was the one who pushed hard for an Israeli assault on Iran’s nuclear facilities. He now asserts that he lost out to his opponents: Lt. Gen. Gabi Ashkenazi, the then-chief of staff of the Israel Defense Forces (IDF), and a few faint-hearted politicians, that is, current Defense Minister Ya’alon and current Energy Minister Steinitz. This is the story that Barak told, in his own voice, to his two ghostwriters, who leaked the recording to Israeli TV Channel 2. As Barak likes to say, the rest is history.

Here is a summary of what was revealed on the recordings: Barak says that he and Netanyahu had considered an attack on Iran several times. In 2009, the operational plans were not yet in place, but in 2010, “at the critical stage, it was still Ashkenazi. When we got to the point in time when we wanted to check if we could transfer [the nuclear discussions] from the three of us — Bibi, myself and [then-Foreign Minister Avigdor] Liberman — to a [wider] discussion in the forum of eight … [and] afterward to a discussion in the Cabinet. And then at the critical moment, the IDF’s answer was that the accumulated capability does not meet the [required] threshold. … The chief of staff has to confirm that the IDF has the necessary operational capabilities.”

Barak describes the secret meetings, the various sessions and forums, and says that without the support of Ashkenazi, the issue could not be brought to a discussion in the forum of eight and after that in the Cabinet.

“A year later it was already [Chief of Staff Benny] Gantz,” says Barak, “He said: We have the [operational] capability. You are aware of the limitations, everything, all the risks involved. Bibi, Liberman and I supported the operation and also felt it was ready to be presented to the forum of eight. If there’s no majority in the forum of eight, there’s no legitimacy to bring it to the Cabinet. … Bibi was supposed to confirm, during the lengthy talks he held with each of them (in the forum of eight), [especially] with Bogie and Steinitz, where they stand on the issue. Then at a certain stage, in the consultations between us, Bibi said they support it, that it’s OK. And then we convened a discussion in the forum of eight.” Barak later describes how, in the course of the discussion, when the heads of the security branches presented the difficulties and risks involved in a strike on Iran, the majority he and Netanyahu thought they had dissolved. “[I saw in front of my eyes] how Bogie and Steinitz were melting,” according to Barak’s picturesque description. That is how, according to Barak, the assault on Iran was ruled out.

This is Barak's version. Out of all the members of the forum of eight, he is the only one who believes it. The true story is totally different: Ya’alon and Steinitz were never in favor of a strike on Iran’s nuclear facilities. They had been pressured, as had others, but without success. Nevertheless, their support was not necessary. In those days, Netanyahu also held long and detailed conversations with the members of his Cabinet. The prime minister could have consolidated a majority in the Cabinet to carry out the assault. The forum of eight was only a kind of think-tank forum, without actual voting and decision-making powers.

There’s even more: In reality, the person who averted the strike against Iran is none other than Barak himself. He was the one who supported a strike almost from the beginning, when he realized that it was the most formative and policy-shaping issue in Netanyahu's eyes. He was the one who promoted the assault from 2009, when Netanyahu entered the prime minister’s office, until summer 2012.

In August 2012, in an interview with Haaretz, Barak outlined a forceful, militant, even historical position and threatened that in the very near future, Israel would be forced to act alone. Then two or three weeks later, he left for a trip to the United States and then went back on his word. Barak’s U-turn, which had not been coordinated with Netanyahu, enraged the prime minister's office, to say the least. Barak had simply abandoned Netanyahu on the Iranian front, capitulated to heavy American pressure and began making completely different statements, saying that Israel could not afford to forsake its alliance with the United States and must take into consideration the interests of its greatest and most important friend.

The Israeli defense apparatus went through a transition period in 2012. Ashkenazi, Mossad chief Meir Dagan, Shin Bet head Yuval Diskin and IDF intelligence unit leader Maj. Gen. Amos Yadlin left their positions during the course of 2011. Their spots were filled with newcomers, as was that of the head of the IDF. These newbies lacked experience and political clout. Meanwhile, US President Barack Obama was busy in a fight for re-election. If Netanyahu had really and truly wanted, if he had been able to summon the requisite strength of mind, 2012 would have been the year of the great attack. Neither Steinitz nor Ya’alon could have prevented it. If Netanyahu had had beside him the strategic partner he believed he had in Barak, it might have actually happened. In both cases of "if," however, it was not to be. Netanyahu did not have the guts, and Barak simply changed his mind. That is why Israel didn’t attack Iran in 2012.

By the way, according to all the assessments, if Israel had carried out the attack, Iran would already be a nuclear state today.