Has Israel found its savior?

The publication of recordings of former Prime Minister Ehud Barak blaming Israeli politicians for blocking an attack on Iran may have been designed to rebuild his image as Mr. Security and portray him as the only alternative to Prime Minister Benjamin Netanyahu. 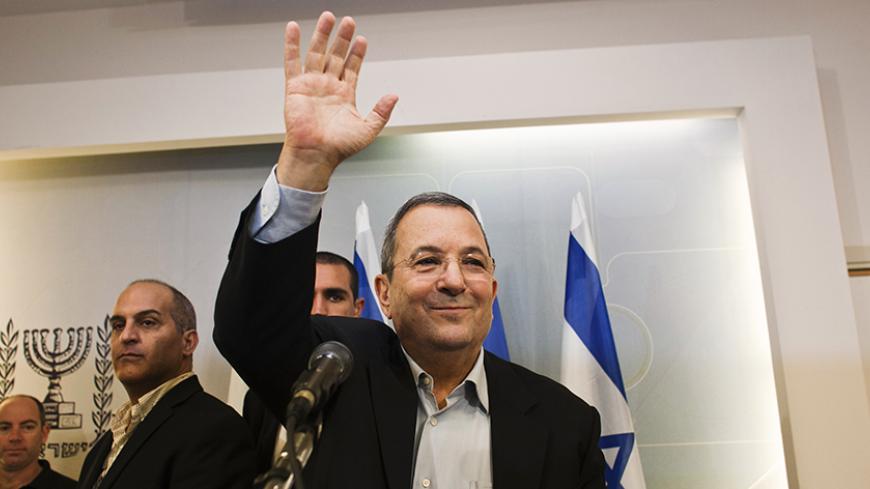 Even after retiring from politics, former Prime Minister Ehud Barak has never given up on his desire to return to the post, but from a position of the country’s savior during a calamitous period. This is the prism through which one needs to look at the myriad statements leaked over the weekend of Aug. 21, ostensibly without Barak’s knowledge. The message coming across loud and clear from Barak’s tapes, in which he speaks about past deliberations of whether to attack Iran and that have grabbed great media attention both locally and abroad, is that the former premier is the only one who can remove Prime Minister Benjamin Netanyahu from his position. Those implicit and explicit messages are present in every leaked segment.

Ilan Kfir and Danny Dor, the authors of Barak’s Hebrew-language biography “The Wars of My Life,” claim that they gave those tapes to media outlets due to a dispute with Barak, contrary to his position. But even if we take their version at face value, this is still not enough to discount the political objectives that the former chairman of the Labor Party could attain by making those assertions. Barak talked about Netanyahu’s weakness. He touched on current Energy Minister Yuval Steinitz and current Defense Minister Moshe Ya’alon, who prevented a strike in Iran on 2010. He also referred to Lt. Gen. Gabi Ashkenazi as a pusillanimous chief of staff who could not provide the appropriate operational backing for the political echelon’s decision. All those statements — either collectively or separately — are supposed at the moment of truth to serve Barak and convince the people both here and abroad of his worthiness, thereby paving the way for his return to the most senior leadership position.

Similarly to Netanyahu, Barak also has a weakness for history and towering leaders. Barak’s role model is the French leader Charles de Gaulle. It is not only de Gaulle’s courage as a soldier and as a general that captivate Barak, but also the vicissitudes in the general’s political career, one of whose formative moments was the 1947 establishment of the Rally of the French People. The party failed to pick up momentum and six years later de Gaulle retired from politics, having to watch the intensifying crisis in Algeria from the sidelines. In 1958 he was called to the Tricolor by the French people. He was elected president and has since been venerated as the nation’s savior.

Barak alluded to a similar scenario in an interview with Haaretz's Gidi Weitz in January in the run-up to the March 17 elections. When asked if he believed that after a right-wing victory, Israel’s leftist and centrist forces would call on him to return and lead the camp, he said, “I’m clear-eyed enough to know that there might be a situation, perish the thought — yes, that’s the right turn of phrase — where I would be approached and would have to consider that. Because I know under what circumstances this might happen, what I’m saying is that hopefully we won’t get to that point; hopefully something else will happen along the way.”

In that lengthy interview, Barak explained why Netanyahu was leading Israel to disaster. His statements in the interview ran in a similar vein to what has now been exposed on the tapes.

In his own eyes, Barak is a soldier and an intrepid and creative general who turned to a political career, just as de Gaulle did. Barak, too, seceded from his parent Labor Party to establish the short-lived Atzmaut faction. Having served as Netanyahu’s defense minister, he was in fact forced to retire from political life in November 2012 (on the eve of the 2013 elections) because the polls showed that his newly founded party was barely scraping the voting threshold.

Since, Barak has made sure to keep himself visible, albeit on a back burner, apparently awaiting the catastrophe that would reinstate him at the helm, thus cementing his standing in history as an illustrious leader. His occasional media interviews, much like his biography, aim to set the stage for that moment.

The issue of substance apart, another question comes up, namely that of timing. What prompted Barak, precisely at this juncture, five months after Netanyahu’s re-election to a fourth term as prime minister, to take this public step? The reason for this is that Barak sees that the vacuum created by the absence of leftist and centrist leadership is becoming an acute problem. He also feels a need to impede the positive momentum of his arch nemesis — Ashkenazi — who is considering going into politics once the Harpaz affair is laid to rest. It is no coincidence that in those tapes Ashkenazi, who retired in 2011, is portrayed as a weak and spineless chief of staff. He is depicted as someone unable to provide the political leadership with the operational tools needed to carry out its decisions.

Barak also sees the weaknesses of the leader of the Zionist Camp, Isaac Herzog, especially when it comes to security matters. He senses the feeling among centrist and leftist voters after the past elections that their camp needs someone of Barak’s caliber to rival Netanyahu. That’s the reason Barak occasionally tests the water to see if it is time for his comeback. He is doing this by enhancing his visibility in the media and also by engaging political activists from the Zionist Camp.

Barak is a great believer in the public’s short memory. Just as he was able to return to politics in 2007 in the wake of his political defeat against former Prime Minister Ariel Sharon in 2001, he believes that no one will remember the blow he suffered in 2009, when he brought his party to a historic low by getting only 13 Knesset seats. He also hopes that Israelis won’t remember his scorched-earth policy when he seceded from the Labor Party in favor of his Atzmaut faction and the criticism that was leveled against his character and political machinations.

Barak prefers to tell the public, as the tapes reveal, that while the world is promoting a compromise deal with Iran, he was in favor of striking at its nuclear facilities. He wants to convey a sense that Netanyahu, Ashkenazi, Herzog and maybe former chairwoman of the Labor Party Shelly Yachimovich are all weaklings lacking his courage.

He wants the public to see him again as the responsible adult in Israeli politics and as the right man at the right time.