Israeli Defense Minister Moshe Ya'alon has rejected the US security plan for the West Bank. 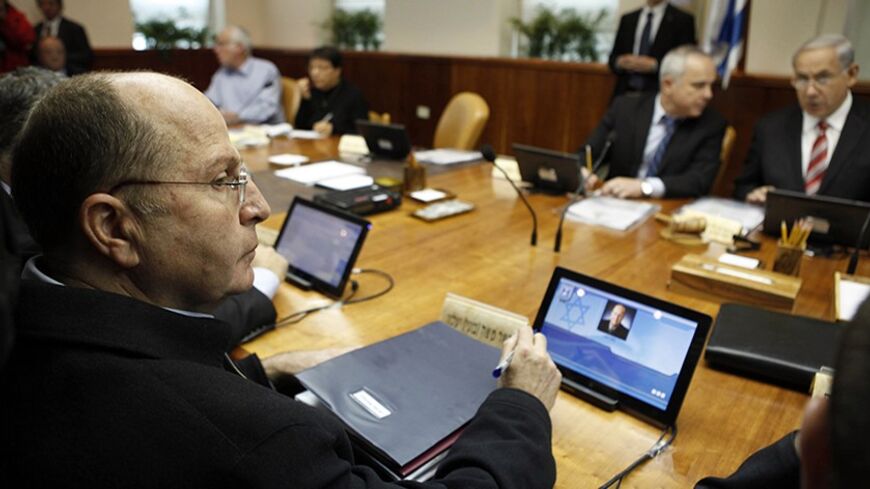 The confrontation between the US administration and Israeli Defense Minister Moshe “Bogie” Ya’alon has not ended yet. Many precedents were set in this conflict, including the announcement released by Washington on March 21, that the administration is still waiting (impatiently) for an outright apology from Ya’alon. This has yet to come.

What has received less attention is the overall conflict waged in recent months between the administration and Ya’alon on the issue of the security plan — a conflict that sometimes spills over into verbal violence. It was US Secretary of State John Kerry who revealed for the first time, in an impassioned speech he delivered to the Saban Forum in December, the existence of this plan. The plan was formed, planned and constructed under the leadership of Gen. John Allen, who spearheaded a team of 160 experts and professionals. Never, said the Americans to us Israelis when holding a briefing, had such painstaking work been invested in a security plan. In closed talks, Kerry used the example of the border between the two Koreas to demonstrate that it is possible for such a security plan to succeed in bringing down the rate of border incidents, border smuggling and border security threats to zero.

Via such a project, in which the Americans invested their hearts and souls, one could easily place a giant check mark next to Prime Minister Benjamin Netanyahu’s perpetual demand for security and move on. The security plan was meant to serve as the key that would unlock the Israeli padlock that had blocked so far continued progress toward discussions about territory, Jerusalem, etc.

And then along came Ya’alon, who poured a bucket of cold water on the plan. In talks held behind closed doors, sources in the US administration expressed great resentment over Ya’alon’s behavior. They say that the Israeli defense minister exhibited arrogance, contempt, obtuseness; he gave derogatory nicknames to the security plan and presented it as an empty plan of “gadgets” and “sensors.”

The Americans were bothered by both the style and substance of the criticism. They say that their security plan is much more than gadgets or sensors; it is a complex, painstakingly crafted plan that includes also tangible means in the field, what is called "boots on the ground" involving special forces (apparently Americans, or in cooperation with NATO) for “rapid intervention” and providing a solution to most of the Israeli demands. When Ya'alon asks, in closed talks, what he should do if it turns out that a lathe operating in Tulkarem was creating a Grad rocket that would be launched next week on the city of Kfar Saba — the Americans argue that something could be done. It is not just the sensors, idiot. But Ya’alon prefers to ignore them.

As aforesaid, a real war is being waged around this issue. The Americans contend that Ya’alon is blocking their direct line of communication with the Israeli defense system, with Israel generals and professionals in the field. According to them, the real opinions of chief of staff Maj. Gen. Benny Gantz and his high-ranking officers are not being heard, because Ya’alon is the only one expressing himself and the only one who sets the tone. According to those arguments, Ya’alon does not allow the Americans to meet with and possibly convince Israeli security agents who want to learn more about the US security plan. In American English, as in Hebrew, the American ambition is to “lobby” on behalf of their plan in Israel, but they are finding it very hard to do. Ya'alon views this as interference in Israel's internal affairs, and the Americans are furious.

Why, they ask, can Israel maintain an intimidating lobby in Washington like AIPAC — which receives absolute freedom of action to lobby on behalf of all of Israel’s important issues everywhere, from Capitol Hill to the Pentagon, the State Department and the White House — while we who invest so much energy, time and resources to try to upgrade Israel’s security cannot reach the Israeli public or its decision-makers and professionals? Where is the reciprocity here, the Americans ask. It seems to me that they pose a very good question, indeed.

It would be appropriate to develop the discussion concerning the opinions of professionals from the Israel Defense Forces (IDF) and Israel’s security apparatus regarding the US security plan. Let’s turn the clock back a few years, to the 2009-11 period, when Israel energetically prepared for a military strike in Iran, invested billions and created its magnificent “military option.” In those days, the country was filled with media leaks about the resolute objection to the assault by the heads of the Israeli security branches. From chief of staff Maj. Gen. Gabi Ashkenazi, to Shin Bet chief Yuval Diskin, Mossad chief Meir Dagan and even the head of military intelligence, Amos Yadlin (with somewhat less vehemence). At the time, a true clash of the titans of historic dimensions was waged between proponents of an attack in Iran, led by Prime Minister Netanyahu with the backing of Defense Minister Ehud Barak, and naysayers of an attack which, as aforesaid, were the heads of the security forces including the air force commander. This aftershock of this clash has not yet ended. Currently, high-level officers are being investigated under warning, including former IDF spokesman Brig. Gen. (res.) Avi Benayahu, in what is referred to as the "Harpaz affair," concerning tension between then-chief of staff Ashkenazi and then-Minister Barak that made its way into the media and led to a wave of headlines and publicity.

The current situation is the absolute opposite, the complete reversal of the situation that prevailed two years ago. It is hard to determine whether this is good or bad. On the one hand, the ruckus of two years ago was close to anarchy. It is also difficult to determine, regarding the strategic issue, who are the good guys and who are the bad guys here. On the other hand, the ominous, absolute silence we currently witness represents a blow to democracy. The Israeli public has the right to know what the chief of staff thinks and the opinions of the Shin Bet chief, the IDF Operation Branch head and other senior IDF people regarding the US security plan. True, these are members of the professional echelon; they are the soldiers who are meant to follow orders delivered by the elected members of the political echelons. Nevertheless, their opinions are a public asset. When we vote in elections, we are also supposed to take into account the security-related performance of our elected officials. One of our reference points must be their “net” professional opinions in this affair.

As of today, no one knows what the Israeli chief of staff really thinks about the US security plan. In a closed-door conversation that recently took place, the chief of staff expressed himself with great moderation when asked about the issue. He did not disqualify anything, did not call names or criticize. He said that the discussions have not yet ended — and that is true — because Ya’alon sent the Americans back to “do some homework,” in his words.

It seems to me that with regard to this affair, it is not only the Americans who must do their homework. We must do the same as well.