Former Defense Ministers Moshe Ya'alon and Ehud Barak joined a long line of defense ministers who turned their backs on Prime Minister Benjamin Netanyahu, stating that they no longer trust him. 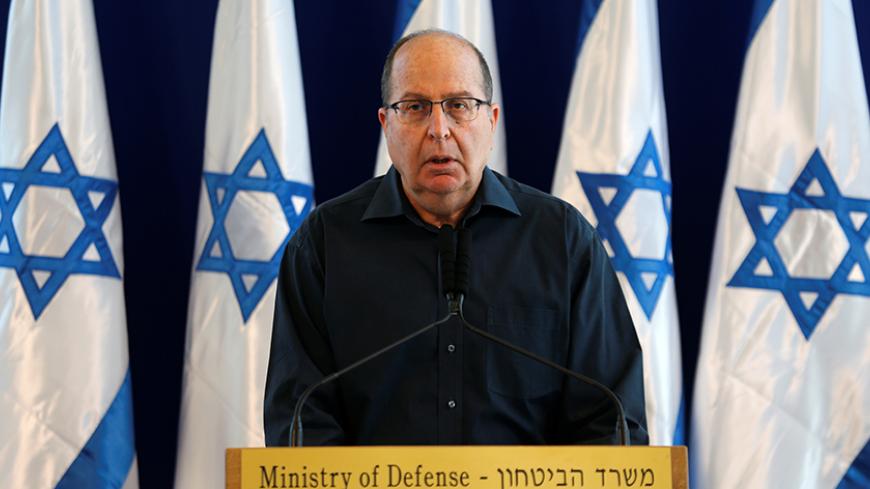 Israel's Defense Minister Moshe Ya'alon gives a statement to the press at the Kirya army base in Tel Aviv, May 20, 2016. - REUTERS/Amir Cohen

The last time Israeli Prime Minister Benjamin Netanyahu fired his defense minister, it ended with an election and a defeat at the ballot box. It happened at the beginning of 1999, when relations between Netanyahu and his popular defense minister, Yitzhak Mordechai, collapsed following the Wye Plantation Summit (1998) and the thwarting of the agreement reached in its wake. Trust between the two eroded quickly, and Netanyahu heard rumors that Mordechai was holding secret contacts with his rivals Roni Milo (Likud), Dan Meridor (Likud) and Amnon Lipkin-Shahak, retiring Israel Defense Forces (IDF) chief of staff. After Mordechai was fired, Netanyahu’s fears were realized in full: Mordechai indeed joined the three rivals, created the Center Party and although he did not win, he was considered the decisive factor in Netanyahu’s defeat in the 1999 election.

On June 16 came another round in the perpetual war of attrition between Netanyahu and the military-security elite in Israel. It started with former Defense Minister Moshe Ya'alon’s speech at the annual Herzliya Conference. Ya'alon did not spare the rod from Netanyahu, blaming him for scaring the public and an erosion of values and ethics in Israeli society. Ya'alon declared that he determined unequivocally that Israel does not face an existential threat, and that Netanyahu continues to terrify the Israeli public in order to divert the public discourse from the revelations of corruption, incitement and distress of the citizens.

After Ya'alon, another former defense minister and prime minister approached the podium: Ehud Barak. A few minutes into Barak’s speech, Netanyahu already missed Ya'alon. Barak, who was Netanyahu’s commander in the elite General Staff Reconnaissance Unit, angrily attacked Netanyahu, saying, “We are led by … a weak, flaccid and noisy prime minister and government, deceitful and extreme, that has failed again and again in ensuring our security, that is undermining the fabric of democracy in Israel, failing to maintain our relationship with the United States … missing diplomatic opportunities again and again, and paralyzed to act effectively in managing the conflict.”

Barak continued, “What really stands at the top of the Netanyahu government’s priorities is not Israel’s security or safeguarding democracy, but a creeping and cunning advancement of the agenda of 'one state from the Mediterranean to the Jordan River.'”

Barak devoted almost his entire speech to the disasters Netanyahu is wreaking upon Israel and declared that if the government does not come to its senses, “all of us … bring it down via popular protest and via the ballot box before it is too late.”

In a TV interview on Channel 2 on June 17, Barak’s tone was even harsher, as he claimed, “Netanyahu went off the rails.” He also used examples from the past, when Netanyahu, according to him, used strategies of incitement and sowed internal divisions among the public, especially preceding the assassination of Prime Minister Yitzhak Rabin in 1995.

The same day that Ya'alon and Barak spoke at the Herzliya Conference, it was publicized that the last two IDF chiefs of staff, lieutenants general in the reserves, Gabi Ashkenazi and Benny Gantz, joined a new social movement created by Rabbi Shai Piron, a former minister of education (Yesh Atid). Ashkenazi and Gantz are among Netanyahu’s sharpest critics, in particular of his policies that they believe are leading Israel to a dead end. They also especially criticize the serious crisis in the relationship between Israel and the United States, hurting the special intimacy between the two nations, which according to them Netanyahu has caused.

His entire career, Netanyahu has been a red rag for the military-security elite in Israel. It started in his first term in office (1996-99) when the popular chief of staff at the time, Lt. Gen. Lipkin-Shahak, left the army and vowed to unseat Netanyahu after he saw the prime minister’s conduct from close range. In the end, Lipkin-Shahak let another senior security figure, Netanyahu’s own defense minister, Mordechai, do the job for him.

It continued after that. One after another, nearly every chief of a security service who worked with or alongside Netanyahu expressed a lack of trust in him: late Mossad chief Meir Dagan, former Shin Bet chief Yuval Diskin, former chiefs of staff Gantz and Ashkenazi, former head of the Israeli National Security Council Uzi Arad and many others.

Something in Netanyahu’s demeanor provokes antagonism, contempt and scorn among the senior leadership of the IDF. The fact that each defense minister who worked with him in the past — except Moshe Arens, who served only for six months after Mordechai was fired — ended up with the same sad conclusion regarding Netanyahu’s character and his conduct, should serve as a warning sign for the Israeli public. In reality, things are far more complicated.

At the beginning of his career, the issue of security was Netanyahu’s Achilles’ heel. While he was a fighter in the General Staff Reconnaissance Unit, Israel’s legendary elite special forces unit, he left the IDF at the rank of first lieutenant and chose to study in the United States. The son destined for glory in the Netanyahu family was the older brother, Yoni Netanyahu, who reached the rank of lieutenant colonel and commander of the Reconnaissance Unit before he was killed in the Entebbe operation in 1976. After Yoni’s death, Netanyahu suddenly became the great white hope of the family and had to continue from the place where Yoni finished.

Netanyahu always made sure he cushioned himself with generals and security figures to forge an image of “Mr. Security.” He saw security as the be-all and end-all, and he labored diligently on his brand as “keeper of Israel’s security.” He brought former Gen. Mordechai to the Likud at the time, and would secretly meet with senior IDF officers while they were still in active duty to feel out the chances that they would join the Likud after they left the army. The problem was that almost all of these relationships imploded after tensions between Netanyahu and his officers were revealed.

The similarity between what happened to Netanyahu and Mordechai in his first term and what happened between Netanyahu and Ya'alon in his fourth term shows that this is a permanent phenomenon: In Netanyahu’s environment, there are no opportunities to spread one’s wings and fly. Over the years, Netanyahu turned himself into “Mr. Security” and no longer needs an aerial umbrella of generals surrounding him. At the same time, the situation where he finds himself almost entirely alone, facing a reinforced battery of former chiefs of staff, defense ministers, Shin Bet chiefs and generals, makes him deeply anxious, and rightly so.

For the first time in a generation, it seems there is an alternative to Netanyahu, especially in the figure of Ya'alon, who broadcasts moral standards and humility in addition to security experience and a rich military resume. Netanyahu has good reason to be worried.