Netanyahu continues to tune out voice of retired Israeli brass

A long list of retired Israeli generals is consistently calling to end the occupation, but now that he's gotten what he wanted from them, Prime Minister Benjamin Netanyahu is unmoved by their criticism. 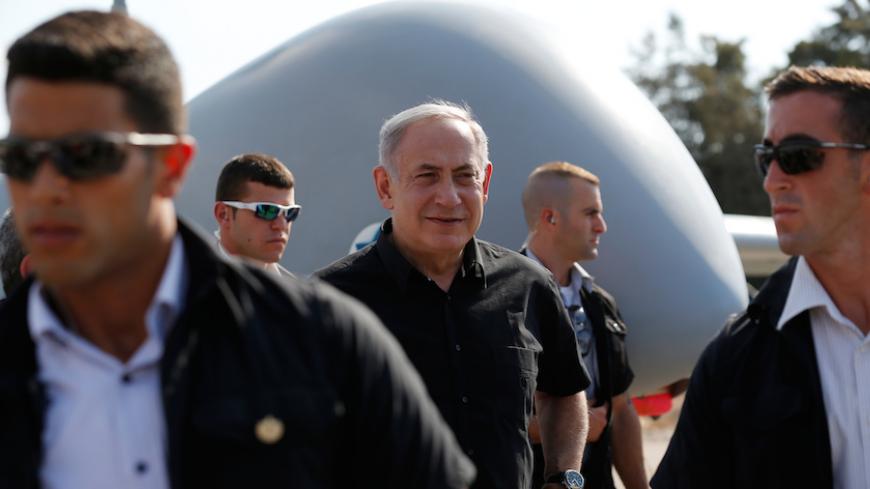 Israeli Prime Minister Benjamin Netanyahu (C) is surrounded by bodyguards during his visit to the Tel Nof air force base in southern Israel, Aug. 17, 2016. - REUTERS/Amir Cohen

Ever since he left the Mossad in January, Tamir Pardo had kept his mouth closed. He succeeded the legendary Meir Dagan and headed the Israeli espionage organization over five fateful years. In contrast to his predecessor, Pardo tried to keep the tensions and disputes between him and his commander, Prime Minister Benjamin Netanyahu, under wraps. Very few people are aware of the height of the flames that scorched the two men in clashes over Israeli policy on the Iranian nuclear efforts. On Aug. 30, in the course of an event commemorating Druze war casualties, Pardo found himself in front of the cameras and agreed to say a few words. Netanyahu was not pleased by what he heard.

When asked if Israel faces an external existential threat, Pardo joined the ranks with other heads of Israeli security branches when he said, “Today, the internal threat must worry us more than the external threat.” He argued that the most palpable danger faced by the state today is an internal rupture that could lead to civil war. Afterward he was asked about Defense Minister Avigdor Liberman's comparison between the nuclear agreement with Iran and the 1938 Munich agreement. “We must not compare apples and oranges,” Pardo stressed. “What happened at the end of the 1930s differs from what is transpiring today. History does not repeat itself, and attempts to compare [today’s events with] events that took place in the past within the parameters of a certain time period is incorrect, to put it mildly.”

Pardo saved the punch line for the end. When asked how the Israeli-Palestinian conflict ought to be resolved, Pardo said, “The prime minister said that there will be two states between the Jordan River and the sea, and he is correct.” Pardo is well aware that Netanyahu did not mean a word of his 2009 Bar-Ilan speech, making his comment a sarcastic reference to the prime minister ostensibly recognizing the two-state solution but then taking great pains to torpedo it at every possible turn.

The next day, the former head of the Israel Defense Forces’ Central Command, Maj. Gen. (Res.) Gadi Shamni, spoke at a conference at the Interdisciplinary Center in Herzliya. He talked about “the occupation,” a divisive term among the Israeli public, most of whom views the presence of Israel in Judea and Samaria as a legitimate step in the process of a nation returning to its homeland.

In his role as Central Command head, Shamni was officially responsible for the “occupation,” as sovereign of the territories and the person responsible for law and order in the regions conquered by Israel in the 1967 Six-Day War. Saying Israel had refined the occupation to an "art form," he declared, “We are the world champions of occupation. I myself was GOC Central Command, a champion of the occupation. And I’m asking, is this what we want to be?” According to Shamni, controlling the lives of millions of Palestinians costs the IDF some of its moral values and principles. He feels that the Middle East is ripe for major changes and notes that Israel is strong and confident enough to initiate them.

Contrary to his usual practice, Netanyahu did not respond directly to the two former officials, one of whom had been directly subordinate to him until about half a year ago. Netanyahu had more urgent problems this week (a coalition crisis between him and senior Likud Minister Yisrael Katz regarding desecration of the Sabbath on the Israel Railways). But Netanyahu’s silence cannot dull the fact that almost all the heads of the military branches and high-level generals who worked with him for years rose up to criticize him a short time after taking off their uniforms.

What happened to Netanyahu in his first term of office — well-publicized disputes with Chief of Staff Maj. Gen. Amnon Lipkin-Shahak and with Mossad chief Ami Ayalon — resumed when he returned to power in 2009: Mossad chief Meir Dagan claimed that Netanyahu posed a security danger to Israel and that he didn't sleep soundly with Netanyahu at the country's helm. According to Dagan, for the first time in his life he feared for the future of the State of Israel for many reasons, including the direction Netanyahu is heading.

Almost all the heads of the other military forces have joined Dagan: Chief of Staff Gabi Ashkenazi, Shin Bet head Yuval Diskin, Chief of Army Intelligence Amos Yadlin and others. Those who do not speak publicly say the same things behind closed doors. The last person to join the list is the former chief of staff, deposed Defense Minister Moshe (Bogie) Ya’alon. A political source told Al-Monitor on condition of anonymity that Ya’alon also talks privately about Netanyahu’s ''dangerous state of mind.”

Netanyahu has a powerful attraction to generals, but these are dangerous relationships that almost always end in public quarrels and slamming of doors. The prime minister has always liked surrounding himself with high-placed officers, perhaps to compensate for the fact that he himself did not have a noteworthy military career. He used them to brand himself as “Mr. Security” in the eyes of the Israeli public. Netanyahu invested tremendous effort into bringing numerous retired generals into the Likud. As of today, Netanyahu feels that he no longer needs any generals to retain this status. He easily forfeited Ya’alon for his controversial appointment of Liberman, and he really is not concerned by the accumulation of critical statements about him by security and military men.

The cooling-off period, mandated by a law passed under Netanyahu’s inspiration in the previous decade, prevents high-level military officers from joining politics immediately after they are demobilized. They must wait three years after the day they are formally discharged from service. The law protects Netanyahu from having to compete with popular generals like Ashkenazi for the premiership and gives him three years to strip them of their resplendent uniforms and erode their popularity and reputations. This system continues to allow Netanyahu to remain calm and collected.

The fact that almost all the security people who worked with Netanyahu feel that the prime minister places his personal welfare above that of the state does not trouble him in the least. He is the prime minister, and as far as he is concerned, they can talk until they're blue in the face.