Netanyahu accused of spying on own staff 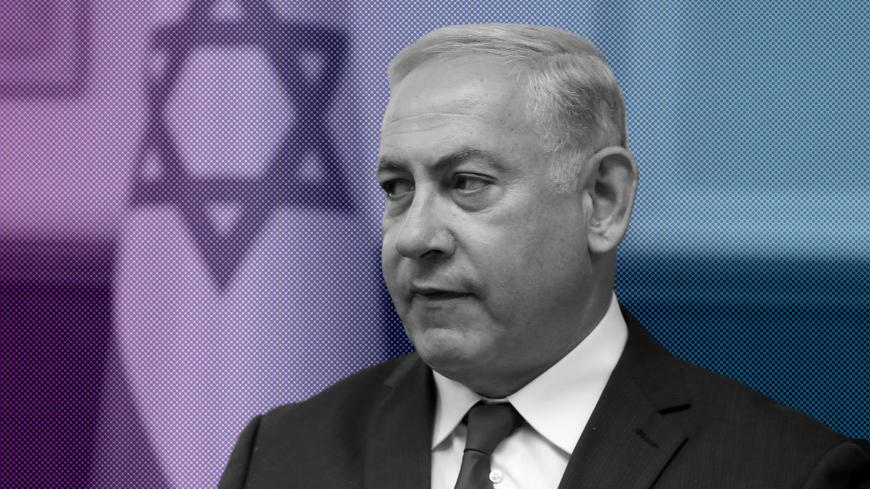 Former Mossad chief Tamir Pardo dropped a bombshell in a May 31 interview on Israeli Channel 12's program "Uvda." Pardo implied that during Israel's preparations for a very important top-secret operation, an order was given to covertly wiretap then-Chief of Staff Lt. Gen. Benny Gantz as well as Pardo himself. The report claimed that the directive was issued by Prime Minister Benjamin Netanyahu. The whole affair is telling of the credibility crisis that has prevailed between Netanyahu and his heads of the various security branches over the years.

Immediately after the interview was broadcast, Pardo found himself facing the same ordeal awaiting every security figure who dares to challenge Netanyahu. The pattern is always the same: First the interview is slandered, then the allegations are denied and finally the whistleblower receives Netanyahu’s infamous "personal attention." Netanyahu seized on something innocuous that Pardo said in jest in the course of the interview. Describing the activities of the Mossad, Pardo called it a “crime syndicate with a license.” Mossad heads have been using this term for generations, and it arguably applies to all espionage organizations throughout the world that do not necessarily follow the law in their widespread surveillance activities with the consent of their governments. Netanyahu used the mention of a “crime syndicate” to attack Pardo, declaring, “Mossad is not a crime syndicate,” as if that were what Pardo really meant.

Suspicion and hostility have reigned between Netanyahu and Israeli generals as far back as his first term of office (1996-1999), but now he has stooped to a new low. When special operations are planned, such as blowing up the Syrian nuclear reactor in Deir ez-Zor in 2007, it is acceptable to subject high-ranking persons and even elected officials to polygraph tests to deter leaks. But wiretapping the telephones of intelligence heads had never been done before. There is evidently no limit to Netanyahu’s paranoia, no red lines when it comes to the basic trust that is supposed to exist between the prime minister and the people entrusted with Israel’s security.

Netanyahu himself denied Pardo’s allegations. Under heavy pressure, former Shin Bet head Yoram Cohen said that Netanyahu had not asked him “specifically” to bug the Mossad head or the chief of staff. According to Al-Monitor's sources, this statement is true. The directive included more than 100 “parties to the secret” in the highest ranks of Israel’s security apparatus, including the Mossad head and the chief of staff. The Shin Bet refused to wiretap these high-ranking officials, so the task was imposed on the Ministry of Defense's Malmab. But since the Shin Bet did not provide Malmab with the means to do so, the wiretapping was never carried out.

Netanyahu has been this wary throughout his entire political career. When he returned to the prime minister’s office in 2009 and was concerned about leaks, he insisted on subjecting all his people to polygraph tests, including the highest placed: his Cabinet secretary, political adviser, military secretary, spokesperson, bureau chief and his office’s chief of staff. National Security Adviser Uzi Arad volunteered to be the first to be checked, but asked Netanyahu, “What about you? Shouldn’t you set a personal example and also subject yourself to the lie detector?” Netanyahu quickly brushed the proposal aside.

Netanyahu’s paranoia is absolute. He is convinced that people are snooping on him everywhere in the world, around the clock, including in his private house in Caesarea. When entertaining visitors in his private courtyard in Caesarea, he has often whispered to his guests that someone is listening. He does not feel secure in his office in Jerusalem, convinced that he is under surveillance even there. He used to convene secret meetings in the Mossad’s headquarters in the Tel Aviv area, but recently he has moved especially sensitive Cabinet meetings to a massive underground bunker in Jerusalem constructed to withstand a nuclear attack and equipped with all the necessary facilities to run a country under attack. When he is in the United States, Netanyahu is convinced that he is under surveillance in every hotel, in the White House and even Blair House. Occasionally he makes sure to pop over to the Israeli Embassy with its special sterile room, the only venue where he will consult with his senior advisers on truly sensitive issues.

Despite his misgivings, Netanyahu is supposed to trust the heads of the security branches. He is not supposed to force the General Security Services to wiretap their own telephones. Ironically, a large percentage of the most sensitive security leaks of all were caused by Netanyahu himself, whether by accident or on purpose. As opposition chairman in September 2007, Netanyahu almost spilled the beans that Israel attacked the nuclear reactor in Syria during the trickiest moments after the assault. In 1995, Netanyahu stood at the Knesset’s podium and waved a very confidential document prepared by the Israel Defense Forces.

Throughout his many years as prime minister, Netanyahu has managed to get into arguments with almost all of the security heads. Barely any of them finished their terms of office. In his first term of office, the list included Chief of Staff Amnon Lipkin-Shahak (now deceased), Shin Bet head Ami Ayalon and Mossad head Danny Yatom. Almost all of the higher-ups who have operated under him have criticized Netanyahu severely at some point, including deceased Mossad head Meir Dagan, Chief of Staff Gabi Ashkenazi and Shin Bet head Yuval Diskin. The same is true for their replacements, especially Gantz and Pardo.

Netanyahu was once leery of public confrontations with the heads of security services. One of the most basic working assumptions of Israeli politics over the years was that it was never wise to publicly enter into direct verbal clashes with senior security figures, in light of the popularity of these figures among the Israeli public. The last decade has seen a slow but relentless evolution led by Netanyahu that has changed this reality from one extreme to the other. This process brought us to the current situation in which no one dares to antagonize Netanyahu publicly. No one is immune. Netanyahu is Israel's undisputed public opinion leader and no one can politically survive a public confrontation with him. The fate of those higher-ups and officers serving under him who don’t follow the rules is an open secret: slander and public shaming. They will be pulverized by the prime minister’s media campaigns and join the long list of high-ranking officials brought down by him.