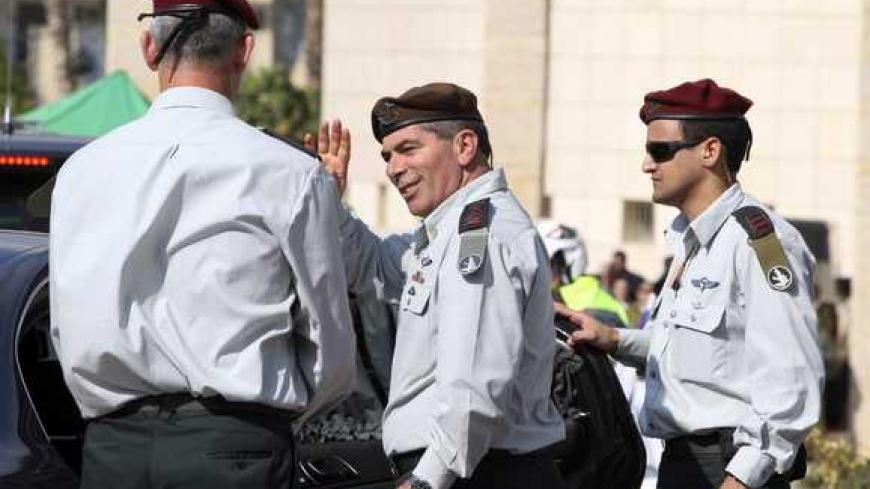 Outgoing Lieutenant-General Gabi Ashkenazi (C) waves to soldiers as he leaves after a handover ceremony in which he was replaced by the new Chief of Staff Lieutenant-General Benny Gantz (L) at the Kirya base in Tel Aviv Feb. 14, 2011. - REUTERS/Baz Ratner

"There's a stench of carrion in the room," said Israeli Chief of Staff Benny Gantz when he entered office, referring to the remains of an unprecedented battle that took place between his predecessor Gabi Ashkenazi and Israel's Defense Minister Ehud Barak. Well, the stench is still there, even after the Israeli state comptroller published an extremely detailed report on what he described as a "rift of mistrust" between the two offices known as the "Harpaz Affair." There is a direct link between the Barak-Ashkenazi clash and the harsh and unusual distrust expressed by the former chief of Shin Bet, Yuval Diskin, toward Barak and Prime Minister Benjamin Netanyahu. Israel's former and current defense chiefs have very little trust in their political leadership.

The body of the Harpaz report relies on a treasure the State Comptroller's staff discovered: recordings of every single phone call made to and from the chief of staff's office. Such recordings were not found in Barak's office. The report describes at length the deteriorating relationship between Barak and Ashkenazi, in which a crooked officer, Boaz Harpaz, fed Ashkenazi and his aid with disinformation. Ashkenazi received a forged document from Harpaz, detailing Barak's alleged campaign against him and believed it to be true. However, the report fails to explain why and what exactly caused the two men, who for the first two years worked together in a reasonable harmony, to develop such mutual animosity, to the point where they could hardly function together.

The report focuses entirely on Harpaz' activity, but Harpaz was just a symptom, not the problem. Asked about the conduct of Ashkenazi's aid, the late chief of staff Amnon Lipkin-Shahak testified: "These are actions which are not supposed to be taken in a normal situation. But this wasn't a normal situation. It was madness." What was it that allowed such insanity to take over two of Israel's most respected generals? The comptroller preferred to limit his scope to the actual feud and not to seek its roots.

Several months after Barak entered the Ministry of Defense in 2007, Israel had reportedly destroyed a nuclear reactor built secretly in eastern Syria. Reports published outside Israel described how Barak tried to delay the Israeli strike despite the fact that the reactor was about to start operating. Cynics suggested Barak was trying to synchronize the strike with the expected resignation of then-prime minister Ehud Olmert, due to possible criticism from the committee analyzing the Second Lebanon War. It was in those discussions, prior to the strike, when Ashkenazi took an unusual, if not an insolent step: He refused to follow the common practice under which the military presents its operational recommendations to the defense minister, before presenting them to the cabinet. Fearing that Barak might force the army to change their recommendations, Ashkenazi insisted that Barak hear his recommendations together with the rest of the cabinet members.

It was then that Israel's defense chiefs — Askenazi, Diskin and Mossad head Meir Dagan — began questioning the motivations and judgment of Barak. Two years later, when Netanyahu became prime minister and Barak turned into the leading advocate for an Israeli strike against Iran, their suspicions grew. On several occasions, Netanyahu and Barak asked to put the IDF on high preparedness for a strike and the defense chiefs joined forces and blocked the move, claiming it amounted to a declaration of war and that only the whole government has the authority to do that.

Diskin, in his unprecedented interview with Yediot Aharonot, described a discussion on a possible Iran strike held in Mossad headquarters, where Barak, with a glass of whiskey, was smoking cigars with Netanyahu. It wasn't the smoke, nor the alcohol, that made Diskin so uncharacteristically expose details from an intimate discussion. There were other Israeli leaders who had their vices, but none of their defense chiefs would ever dare to breach confidence and publically disclose details from discrete meetings. It was an expression of complete mistrust in Netanyahu and Barak's leadership by Diskin. Similar distrust was expressed by Dagan in earlier interviews and by Ashkenazi in private meetings. Never before had the defense chiefs of Israel questioned the capabilities of the elected leadership so explicitly.

Those doubts did not dissipate when the "iron triangle" of Ashkenazi-Diskin-Dagan left office. Their successors, although more polite and understated, have feared several times during the last year that Netanyahu and Barak might lead the country into an unnecessary war with Iran.

"Without a strong defense minister and chief of staff, it will be hard for Netanyahu to make tough decisions," said Diskin. Barak has declared he's not running for office again, but did not reject the idea that, if asked, of serving another term as defense minister under Netanyahu.