Israel in search of a leader

Israeli Defense Minister Moshe "Bogie" Ya’alon tries, and fails, to pick up the mantle of Sharon. 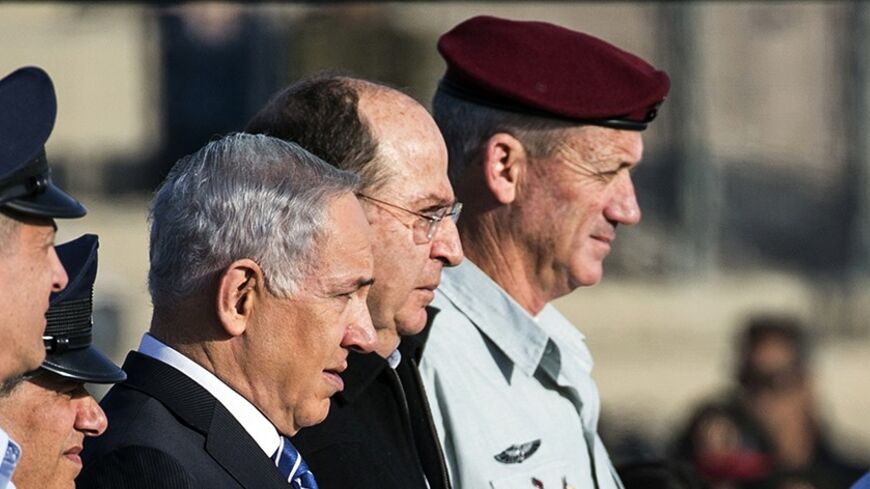 A day after Israel’s former Prime Minister Ariel Sharon was laid to rest, on Jan. 13 Israel’s Defense Minister Moshe "Bogie" Ya’alon was quoted to have leveled scathing, if not to say crude, criticism at US Secretary of State John Kerry.

“Kerry is messianic,” Ya’alon said in closed conversations (according to Israeli daily Yedioth Ahronoth’s headline on Jan. 14). “He is obsessive. Let him take the Nobel Prize and leave us be.”

It may have been homage to Sharon, who served as Israel’s defense minister exactly 30 years ago and specialized in stoking precisely such fires. It is also possible that Ya’alon, who says these things incessantly in closed discussions yet makes sure they don’t leak, may have slipped up. Well, eventually they did leak.

I would venture to say that Kerry probably did not fall off his chair upon getting this report from US ambassador to Israel, Dan Shapiro. He has heard scathing criticism about the “security plan” which the United States drew up in Israel’s interest. Although he has not heard direct personal insults from the Israeli minister, the unfavorable innuendos are nevertheless out there. Ya’alon wants to be Sharon. The problem, however, is that he wants to be the former Sharon rather than the latter-day one. He wants to be Sharon — the man of war, the intransigent and unstoppable politician.

Dozens of world leaders and politicians, chief among them US Vice President Joe Biden, attended Sharon’s state funeral on Jan. 13. Eight years after his severe stroke and 10 days after suffering renal failure, Sharon finally succumbed. Israeli officials were convinced that international attendance at the funeral would be limited given the long time since Sharon stepped down from the political and diplomatic map. They were proven wrong.

Many delegations attended the funeral, including dozens of foreign dignitaries who listened to impressive eulogies by Biden, former British Prime Minister Tony Blair as well as to eulogies by Israel’s President Shimon Peres, Prime Minister Benjamin Netanyahu, Knesset speaker Yuli Edelstein and chief of staff Lt. Gen. Benny Gantz. Later that day, US Secretary of Defense Chuck Hagel called his Israeli counterpart, Ya’alon, to convey his special condolences. The former Sharon would not have received such honor; the latter one did.

Sharon’s passing swept the international media and not just in the Arab world. Television networks around the Middle East were aflutter, addressing in their headline news the demise of Gen. Sharon, who for dozens of years symbolized Israel’s brute force and power. Yet, the passing of the Israeli military and political leader made headlines not only across the Middle East but also around the world, and in almost every language.

What did Sharon have that drew so much international attention? To my mind, the reason is not just his personality. Not only in Israel but around the world, too, people realize that Sharon’s passing heralds the end of a generation in Israel. The world also recognizes the severe leadership crisis of the Jewish state. Looking to the left and to the right, it sees no new Sharon in the offing. It seems to me that not only Israelis, but others around the world, too, miss him or someone of his caliber.

Israel’s incumbent prime minister is Netanyahu. In the last elections, Bibi (Netanyahu) took a beating when his Likud Party garnered just 20 seats of the 120-seat Knesset. Had it not been for the last-minute merger with Yisrael Beitenu — the party of Foreign Minister Avigdor Liberman, which secured 11 more seats — Netanyahu would have lost the elections despite being a sitting prime minister and despite that he faced no other contender of a high caliber.

Paradoxically, even though he was personally unpopular and although his results in the last elections were disappointing, when Israelis are asked who from among the relevant contenders is best suited to be prime minister, Netanyahu gets the most votes, around 40%. Those lagging behind — Chairman of the Opposition and Knesset member Isaac Herzog, Avigdor Liberman, Finance Minister Yair Lapid and Justice Minister Tzipi Livni — are only in the single digits.

This has been conducive to a rare political situation. The Israeli public has no appreciation or regard for Netanyahu. They don’t like him, yet are aware of the reality that there isn’t anybody else. Bibi remains alone in Israel’s political ring, and this has been the case for quite some time. And in light of the current state of affairs, it may take quite a while for the situation to change.

Consider the following: Although Israel’s prime minister is a lame duck, there’s nobody really threatening his position. His approval ratings are low as is trust in him. Notwithstanding, there is no other contender poised to replace him.

How did Israel end up in this serious and unprecedented leadership crisis? The answer to this question is complex. During the early decades of its existence, Israel enjoyed the generation of its founding fathers, which is sometimes referred to as “the generation of giants.” It consisted of “the” founding father — the first prime minister David Ben Gurion, as well as Prime Ministers Moshe Sharet, Levi Eshkol, Golda Meir, Moshe Dayan (who served as chief of staff and defense minister), Shimon Peres and, of course, Yitzhak Rabin. At any given time, there were at least four or five leaders who coveted the premiership and were considered suitable for the job and came close to landing it.

In 1977, when the government switched for the first time from left-wing to right-wing, this reality continued. The Likud Party presented Menachem Begin, who was later followed by the “Likud princes” — people like Sharon, David Levy, Roni Milo, Dan Meridor and former Prime Minister Yitzhak Shamir. The Labor Party continued displaying the Rabin-Peres tango, and this group was later joined by Ehud Barak, and at the last minute also by Ehud Olmert, who somehow managed to jostle his way in.

The position had always been up for grabs. There were many contenders, and the top of the pyramid felt tight. While serving as prime minister, Sharon would always describe the hardships of the position. He talked about how tormenting the decisions were and how onerous the responsibility was. And yet, he would add, I see a relatively long line outside of people who want to succeed me.

Sharon’s passing symbolizes the final disappearance of the generation of the founding fathers. The last man standing in this group is Peres, who is over 90 and is expected to end his term as president of the state in five months’ time.

Peres does not quit. People like him never do. But he is unlikely to return to political life. Netanyahu remains the prime minister and when you look around, it’s hard to single out anyone who could threaten him in the coming elections. Defense Minister Ya’alon is not ready for this yet, and neither is Minister of the Interior Gideon Sa’ar, the most prominent Likud Party politician. Yair Lapid has lost momentum, while Isaac Herzog, the newly appointed chairman of the Labor Party, has yet to gather such momentum. Tzipi Livni has been pushed to the sidelines whereas Minister of Economy and Trade and Chairman of HaBayit HaYehudi Party Naftali Bennett is too extreme. Given Israel’s political map at this time, there isn’t anyone who emerges as a potential prime minister. Everyone is convinced that Netanyahu is past his prime and that it’s hard to believe that he would have another term in office. Stuck and fossilized, he has “lost the touch” (provided he ever had this “touch”). Yet, nobody can single out anyone to come in his stead as prime minister. There is no one, however high and low you search.

In addition to the disappearance of the generation of the founding fathers, several other things have taken place here; things that were more planned. Inspired by Netanyahu, Israel’s political establishment had taken steps to block the introduction of new forces.

The most dramatic action was the adoption a few years ago of the “cooling-off law.” In accordance with this law, senior military and police officers as well as senior security officials must undergo a three-year cooling-off period before going into politics. In addition to this three-year period, officers receive another “adjustment” year (during which they remain in uniform and on the payroll with benefits). So what we end up with is a chief of staff, a general or a Shin Bet or Mossad director who are forced to remain out of the political establishment for a four-year period after retiring from their position. In Israeli politics, four years are an eternity. The breakneck speed of events in Israel makes the public forget what happened just two months earlier. Thus, anyone who served as chief of staff four or five years earlier is considered to be distant history.

Until this law passed, the defense establishment was Israel’s melting pot for grooming leaders. When a country is surrounded by so many enemies and its existence is imperiled around the clock, it is only natural for a military resume to be one of the prerequisites for political success. For years, Israel’s leadership renewed its ranks and human resources through its military: Moshe Dayan, Ariel Sharon, Ehud Barak, Yitzhak Rabin, Ya’alon. This is just a partial list of senior Israeli politicians who hailed from the Israel Defense Forces (IDF). This stream of people was stopped almost overnight.

The law was passed by the political establishment to prevent then-chief of staff Dan Halutz from going into politics. In the interim, Halutz became irrelevant in the wake of the Second Lebanon War. Then the law was perceived to torpedo then-chief of staff Gabi Ashkenazi from going into politics. However, Ashkenazi also took a serious blow in the Harpaz Affair that keeps rocking the IDF to this day. In addition to these two, many gifted senior officials from the military, Shin Bet, the Mossad (Meir Dagan, for example) and police are unable to go into politics. Everyone is bogged down by the “cooling-off” period. They lose the momentum and the wind in their sails. By the time this cooling-off period is finished, they are finished.

In addition to this defense wall, Israeli politicians who set out against the traditional power centers (the judiciary, for example) were also “targeted.” The chief victims in this case were Olmert and Haim Ramon.

The upshot of what was described in this article is both serious and disconcerting. Toward its 66th anniversary of independence, Israel is losing its bearings. It is required to make fateful decisions, but there is nobody to make them. It needs courageous leadership, but it has no leader. From the outside, Israel appears — mainly by comparison to its neighbors — as an island of stability and security. From the inside, however, Israel is a country that has lost its bearings and is in search of a leader.