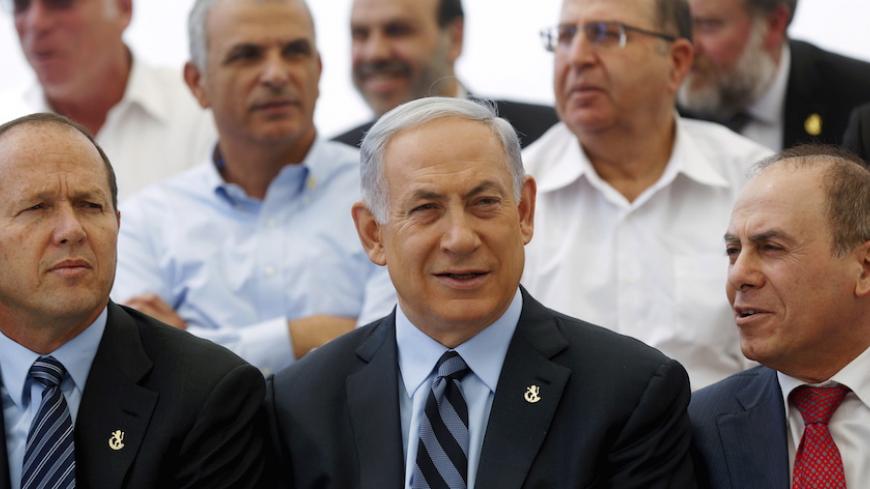 Israeli Prime Minister Benjamin Netanyahu (C) poses with his new government and Jerusalem Mayor Nir Barkat (L) as he holds a meeting of his new Cabinet, in honor of Jerusalem Day, Jerusalem, May 19, 2015. - REUTERS/Atef Safadi

One of the great mysteries of Israeli politics is how the country reached the point at which there is no obvious alternative to Prime Minister Benjamin Netanyahu. How is it that none of the people running against him are deemed capable of taking on one of the most sensitive, precarious jobs in the world, prime minister of Israel?

Israel’s political history is marked by decades of rivalry between leaders, claimants to the throne, political “princes” and legendary figures competing for the top leadership position, ever since the country’s founder David Ben-Gurion retired from office. The Labor Party produced Moshe Sharett, Levi Eshkol, Golda Meir, Moshe Dayan, Yigal Allon, Yitzhak Rabin, Shimon Peres, Haim Ramon, Yossi Beilin and many others. The Likud offered Menachem Begin, followed by Yitzhak Shamir, David Levy, Ariel Sharon, Moshe Arens and many more. Netanyahu became a rising star in Israeli politics in 1988, when he returned home from his post as ambassador to the United Nations. Eight years later, he was elected prime minister. Ever since, Israeli politics has been thrashed. What was once an oasis brimming with outstanding individuals and talent has become an arid wasteland.

There are many reasons for this, all of which have been covered in countless articles. Chief among these is the anti-democratic “cooling off law” sponsored by Minister Yuval Steinitz on behalf of Netanyahu. The law forces military officers and other senior figures from the defense establishment to wait a four-year cooling-off period between leaving their posts and entering politics. What this actually does is prevent them from taking advantage of their popularity and their most productive years (they tend to retire from the military at 55) when they enter the political arena. The Israel Defense Forces (IDF), the Mossad, Shin Bet and the defense establishment have long been Israel’s largest and most prominent leadership resource, producing a steady stream of popular and experienced generals with name recognition and leadership skills after each cycle. With the cooling-off law, this production line has been blocked.

Then there is Netanyahu himself. He has ensconced himself within a sophisticated system designed to wear down potential rivals. It serves as a firewall of sorts, which recognizes every potential threat at a very early stage and takes action to neutralize it. The best example is what happened to former Chief of Staff Gabi Ashkenazi. Once regarded as the “great white hope” of Israel’s center-left camp, he has been forced to spend the last five years defending his reputation from a concerted legal and media assault. Though the case against Ashkenazi will soon be closed, he will not get those lost years back.

The third and final reason is that Netanyahu does not allow any of his political rivals to grow, mature and emerge as an alternative. Anyone in the Likud who shows nascent popularity or leadership potential is pushed out of the party or even expelled outright. That is what happened to Finance Minister Moshe Kahlon and former Minister Gideon Saar, both of whom left. It is what almost happened to Gilad Erdan too, this time. It is why Netanyahu dismantled his last government once he noticed Yesh Atid head Yair Lapid ascending. Netanyahu preferred to hold new elections rather than allow Lapid to reap the benefits of his economic policies.

As things now stand, no opponent faced by Netanyahu since his return to the prime minister’s office in 2009 could be considered a heavyweight. None was regarded by the public as potential prime minister material. That was the case with Tzipi Livni in 2009, Lapid in 2013 and Zionist Camp leader Isaac Herzog in 2015. Another potentially bitter rival, Avigdor Liberman, lost his chance on the eve of the last election when a police investigation against senior members of his party became public knowledge, coinciding with the launch of his campaign. Liberman now accuses Netanyahu of being behind a conspiracy against him. He points to the close relationship between Netanyahu and the country’s top law enforcement officials, including Attorney General Yehuda Weinstein, who was once the Netanyahu family’s attorney, and Chief of Police Yohanan Danino, whose tenure was extended by another year by the prime minister directly.

Two intriguing potential rivals to Netanyahu have popped up over the past two weeks: Jerusalem Mayor Nir Barkat and Tel Aviv-Jaffa Mayor ​Ron Huldai. Both began their careers in municipal politics, both are mayors of major Israeli cities, both are considered top-notch administrators and both are very popular among their constituents. Both of them are eying the prime minister’s office, and both will soon face a campaign to grind them down.

Jerusalem and Tel Aviv are Israel’s two capitals of a sort. Jerusalem is Israel’s official, religious and national capital, a symbol of the country’s ethos. Tel Aviv is the capital of Israeli secularism, a colorful liberal, cosmopolitan city, considered a kind of separate “bubble” and an independent country within Israel.

Barkat, now 55, has been serving as mayor of Jerusalem since 2008. Huldai, 71, has been mayor of Tel Aviv since 1998. Both men have high popularity ratings in their respective cities. Barkat, a major in the Paratroopers Brigade, had a successful career in high-tech and is considered Israel’s wealthiest mayor, with an estimated personal fortune of 500 million shekels (some $130 million). Although he is secular, he is accepted by all sectors of Jerusalem’s population, including the most extreme ultra-Orthodox and the religious Zionists. Barkat is an effective technocrat, a creative and resolute individual who succeeded in halting the negative tide of immigration from which Jerusalem had been suffering, and in turning around the way the city is socially and culturally perceived.

Huldai is thought of as the “president of the Tel Aviv bubble.” A decorated fighter pilot who left the IDF with the rank of brigadier general, his views are aligned with those of the Zionist Camp. He toyed with the idea of diving into the murky waters of Israeli politics on more than one occasion, and eventually did so.

In conversations over the past few weeks, Huldai admits that he was on the verge of competing against Herzog before the last elections, but that he changed his mind at the very last minute. People close to him say that because Herzog failed to defeat Netanyahu despite favorable conditions at the onset, Huldai is seriously considering challenging him and winning the Zionist Camp’s leadership. Given his advanced age, Huldai knows that this will be his last chance at such a race. He has yet to make the final decision and is currently examining the field and assessing his chances.

A documentary about Herzog that aired recently on Channel 10 delivered a resounding blow to the Zionist Camp leader's image and set off a wave of talk within the party about the need to replace him with a stronger candidate who brings political “killer instincts” and a background in security to the table. A person who could pose a challenge to Netanyahu’s string of victories. The maker of the film, journalist Anat Goren, gained access to the innermost sanctums of the Herzog campaign, and what she showed was excruciating. Huldai is considering using this opportunity, but even if he does decide to enter the fray, it is not at all certain that he will succeed.

Barkat’s situation is more complicated. He was a top ally of the prime minister for the past few years, offering Netanyahu his support and working closely with him. Just before the last March 17 elections, Barkat and Netanyahu reached an explicit agreement that the position of minister of Jerusalem affairs would be eliminated and its particular responsibilities restored to the prime minister’s office. Barkat had succeeded in convincing Netanyahu that there was no need for such a minister. It was nothing more than a bureaucratic impediment that hindered the city’s development. It was a redundant power base for bored politicians, of no benefit to the public. Barkat was absolutely right, and Netanyahu conceded. He even announced on the eve of the elections that once elected, he would keep the responsibilities of that ministry for himself and work with Barkat directly.

This week (May 25), however, along with the swearing-in of Gilad Erdan as minister (and in relation to the portfolios accorded to him), Netanyahu granted the position to a member of his inner circle, former Chairman of the Coalition Zeev Elkin. Barkat was livid. A 4½-hour meeting was held at the prime minister’s office during the night between May 25 and May 26. In addition to Netanyahu, the meeting was attended by Barkat, Elkin and Netanyahu adviser David Shimron, an attorney. Barkat's tone at the meeting was shrill. Barkat accused Elkin of “extorting” the prime minister and stormed out, slamming the door behind him. As of now, the parties aren’t talking. Barkat is furious at Netanyahu for breaking a promise that he made publicly, and for being forced yet again to chase after a redundant minister, who has no real role, but who will nonetheless attempt to delay any development projects for the sole sake of gaining political influence and squeezing out new jobs for his supporters.

This potential political rivalry is now simmering behind the scenes. Recently, Netanyahu and Barkat arrived together to a large event held at the Jerusalem Merkaz HaRav rabbinical college, one of the most important symbols of the religious Zionist movement. Netanyahu received a loud round of applause when he entered, but it was nothing compared with the thunderous cheers that Barkat received. People attending the event described Netanyahu’s grim expression upon getting his first glimpse of the young mayor’s rising popularity, broadcast live from the field. Barkat’s popularity wasn’t just rising. It was rising in Netanyahu’s own backyard, in one of his most important power bases.

At the same time, Netanyahu started hearing rumors about how political activists and others on the right are already raising Barkat’s name as a potential heir once he retires from politics. But Netanyahu doesn’t want to retire and detests such talk. In fact, he has made a point of clipping those potential heirs’ wings and casting them into political exile. There is no reason to assume he would act any differently with Barkat. According to senior political sources in Jerusalem speaking on condition of anonymity, that is why Netanyahu turned on Barkat, broke his promise and decided to break apart the intimate axis of cooperation between them.

Now everybody is waiting to see how Barkat responds. He doesn’t have too many options. In his day, Sharon made a point of being Netanyahu’s right hand man, playing the role of his closest, most loyal confidant to position himself as Netanyahu’s heir after Netanyahu's defeat in 1999. Barkat will have a hard time filling that same role now. On the other hand, Netanyahu is here for the long haul. He has no intention of going anywhere. Barkat has no choice but to come to terms with this new reality, wipe the spit off his face and move ahead.