Israeli Prime Minister Benjamin Netanyahu is blocking attempts to shorten the three-year wait required of former defense officials before entering politics so that none of them will threaten his rule. 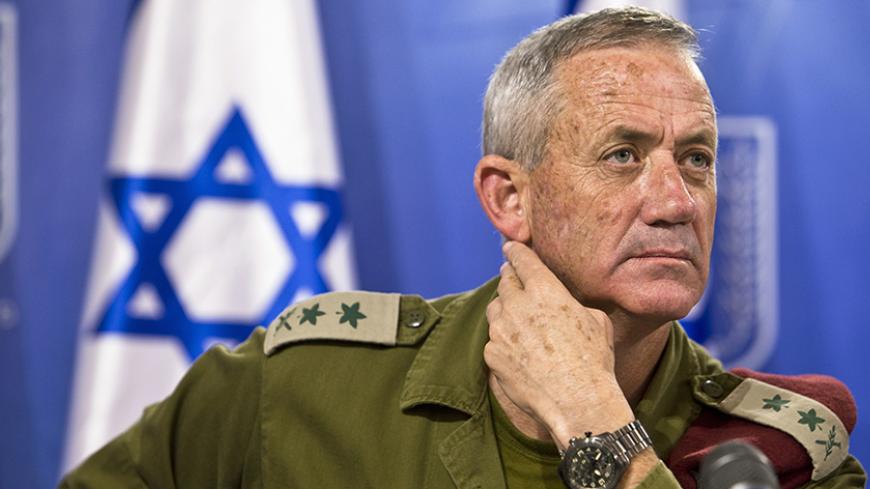 This week, the Ministerial Committee for Legislation considered Knesset member Yaakov Peri’s proposal to reduce the period before people leaving the security forces (the Israel Defense Forces, police, Shin Bet and Mossad) can enter politics from three years to one. The "cooling-off" law stipulates that retired security establishment members must wait three years from the day they leave their posts before they are permitted to run in any kind of political elections or participate in any formal political activity. The declared purpose of the law is to make sure that there is no conflict of interest between an individual's military activity and future political aspirations.

Before the committee held its vote, Peri, a former director of the Shin Bet, met with most of the committee’s members, including its chairwoman, Justice Minister Ayelet Shaked. He left these talks with the impression that they agreed that the law kept Israeli public figures of the highest quality from entering politics. Peri stressed to the committee members how important it was for their vote to be based on the issue at hand, rather than on narrow political motives.

His conversation with Shaked was especially positive, at least as far as Peri was concerned. She listened to what he had to say and did not reject the issue out of hand. At the moment of truth, however, the proposal did not pass. Likud ministers form a majority on the committee, and they voted against the proposal en masse.

Of course, this was not the first time that the committee has rejected a law for reasons that have nothing to do with the law itself. In this case, they opposed the law because it runs counter to their chief's mindset. In other words, Prime Minister Benjamin Netanyahu objects to any changes to the law. As long as it is up to him, Netanyahu will not allow for any reduction of the lengthy cooling-off period for senior defense officials, because the current law fits his approach to realpolitik like a glove. It does everything it can to prevent new political rivals, who might threaten Netanyahu’s standing, from entering the political arena.

These days, the No. 1 suspect of aspiring to enter the political ring is former Chief of Staff Benny Gantz. Like other former chiefs of staff in Israel, he is a popular figure with considerable public support. Gantz is also considered a person with values, a particularly suitable candidate.

Gantz has yet to say anything concrete about potential plans to get into politics. Nevertheless, in the leadership vacuum that has overcome Israel since the beginning of the Netanyahu era, any popular figure with public support is perceived by the prime minister as a clear and present danger.

In a demonstrative act of defiance, Peri decided to put his proposed legislation up for a vote in the Knesset this week, knowing full well that it would suffer the same fate it did in committee: It would be buried in feeble responses.

In a conversation with Al-Monitor, Peri explained that it was important to put this law up for a vote to start a public discussion about a bad law aimed solely at preventing a specific set of people from entering politics. As he said, “It is obvious that what underlies this law are narrow political motives, intended to exclude senior defense officials from politics. Rather than encouraging these generals, we are putting up barricades to keep them out, and thereby assaulting democracy itself. A three-year cooling-off period is disproportional."

The fact is that the current cooling-off legislation was born in sin. Until 2007, the law mandated a six-month cooling-off period before senior defense officials could dive into politics. For decades, this meant that capable chiefs of staff and other top generals had been able to integrate into the political arena upon completing their decades of service. Some of them, including Ehud Barak, Ariel Sharon and Yitzhak Rabin, went on to serve as prime minister. Others, like Moshe Dayan, Ezer Weizman, Amnon Lipkin Shahak, Yitzhak Mordechai and Shaul Mofaz, also found a place in the highest echelons of Israeli politics, most of them in the Labor Party.

Steinitz poured considerable effort into advancing the law, and received Netanyahu’s backing. By the time the existing law was amended in late 2007, Halutz was already battered and bruised because of the 2006 war with Lebanon. He no longer had a chance at running for the position of prime minister. Netanyahu was then chairman of the opposition and preparing to retake the prime minister’s office. He considered the amended law an effective way of obstructing his political nemeses whenever they tried to block his own path to power.

As soon as the amended law was approved, Steinitz announced that democracy was the big winner. It is actually not at all clear how the amended law helped to strengthen democracy, since it infringed on the basic right of a certain set of people to run for a Knesset seat for an extended period. What is clear, however, is that Steinitz’ law effectively succeeded in blocking former Chief of Staff Gabi Ashkenazi from entering politics. As one of the country’s most popular chiefs of staff, he was once considered a formidable threat to Netanyahu and Barak. The same is true of former Mossad director Meir Dagan and former Shin Bet director Yuval Diskin, who were prevented from running in the 2013 elections.

With so many people in Israel complaining about a leadership crisis, an excessive cooling-off law created for specific political ends is the very last thing that this country needs. Nevertheless, over the last few years, any attempt to amend it has been blocked by the high-handed tactics of Netanyahu and his circle.

In 2010, for example, there was another initiative to reduce the cooling-off period in an apparent attempt to help Ashkenazi enter politics. Knesset members Eitan Cabel (Labor) and Yoel Hasson (Kadima) proposed legislation to reduce the period to a year and a half, but the Likud and Kadima parties blocked it. They were concerned that Ashkenazi, who was riding a wave of enormous public support, would end up stealing seats from them. In the meantime, Ashkenazi got caught up in problems of his own, fighting for his public image in the Harpaz Affair.

Another proposal to amend the law was submitted in June by Knesset member Maj. Gen. (Res.) Eyal Ben-Reuven of the Zionist Camp. Ben-Reuven also proposed reducing the cooling-off period to a year and a half, saying that the current period is unreasonable because it prevents top-quality public servants from integrating into politics. He also pointed out that the law as it currently stands discriminates against senior officials from the defense establishment, who are denied entry into politics for three years, while the cooling-off period for other senior officials and bureaucrats is only 100 days.

“It’s absurd. People have been complaining for years that no new generation of leaders is emerging. But where are they supposed to come from if the state is doing everything it can to neutralize its security experts, the very group that was a pillar of Israeli politics for years?” Knesset member Omer Bar Lev, himself a colonel in the reserves, asked Al-Monitor.

Bar Lev is right. Nevertheless, the chances of this law being changed at this time tend toward zero. As long as it is left up to the prime minister, good people who could add depth and experience to Israeli politics will be kept waiting on the sidelines until their expiration date. And that’s just the way Netanyahu likes it.