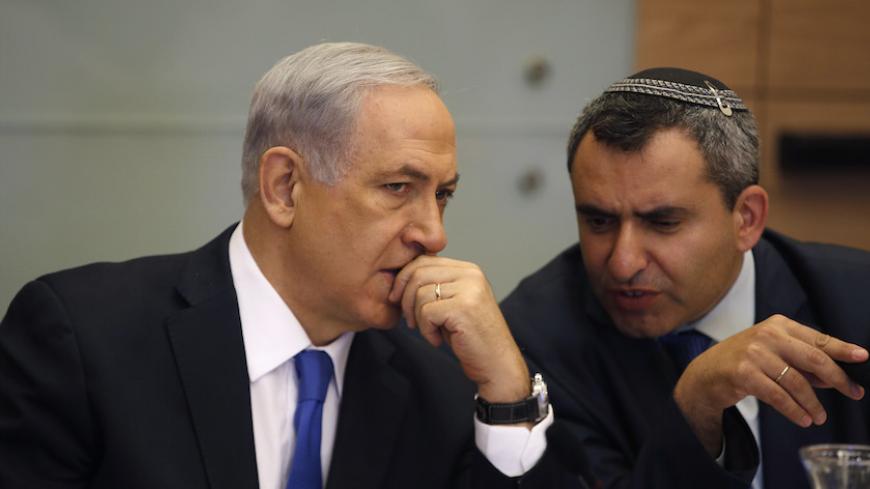 Minister of Immigration and Absorption Zeev Elkin won a personal political victory May 26 when he came out on top in his recent bout of arm wrestling with Prime Minister Benjamin Netanyahu. The grand prize that he won was the Ministry of Jerusalem Affairs.

Earlier, after serving for 10 days as minister for strategic affairs, the ministry was taken away from him and given to Gilad Erdan when he rejoined the government. Elkin responded by sending a series of implicit threats to Netanyahu. He boycotted the Likud faction meeting May 25 and voted against the government’s position in the Ministerial Committee on Legislation. What Elkin really wanted was compensation, in this case the Ministry of Jerusalem Affairs. The problem was that Netanyahu had made a public promise to Jerusalem Mayor Nir Barkat before the election that he would not appoint a new minister to this position. Now he found himself caught in a trap. Barkat tried to fight back, but he was contending against a Likud minister who is part of a very fragile coalition of just 61 members. In other words, he didn’t have a chance.

The unusually aggressive message that Barkat released to the media the morning of May 26 provides a very accurate summary of what happened. “The decision to re-establish the Ministry of Jerusalem Affairs was made in direct opposition to my own opinion on the matter and contradicts both the prime minister’s commitment and the government’s decision, made on Jerusalem Day,” he wrote. “Jerusalem is not a consolation prize for anyone. I am saddened that narrow political considerations will result in the waste of public funds and superfluous bureaucracy, which will impede cooperation between the government and the municipality in their efforts to develop and promote Jerusalem.”

Furthermore, in discussions he held with Netanyahu before the final decision was made, Barkat made it clear to the prime minister that he does not plan to work with Elkin, and that he does not consider him to hold authority over any program or actions whatsoever that he intends to advance in the city. Barkat went on to tell Netanyahu that as far as he is concerned, when it comes to matters concerning Jerusalem, the prime minister is the only position that he recognizes.

In other words, Barkat, considered an outstanding mayor and highly regarded by the people of his city, considers Elkin persona non grata in Jerusalem, trying to become an influential element in matters pertaining to the city. People close to Barkat were even more outspoken in private conversations. Yedioth Ahronoth even quoted one of them as saying, “In his capacity as minister of Jerusalem affairs, Elkin will not be setting foot in City Hall. On the other hand, he will be welcome there as minister of immigration and absorption.”

Barkat is right that the ministry is redundant, and that it would hamper his own routine dealings with the other ministries. Barkat is known to have close personal ties not only with Netanyahu but also with other ministers, including Finance Minister Moshe Kahlon, whose brother Kobi is Barkat’s deputy. What this means is that the big losers in this political saga, apart from Netanyahu and Barkat, are the people of Jerusalem themselves, as well as the general public, which will be forced to bear the costs of a superfluous ministry, just to satisfy Elkin’s political appetite and craving for power.

Elkin rightly considers himself the big winner here. He now controls two ministries, the Ministry of Immigration and Absorption and the Ministry of Jerusalem Affairs. He can appoint a director-general and manage a budget for both ministries, but he can also use the latter as a platform for personal advancement. In fact, it suits his needs perfectly, since he positions himself on the Likud’s ideological scale as being particularly close to the settler constituency.

As someone who needs the votes of Likud Party members to amass more power internally and to eventually position himself in an even higher slot on the Likud’s Knesset list, the new ministry is even more beneficial than the Ministry of Strategic Affairs that was taken from him. He can appoint his close supporters to high-ranking positions in the ministry, make pretentious announcements about Jerusalem as a united city, give interviews in this capacity, scatter empty promises about and even pass budgets to fund all sorts of projects in East Jerusalem, much like his predecessor in the position, HaBayit HaYehudi Chairman Naftali Bennett.

As minister of Jerusalem affairs, Elkin, who is known for his hawkish, right-wing views, could also set off a diplomatic firestorm in especially sensitive times. One need simply recall his fight to be allowed to go up to the Temple Mount with his family two years ago on Tisha Be’av, the day that marks the destruction of the temples. While Elkin, who was then deputy foreign minister, eventually did take his family up to the Temple Mount, the incident caused a riot, and the Elkins had to flee the site under police protection. Nevertheless, Temple Mount activists within the Likud praised him for his actions.

Elkin is considered a very smart and sophisticated politician. He is ambitious, too, and sees himself reaching the very top of the Likud pyramid one day. That is why he is expected to be especially active in his new ministry, though this will inevitably lead to gratuitous squabbling and arm wrestling with Jerusalem’s mayor.

But that is not the only place where we can expect to see power struggles and outright fighting over matters of jurisdiction and who gets credit for what. There is also the Foreign Ministry, which Netanyahu was forced to break up in his efforts to appease senior members of the Likud. His partition of that ministry into smaller fiefdoms will certainly lead to power struggles over jurisdiction and result in absurd situations.

As minister of immigration and absorption, Elkin will oversee Nativ, the liaison office with the Jews of the former Soviet Union. In his capacity as the minister responsible for strategic threats against Israel and the minister of information, Erdan will lead the struggle against the boycott of Israeli settlement products. Furthermore, in just a few months, Erdan will replace Minister of Energy Yuval Steinitz as the minister following the international community’s contacts with Iran. And that’s not all. Interior Minister Silvan Shalom will also be responsible for strategic talks with the United States and negotiations with the Palestinians, while Deputy Foreign Minister Tzipi Hotovely will mediate between them.

All of these redundant ministries were designed exclusively for the political expedience of the prime minister, who is struggling to hold his nightmare coalition of 61 seats together. Nevertheless, each of these ministries comes complete with budgets and jobs. On the other hand, the distinguished crop of ministers will be the source of countless headaches to foreign ministers and other senior visitors from abroad, once they arrive in Israel. With whom, for example, will US Secretary of State John Kerry meet? With the prime minister? With Shalom, who, as we have seen, is responsible for negotiations with the Palestinians? With Erdan, who is responsible for the fight against Iran’s nuclear program? Or with Hotovely, who claims to be the acting foreign minister?

It is a good thing that the coalition is so narrow, since that means that ministers must reduce their overseas travel, as the absence of coalition members could risk the majority while voting. In other words, ministers will scarcely leave the country and waste their time meeting with their foreign counterparts — on official business, of course. Everyone participating in this masquerade knows that if there are any real negotiations with the Palestinians or any significant actions pertaining to the nuclear agreement, the person leading the effort will be the prime minister and only the prime minister, front and center.

It is unfortunate that there isn’t a single righteous person in Sodom with the audacity to get up and say that the ministry he received is more than sufficient, that he plans to work there morning, noon and night and that he doesn’t need any other hollow titles at the public’s expense.