After Elkin missed out on the ultra-Orthodox deal, it’s not clear that Netanyahu would go out of his way to support him – he’ll certainly prefer his personal interests with the ultra-Orthodox. If residents of East Jerusalem would vote, they would decide who the next mayor would be. 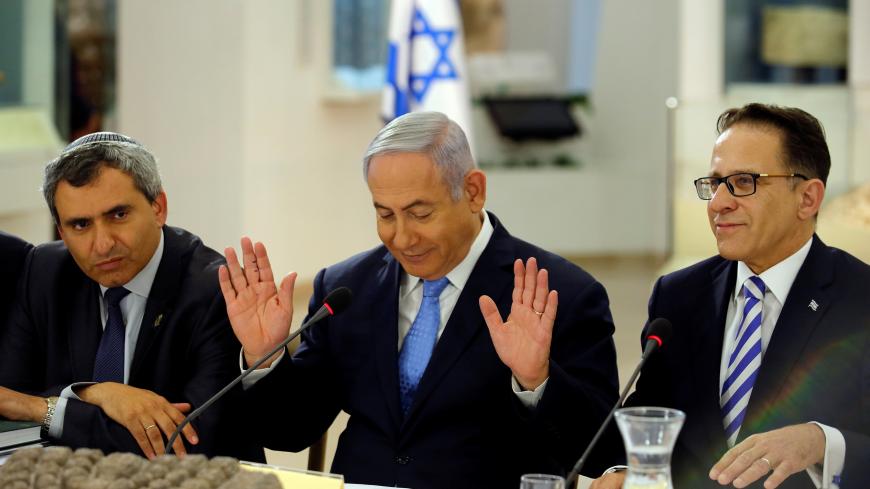 While Prime Minister Benjamin Netanyahu indeed released a video endorsing the candidacy of Minister Ze'ev Elkin in the election for mayor of Jerusalem, it’s doubtful that aside from this obligatory endorsement he would go out of his way to support him.

It’s not that the impassioned Oct. 30 election doesn't interest the prime minister — quite the opposite. But it’s not at all clear that his interests and those of Elkin match up. Alongside Elkin, who is considered a strong candidate, stands Moshe Leon, a close associate of chairman of Yisrael Beitenu party Defense Minister Avigdor Liberman and chairman of Shas Party Interior Minister Aryeh Deri. It seems that the two of them joined forces to get Leon elected and managed to garner him the support, more precious than gold, of the two large groups of ultra-Orthodox: Shas and Degel HaTorah. The Sept. 20 report of this deal hit Elkin with surprise and reshuffled the cards. Afterward, a small skirmish between Elkin and Liberman broke out in the media: The former accused the defense minister of deal-making and ignoring the interests of city residents, and the latter didn’t hold back and told Elkin to stop whining.

The question is now, would Netanyahu throw all his weight and prestige in for Elkin, since the once-warm ties between them have cooled in the past year? It’s not certain. What is certain is that the political arena in Jerusalem is boiling hot and it has ramifications for national politics, even for power relations between the ultra-Orthodox factions in the governing coalition regarding the ultra-Orthodox Enlistment Law crisis. So far, the ultra-Orthodox and Liberman have confronted each other on the law, but joining forces to promote Leon’s candidacy could signal that the relationship is changing. In any case, Netanyahu would certainly first consider his own interests with the ultra-Orthodox, especially since he himself faces an election year — even if Elkin pays the price.

While Leon, a well-known businessman close to right-wing parties, is supported by Liberman and Deri — two experienced political foxes — Elkin has Netanyahu, publicly at least, and Chairman of HaBayit HaYehudi Education Minister Naftali Bennett. The significance of this support is mainly declarative — a show of force Elkin can present (he’s also supported by many Likud ministers). In actuality, he knows that the sector to decide the election is the ultra-Orthodox. Here he is at a huge disadvantage compared to Leon.

Although there are another six weeks until the election for mayor of Jerusalem, the picture of this political battle is clear as to the profile of the person who would lead this complicated city for the next five years. Mayor Barkat intends to run for Knesset with the Likud in the next elections. And so, after 10 years led by a secular mayor, his replacement will most likely be a religious right-winger.

Elkin, 47 — a religious man who previously lived in a settlement — aligns with the Likud hard-right faction. Leon, 56 — currently serving on the Jerusalem city council — is a religious right-winger and more moderate than Elkin (Leon is identified with the national-religious stream).

On the eve of the Jewish New Year Sept. 9, the Jerusalem Institute for Policy Research published a demographic profile of the city. There were no surprises there. Since the 1990s, the city has become more ultra-Orthodox; still, the numbers are interesting — especially the latent power of Jerusalem Arabs.

While the ultra-Orthodox know to use their power to act as central players in local politics in Jerusalem, which as mentioned above also impacts national politics, the Arabs of East Jerusalem purposely sit out of this arena. Since the 1967 Six-Day War and the unification of the city, East Jerusalem Arabs have boycotted the municipal election, arguing that if they participate in the election they would de facto be accepting the occupation. In the 2013 election, less than 2% participated in the election.

By law, residents of East Jerusalem (most of them not Israeli citizens) have the right to vote in municipal elections but not in elections to the Knesset. While an East Jerusalem resident cannot be elected mayor, one can be elected to the city council.

What’s new in this election cycle is that there are two lists of Arabs running for city council. The first is Al-Quds Lana (Jerusalem is ours), headed by Aziz Abu Sarah, 37, a resident of East Jerusalem who declared that he would petition the High Court to change the law to enable him to run for mayor. Abu Sarah proclaims his support for the Palestinians, but his reception has been met by violence. At the press conference where he announced his candidacy on Sept. 6, eggs were thrown at him from the audience. This was to be expected. In the past, candidates from Arab East Jerusalem have been threatened and gave up on participating in the election.

Heading the second list, called Jerusalem for Jerusalemites, is Ramadan Dabash, 51, a resident of Tzur Bahar. This list focuses only on providing services for residents of East Jerusalem.

Despite a seeming awakening among East Jerusalem Arabs, in the upcoming election, the decisive majority of the 182,000 residents with the right to vote will stay home. Considering that Barkat was elected mayor in 2013 with 110,000 votes, if the Arabs of East Jerusalem would vote, they could determine who would be the next mayor.