The victory of incumbent Jerusalem Mayor Nir Barkat in the municipal elections does not bode well for Knesset members Avigdor Liberman and Aryeh Deri, who placed their bets on his opponent. 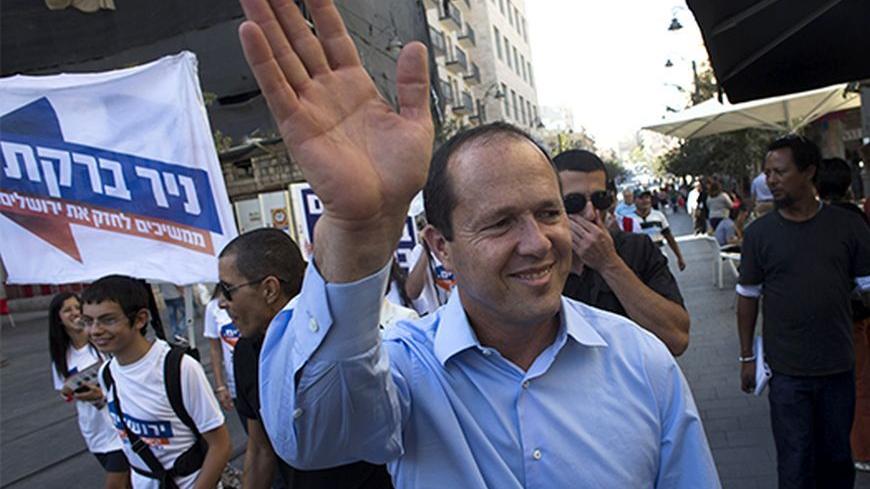 The name of the city is not recited in prayers only. It is also featured in the slogans of all of Israel's general elections: "Peres will divide Jerusalem" brought Prime Minister Benjamin Netanyahu to power in the 1996 elections. It also appears at pivotal junctures in the life of every Jew, wherever he is.

The two times in which Jerusalem was destroyed (the destruction of the First and Second Temples) are considered to this day to be the biggest disasters that befell the Jewish people alongside the decimation of European Jewry during the Holocaust.

In negotiations with the Palestinians, Jerusalem is considered the most intractable issue and the hardest to solve. Israel sees a solid and constant majority against the division of Jerusalem or against making any concessions over the holy places, chief among them the Western Wall, the only remnant of the Jewish Temple, deemed the holiest place in Judaism. When a young Jewish man takes a wife, the sentence that reverberates during the huppah matrimonial ceremony is: "If I forget thee, O Jerusalem, let my right hand forget her cunning. If I do not remember thee, let my tongue cleave to the roof of my mouth, if I prefer not Jerusalem above my chief joy." (Psalms, chapter 137, verses 5,6) What's the connection between Jerusalem and a wedding? Well, there isn't any. But it is what it is.

Theodor "Teddy" Kollek was Jerusalem's last iconic mayor. Having run the city from 1965 to 1993, he was said to be the unassailable architect that unified the city after the 1967 Six-Day War. He was also the last mayor in the city to enjoy a broad consensus. In 1993, at the age of 82, he was defeated by a relatively young politician — former Prime Minister Ehud Olmert — who then ran the city for two terms before returning to national politics in 2003 on a bizarre route to the country's premiership in 2006.

Olmert was followed by Uri Lupolianski, whose election was a historic event that gave rise to great concern among Israeli citizens. Lupolianski is an ultra-Orthodox Jew. That was the first time that Israel's capital "fell" into ultra-Orthodox hands, causing many Israelis to be doleful. The ultra-Orthodox rule of the city lasted for one term. In 2008, Nir Barkat, who had failed his previous mayoral bid, was able to get elected mayor. A secular and successful high-tech entrepreneur, Barkat is a relatively young, energetic and promising multimillionaire, who was able to placate the shrinking secular majority in Israel while running the city for the past five years.

Israel's municipal elections, which were held Oct. 22, elicited little interest. However, the battle for Jerusalem was highly unusual amid the general indifference. Barkat was being challenged by one Moshe Leon, a 52-year-old accountant from the Tel Aviv suburb of Givatayim. He was the candidate running on behalf of former Foreign Minister Avigdor Liberman. He was also actively and publicly supported by chairman of the Shas Party, Knesset member Aryeh Deri.

This was an all-out war with highly-charged, dirty and aggressive street-by-street battles between two coalitions, each stranger than the other, carrying serious repercussions for national politics. Moshe Leon was declared candidate on behalf of the Likud-Beiteinu — Prime Minister Netanyahu and Liberman's party. And yet, he did not enjoy the prime minister's endorsement. Such a turn of events can only happen in Israel. Netanyahu preferred to keep mum and secretly support Barkat, while Liberman was waiting in the wings with fiery and vengeful eyes.

Leon is an observant Jew affiliated with Religious Zionism. During Netanyahu's first term in office, he served as the director-general of the Prime Minister's Office, replacing Liberman, who had left the position mid-term. Leon, Liberman and Deri were now pitted against their one-time partner, Netanyahu.

Afraid of Liberman's ire, the ministers from the Likud-Beiteinu Party marched over to Leon's election headquarters to demonstrate their support, albeit some reluctantly. But Netanyahu still kept silent. A few months earlier, the incumbent mayor Barkat had commemorated Bibi Netanyahu's father, Benzion Netanyahu, by naming an important intersection in the city after him. Barkat was also able to strike an alliance with the daily freebie Israel Hayom, which belongs to Netanyahu's patron, the American-Jewish casino mogul Sheldon Adelson. Supporting Leon was Israel's biggest daily Yedioth Ahronoth.

This was a glorious, neck and neck, bloody world war that drew much energy and attention. The focal point of this battle was the ultra-Orthodox electorate. Liberman and Leon entered the race with a promise that the ultra-Orthodox vote in Jerusalem was in their pocket. They came out of the race stabbed in the back quite a few times.

Barkat beat Leon by a small margin of 7%. The mayor raked in 52% of the votes while his contender got only 45%. Barkat won a second term, positioning himself well for the possibility that at the end of his term (and perhaps even sooner) he would move to take on the premiership. Israel is seeing a deep leadership crisis, an incomprehensible vacuum that makes Netanyahu the only option even for those who do not support him. As of last Tuesday, Barkat sees himself as a potential leader.

Jerusalem has a population of some 800,000 residents of whom 500,000 are Jews, 280,000 are Muslims and the rest are Christians, Druze and unaffiliated; 32% of the Jews are ultra-Orthodox, 21% observant, 26% traditional and 20% secular. This process of turning Jerusalem — Israel's capital — into a religious city with an ultra-Orthodox nucleus and a majority that is not Zionist raises concerns among all Israelis (except for the ultra-Orthodox, of course). Given this constellation, it is almost impossible to elect a secular mayor.

And yet Barkat was able to dismantle the ultra-Orthodox coalition that Liberman cobbled against him. He struck a few secret deals with a number of ultra-Orthodox groups, and won. For that to have happened, one of these groups had to appoint an ultra-Orthodox contender by the name of Haim Epstein, who received only 7,000 votes. At the same time, another Hassidic group put blank slips in the ballot box. All told, some 17,000 ultra-Orthodox votes were subtracted from the Liberman-Leon deal. That's the exact number Leon came up short, but that will all soon be forgotten.

The battle for Jerusalem already highlights some interesting processes that Israeli politics is undergoing. First, it's the ultra-Orthodox. They're no longer this black bloc of tens or hundreds of thousands of voters who are instructed whom to vote for and deliver. In these elections, the ultra-Orthodox split into groups and clans. Running a Turkish bazaar, they traded, bought and sold, ultimately deciding the results.

Second, there is Liberman. His magic touch is starting to wear off. He did not deliver in Jerusalem with the secular and Likud votes, and it also seems that the Russian constituency is starting to lose its monolithic identity, diverging into different groups.

And third, there is Deri. He, too, faced some daunting obstacles while clawing his way back up to the super-prestigious standing he had enjoyed in the Shas Party and generally within the public prior to his conviction and imprisonment more than 10 years ago.

These two — Liberman and Deri — personify more than anything else Israel's old politics.

Notwithstanding, it's all dwarfed ahead of Nov. 6, when the verdict in Liberman's trial is meted out. If found not guilty, Liberman would return that very same day to the center stage of Israeli politics, assuming the position of foreign minister and executing the vendetta he wants to exact from Netanyahu. If convicted of a felony with "moral turpitude," he would retire from politics, probably never to return.

Nov. 6, 2013 will be a watershed in Israeli politics. There isn't anybody in the country's political circles who doesn't look ahead to this day, some with hope, others with great trepidation.