With municipal elections two years away, the ultra-Orthodox are already working to unite behind a candidate as Jerusalem's current mayor, Nir Barkat, considers a run on Israel's national scene. 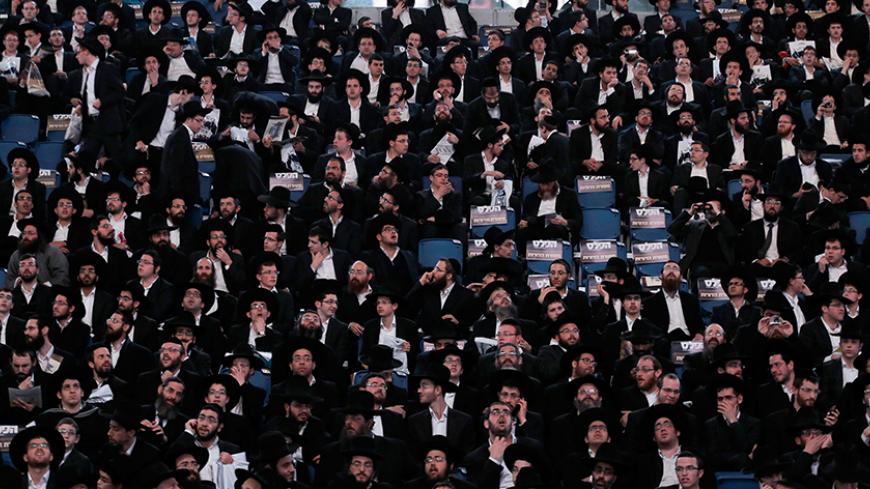 Just two months ago, Jerusalem Mayor Nir Barkat made the surprising decision to join the Likud, even insinuating that he eventually plans to run for head of the party. The possibility that a strong mayor like Barkat would abandon the corridors of Jerusalem City Hall earlier than anticipated so that he could contend in the national arena has reinvigorated local Jerusalem politics, two and a half years before the municipal elections are officially scheduled to take place. Many in the ultra-Orthodox community are placing high hopes on this new development. They tried to win back the mayor’s office twice in the past few years, but with no success. Now they believe that the goal is within reach. They seem to believe that Barkat has already exhausted all the potential inherent in the mayor’s office and is ready to move on.

Barkat comes from the business sector. A tech investor and entrepreneur, he first ran as an independent candidate for mayor of Jerusalem in 2003. The secular vote was split (Yigal Amedi from the Likud ran against him), and Uri Lopoliansky, an ultra-Orthodox candidate, was able to win that election. Five years later, in 2008, Barkat took advantage of divisions within the ultra-Orthodox sector and finally won the office. He ran again in 2013, this time as an incumbent. Convinced that they would be unable to defeat him, the ultra-Orthodox decided that they had no choice but to support Moshe Leon, a religious nationalist candidate who had previously served as director-general of the prime minister’s office and chairman of Israeli Railways and was supported by Yisrael Beiteinu Chairman Avigdor Liberman. Despite widespread support from the ultra-Orthodox community, Leon ultimately lost to Barkat.

It turns out that Leon, who now serves as the representative of a one-person faction in the city council, has never abandoned his dream of becoming mayor. Over the past few weeks, he has held a series of secret meetings in private homes and restaurants with leading ultra-Orthodox political figures. His goal seems to be to win their support and to prevent them from choosing a candidate from their own ranks. On the other hand, the ultra-Orthodox are also hard at work behind the scenes to achieve their main objective. They want to pull together and consolidate their ranks, because without doing so, they have no real chance of winning the election. It now looks like Yahadut HaTorah's candidate is current Deputy Mayor Yossi Deutsch. Even his political rivals admit that he is the ultra-Orthodox candidate with the best chances of being elected mayor.

The ultra-Orthodox, some 35% of Jerusalem’s Jewish population, turn out to vote in high numbers. In their view, that they do not have one of their own in the mayor’s office is a political fiasco (particularly since the Arab residents of Jerusalem do not play an active role in the political process for ideological reasons).

For years, the secular and ultra-Orthodox communities have been locked in a struggle over Jerusalem’s character. The ultra-Orthodox claim that the religious status quo in Jerusalem (formulated when the State of Israel was first established) has changed for the worse. On the other side, there are those who claim that the situation is evolving in the opposite direction, as evidenced by demonstrations against the opening of malls and cinemas on the Sabbath. To the ultra-Orthodox community, the idea that such places would operate on the Sabbath is especially distressing in the holy city of Jerusalem, and the only way to preserve its sanctity is by winning back the mayor’s office.

One senior source in Yahadut HaTorah claims that unity is certainly possible within the ultra-Orthodox sector, and that efforts are already underway to bring the disparate forces into line. He tells Al-Monitor on condition of anonymity, “The ultra-Orthodox have long ago learned that divisiveness can cost them. Right now, we have a good chance of pulling ourselves together. If it works, victory is in our pocket. Right now, it is all up to us.” He went on to clarify that he finds it hard to imagine a situation in which Leon is the only non-ultra-Orthodox candidate, or that the ultra-Orthodox would support a candidate whose political patron is Liberman. “Liberman is now the most anti-ultra-Orthodox element in the political arena. He even surpasses Yair Lapid in that. How exactly could the ultra-Orthodox community support someone from the Yisrael Beiteinu party?”

Then there are two other factors with significant influence over who might be the next mayor: Shas Chairman Aryeh Deri and Barkat himself. Leon’s supporters already say that Barkat has promised them his support. For his part, Deri will face a serious dilemma once he is forced to decide between an ultra-Orthodox candidate (Deutsch) and a Sephardic candidate (Leon). His support could tip the balance.

Regardless of whom the candidate is, when Barkat announced that he was joining the Likud, all bets were off as to whether Jerusalem’s municipal elections will take place in 2018 as officially scheduled. The conflicting sides are left to prepare for any eventuality. If the current government falls and national elections are advanced, Barkat could decide to resign as mayor to compete on the national stage. Under such circumstances, Jerusalem would immediately be forced into an election cycle, too (though only for mayor). If, however, Barkat resigns within a year of the official election date, the city council would then have to choose a representative to serve as interim mayor until the scheduled elections.

The mayor of Jerusalem is one of the most coveted positions in all of Israel. It stands out from any other mayoral office. After all, Jerusalem is both the nation’s capital and its largest city — and, of course, one of the best known cities in the world. For the ultra-Orthodox, winning this office would be a major victory. According to a study published in 2009, the ultra-Orthodox will constitute some 45% of the city’s total population by 2020 and reach 50% by 2030. As such, even if the sector fails to take the office of mayor in the next round of elections, it is only a matter of time before there is an ultra-Orthodox mayor of Jerusalem.