Differing scenarios for a post-Netanyahu government

Israeli law would not force an indicted Prime Minister Benjamin Netanyahu to resign, but behind the scenes a war of succession is already underway. 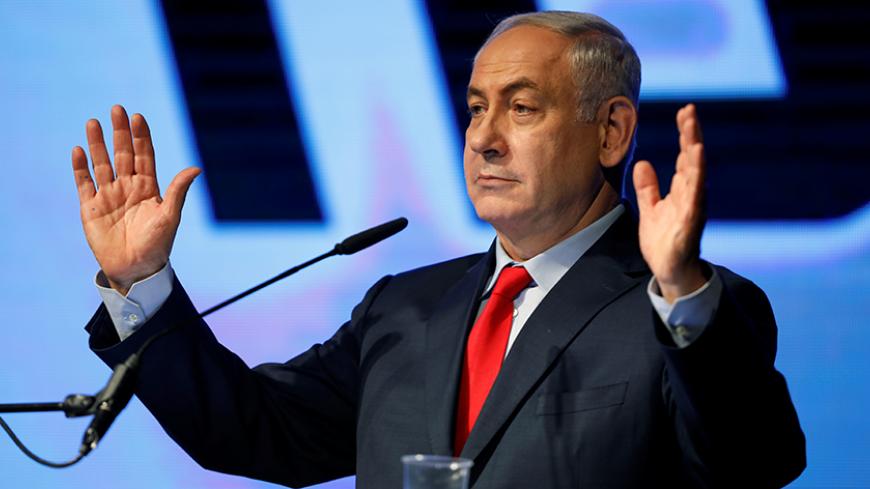 Israeli Prime minister Benjamin Netanyahu speaks during an event by his Likud Party to show support for him in Tel Aviv, Israel, Aug. 9, 2017. - REUTERS/Amir Cohen

The fact that Ari Harow has turned state witness against Prime Minister Benjamin Netanyahu constitutes a strategic milestone in the investigations against Netanyahu. If, until now, it had been impossible to guess how the investigation would end, now the logical gamble is that at least one bill of indictment will be filed against Netanyahu. Israel’s enforcement authorities do not usually grant generous plea bargains to people who deserve to sit behind bars such as Harow (the prime minister's former chief of staff) except in the pursuit of one goal: to incriminate the person who manipulates the state witness.

As we recall, former Prime Minister Ehud Olmert abandoned his post amid the type of investigations that are now being conducted against Netanyahu. More so, it would seem that Netanyahu is under suspicion of charges that are more serious than those against Olmert, just before the latter resigned. Does all this signal the end of the Netanyahu era? This is very likely to be the case, although the timetable involved is rather obscure. And in Israel, nothing is over until it’s over. We are now only at the beginning of the process, more or less.

Israeli law does not state that a prime minister undergoing criminal proceedings must resign. Actually, according to law, he can continue to serve in his position until after he is convicted and the verdict in his case is conclusive — assuming that he or she is convicted “with shame.” In other words, Netanyahu can argue that he wants to continue as usual as prime minister, even during the course of the investigations (which is what is happening right now), and even after he is indicted and goes to trial. Netanyahu uses this argument and his Likud adherents support him. But the chances are low, even minuscule, that this would actually happen.

Olmert resigned from the premiership following a political process. Once the magnitude of the investigation against him became public knowledge, and once American Jew Moshe Talansky gave preliminary testimony against Olmert, the public atmosphere became hostile to the prime minister, forcing him to resign. Olmert’s senior coalition partner, Ehud Barak, who headed the Labor Party at the time, gave Olmert an ultimatum: either resign or the Labor Party would resign from the coalition and the government would fall. Olmert resigned in September 2008, and Tzipi Livni tried to assemble a government but failed. Israel called for new elections, and Benjamin Netanyahu entered the Prime Minister’s Office in April 2009.

This same process would or could also put an end to Netanyahu’s tenure. The candidates to carry this out are his two most senior coalition partners: Finance Minister Moshe Kahlon and Education Minister Naftali Bennett. True, at this very moment all of Netanyahu’s partners extend him political credit. They avoid answering questions about what they would do if a bill of indictment is, indeed, filed against the prime minister. But behind closed doors they admit that they could not allow such an unprecedented situation to take place.

“Israel cannot allow itself to be governed by a prime minister who is a criminal defendant. The dry law is not enough: We’re talking about a high-level issue involving public ethics,” says a high-ranking Kulanu personage — the party of Finance Minister Kahlon — speaking on condition of anonymity. Those in the close circle of HaBayit HaYehudi Ministers Naftali Bennett and Ayelet Shaked also speak the same language. For the sake of appearances, Shaked said Aug. 5 that the prime minister would not be forced to resign if and when he is indicted. Afterward she corrected herself and said that in this situation the coalition factions would have to weigh the matter and decide what to do.

The more time that passes, the greater the odds are that such a scenario will take place. The estimated timetable is at least a year, but it could happen earlier. Everything depends on the intensity of the publicity and leaks from the investigations, and especially from the testimony of Harow. Netanyahu’s image has already suffered in recent months, in light of the abundance of negative publicity and testimony that have already been leaked. The submarine affair, which entangled Netanyahu’s closest associates, also contributed to this situation.

Now Netanyahu is fighting for his political survival while trying to send “business as usual” signals. On Aug. 9, the Likud held a large demonstration of support for the prime minister in Tel Aviv. Netanyahu’s people are urging Knesset members and ministers to go to the media to defend the prime minister, but they have met with only partial success. The ministers are embarrassed by the whole affair; Knesset members are dragging their feet. Behind the scenes, a war of succession is already underway, full speed ahead.

Should Netanyahu resign, this may not necessarily mean that new elections must be held. The most likely scenario is that elections will be announced, but President Reuven Rivlin could charge one Likud Knesset member with the task of assembling a new government. If the candidate receives the backing of the Knesset, such a government could serve until the conclusion of the term of office of the current one in 2019.

The problem is, no one in the Likud at the moment stands out as a possible consensus candidate. The most prominent candidate is Likud’s Transportation Minister Yisrael Katz. Meanwhile, there are two former ministers who are probably gnashing their teeth over their fatal mistake in resigning from the Knesset, each one in turn. The first is former Minister Gideon Saar, who resigned before the last elections, after he was subjected to Netanyahu’s ire. If Saar were an active Knesset member now, he would automatically become a leading candidate to inherit Netanyahu’s position.

This is also true for former Defense Minister Moshe Ya’alon. If Ya’alon had agreed to Netanyahu’s offer to give up the defense portfolio for the Foreign Ministry, and if he had not quit the government and the Knesset, then there would be a consensus today for Ya’alon to replace Netanyahu — if and when the latter is forced to vacate his position.

In the absence of these two prime candidates, other Likud members such as Katz, or perhaps even Cabinet ministers Gilad Erdan or Yuval Steinitz are likely to fight over the leader’s seat and on establishing a replacement government. Even though most of the coalition factions don’t want new elections and prefer to finish out the present government’s term of office, the chances are low for finding a suitable candidate to replace Netanyahu. One way or another, the writing on the wall seems to indicate that we are moving toward the conclusion of the Netanyahu era. Now it’s only a matter of time.