Knesset member Orly Levy-Abekasis will join a growing list of right-wing party leaders who emerged from the Likud and who hold power throughout the ranks of the Israeli government. 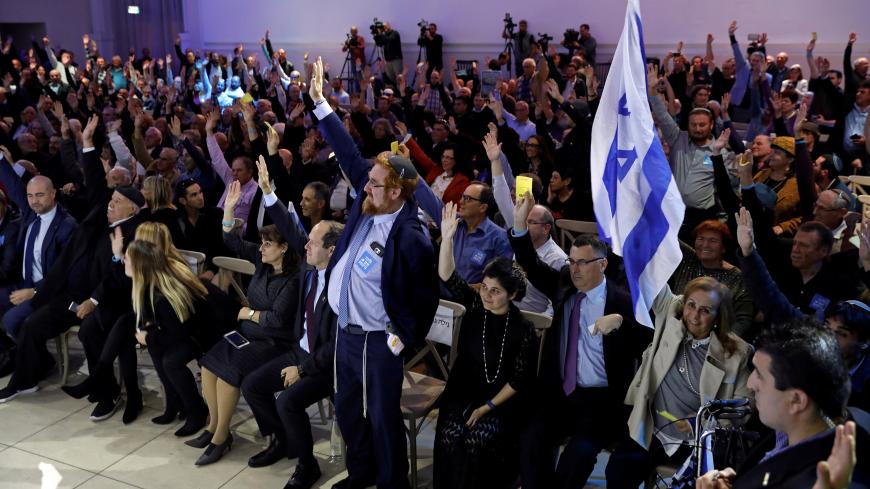 The new party being formed by Knesset member Orly Levy-Abekasis might not have a list of candidates yet — it doesn’t even have a name — but it is still polling at eight seats, according to survey results published April 23. As of now, it looks like it will be the brightest star in the next election.

Over the next few weeks and months, after the new party files paperwork with the Registrar of Parties, Levy-Abekasis will join the growing list of party leaders emerging from the Likud. As of now, five parties are headed by people once active in the Likud. Most of them are now in the highest echelons of the center-right leadership and play important decision-making roles in the country.

Levy-Abekasis is the daughter of former Foreign Minister David Levy, an icon of the Likud’s social wing. She was raised on the movement’s politics from an infant, but she eventually decided to join Yisrael Beitenu, led by Defense Minister Avigdor Liberman, himself a former Likud member. Liberman served as director general of the Prime Minister’s Office in 1996, during Benjamin Netanyahu’s first term, after having been director general of the Likud. For years, he was considered the most powerful and influential person in the Likud.

After breaking with Netanyahu in 1999, Liberman left the Likud and established Yisrael Beitenu, which won 15 seats at its height, in the 2009 elections. Since then, Liberman has been a senior minister in every government. He currently holds seniority on the Security Cabinet.

The chairman of HaBayit HaYehudi, Education Minister Naftali Bennett, and his party’s second highest ranking member, Justice Minister Ayelet Shaked, also have a history with the Likud. They ran Netanyahu’s office when he was Likud chairman and opposition leader in 2006. When relations between them and Netanyahu and his wife, Sara, soured, they left the office and considered running for a place on Likud’s Knesset list. After they realized that Netanyahu would block them from running, they decided to strike out on their own. They took over HaBayit HaYehudi and became key figures on the right and in Israeli politics in general. Now, they both sit on the Security Cabinet.

A special place of honor on the list of party leaders who emerged from the Likud must be recognized for the chairman of Kulanu, Finance Minister Moshe Kahlon, who began his political career in the Likud's Haifa branch office. Like Levy-Abekasis, Kahlon had been a star in the Likud. After a particularly successful term as a popular minister of communications, he felt that Netanyahu was blocking his further advance. As Kahlon tells it, Netanyahu felt threatened by him and would not let him flourish. As a result, Kahlon spread his wings and founded Kulanu, attracting former Likud activists, including many leaders of local government. The party won 10 seats in the 2015 elections, after which Kahlon joined Netanyahu’s right-wing government as finance minister, one of the three most senior positions in government. Kahlon is also a member of the Security Cabinet.

The last person on the list is former Defense Minister Moshe Ya’alon, who was removed from his position by Netanyahu in May 2016. He went on to establish the nonprofit organization Manhigut Acheret (Another Kind of Leadership), which is expected to evolve into a political party. Ya’alon quit the Likud and became one of Netanyahu’s harshest critics.

Most ministers in the current government are either members of the Likud, the “mother party,” or former members of the party, as are most members of the Security Cabinet. It doesn’t end there. The speaker of the Knesset, Yuli Edelstein, is also a leading member of the Likud, as is the president of Israel, Reuven Rivlin. The list can even be expanded to include the Israeli ambassador to the United Nations, Danny Danon, a key figure in the party.

It is a fascinating phenomenon that members of the Likud past and present can be found in key positions throughout the government, and it explains how the right became the largest and most powerful bloc in the Israeli political system. The Likud still stands at the center of that bloc, surrounded by satellite parties whose leaders were once Likud members. They may have had their feuds with Netanyahu, but they joined his government anyway, as natural partners.

There is a certain vibrant dynamic to the people who have left the Likud, usually because of some squabble with Netanyahu, and have gone on to establish new parties on the right that are becoming a rising force in Israeli politics. On the other hand, this phenomenon also has a somewhat less glamorous side, at least as far as the Likud is concerned. As long as Netanyahu heads the party, the possibility of flourishing alongside him is practically nil. Netanyahu is simply incapable of allowing Knesset members or ministers from his party to share in the spotlight. They are forced to operate in his shadow.

Regardless, a quick glance at the number of parties led by former Likud members gives a sense of how powerful the party is in the political system. It is more than just the fact that the Likud has been Israel's ruling party for almost a decade without interruption. It is also because the Likud inhabits the DNA of the other parties. Even Kadima, which held power from 2006 to 2009, grew from the Likud after Ariel Sharon split from the party. Several senior members of Kadima, including Ehud Olmert, who served as prime minister after Sharon, also emerged from the Likud. In fact, after Ehud Barak lost power in 2001, Israel has since been governed by prime ministers from the Likud: Ariel Sharon, 2001-06; Ehud Olmert, 2006-09; and Netanyahu, 2009 until now.

The wide reach of Likud “expats” in the political system and the many years they have been a major political force have made an enormous impact on the Likud itself. It ensures that it remains a vibrant and politically powerful party. The reason is the access to power, decision-makers and government authority enjoyed by Likud activists at all levels. They do more than just meet at party events. They also play an active role in government as advisers, aides and director generals of countless official organizations and ministries. This means that they are close to almost every government minister, not just those from the Likud. Likud activists are personally acquainted with Liberman, Bennett, Shaked, Kahlon, Ya’alon and even Levy-Abekasis from when they were an integral part of the party.

With Levy-Abekasis about to join the exclusive club of former Likudnik party leaders and likely become a senior minister in the next government, it looks like the Likud diaspora will continue to shape Israel's political system and the center-right bloc for years to come.