Senior Likud figures who quit the party are flourishing and occupy important positions in the government, while senior Likud members are afraid to challenge Prime Minister Benjamin Netanyahu. 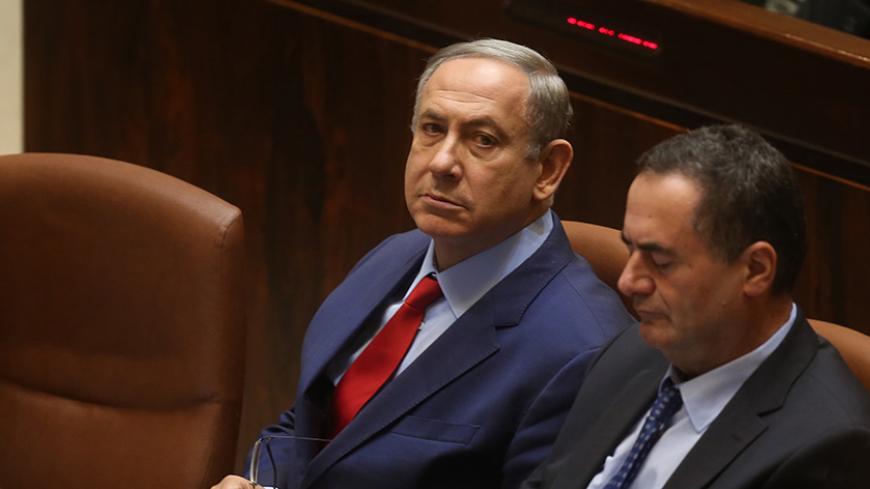 Israeli Minister of Transport Yisrael Katz (R) sits next to Prime Minister Benjamin Netanyahu during the opening of the winter session of the Knesset, Jerusalem, Oct. 31, 2016. - MENAHEM KAHANA/AFP/Getty Images

Two polls released March 10 gave a party headed by former Defense Minister Moshe Ya'alon a disappointing four to six seats. It is hardly the result that Ya'alon was hoping for, but anyone rushing to write him off is doing so prematurely. On March 13, Ya'alon announced that he was finally leaving Likud. Over the next few weeks, he is expected to launch his own right-wing party, along with a list of supporters. The party will advocate respect for the Supreme Court and the Israel Defense Forces' rules of engagement. He will also present a diplomatic, security and civil agenda to serve as an alternative to that of Prime Minister Benjamin Netanyahu's Likud. Quite a few people on the right, including in Likud, will follow Ya'alon as soon as the party is established and begins an organized campaign. The consequences of this should be seen in future polls.

Leaving Likud and forming an independent party could turn out to be the best thing to ever happen to Ya'alon. He can now count himself among a respectable and rather large group of ministers who have quit Likud or Netanyahu's office to launch independent political careers. Some of them now hold senior portfolios in the government and positions of power opposite Netanyahu. In fact, almost all the more-important and prestigious portfolios in Netanyahu's government are not in Likud hands.

Yisrael Beitenu Chairman and Defense Minister Avigdor Liberman had been director general of the Prime Minister's Office during Netanyahu's first term (1996-99) before quitting and forming his own party. Though he now heads a small party with just six Knesset seats, he is the most senior minister in the government and is a steady political threat to Netanyahu while advocating for an independent diplomatic agenda. For instance, on March 13, in response to reports of relaunching negotiations with the Palestinians, Liberman once again released his plan for an exchange of territories and populations as the only way to reach an agreement.

The chairman of Kulanu, Finance Minister Moshe Kahlon, was the most popular minister from Likud until 2013, when he quit after a fight with Netanyahu and formed his own right wing-oriented party focused on social issues. It won 10 seats in the 2015 elections, after which Kahlon demanded and received an expanded Finance Ministry, because, like Liberman, he knows how to keep Netanyahu on a “short leash.” He also represents an independent agenda on socioeconomic issues near and dear to him, fighting regularly with the prime minister in his efforts to advance them.

Two other ministers and members of this group are the leaders of HaBayit HaYehudi — Education Minister Naftali Bennett and Justice Minister Ayelet Shaked. They both worked alongside Netanyahu when he was head of the opposition (2006-07), and they both ended up quarreling with Netanyahu's wife, Sara. In each case, they picked up and left, slamming the door behind them. Sometime later, they returned to the political arena with their own base. Although they are backed by a party with only eight seats, they both advocate for the settlements from within the government, wage power struggles with Netanyahu and reap some successes, as they did with the Regularization Law, which legalized unauthorized settlements. An effort to weaken the Supreme Court, a platform closely identified with their party, was a source of one of Shaked's major victories against the legal establishment when she managed to have new, supposedly conservative justices appointed to the court.

Liberman, Kahlon, Bennett and Shaked are all members of the prestigious Security Cabinet. As such, it is hard to avoid comparing them to senior Likud Cabinet members, who see themselves one day competing for leadership of Likud and the Prime Minister's Office, but who are still forced to operate in Netanyahu's shadow. This group includes Transportation Minister Yisrael Katz, Public Security Minister Gilad Erdan and former Minister Gideon Saar, who is expected to return to politics and compete for a place on Likud's Knesset list after a lengthy break from politics. In the event that Netanyahu is forced to resign, Saar will join the two current ministers in competing to lead Likud.

Netanyahu has been considerably weakened by the criminal investigations against him, but no one in Likud dares challenge him by offering an official, alternative party leadership. This is an anomalous situation in a party that was famous until just a few years ago for its impassioned and turbulent leadership fights. It was not this limited during the days of Moshe Arens, Yitzhak Shamir and David Levy, in the 1980s and 1990s. For years, Netanyahu himself posed a leadership alternative to the late Prime Minister Ariel Sharon, offering a diplomatic and security agenda that challenged Sharon's plan for disengagement from Gaza.

Likud has a reputation as a party that does not depose its leaders even if they lose an election. All the more so, they are unlikely to dispatch a serving prime minister. Nevertheless, there is plenty of room to maneuver in the gap between deposing a party chief and remaining submissive or passive. The problem is that Netanyahu's potential heirs do not take advantage of that space.

Erdan, Katz and Saar are members of an emasculated generation. They long for and prepare themselves for the day after the Netanyahu era, but they do it warily, only in their innermost chambers, without proposing alternative leadership possibilities or new agendas on diplomatic, security and economic issues. Not one of them has announced that he will run against Netanyahu at some point in the future.

The three of them have, however, had more than enough of Netanyahu, who has never given them an opportunity to grow. Time and again, he has kept them from top ministerial posts, even though they rank high on the Likud Knesset list. As an example of this, Netanyahu still refuses to relinquish the Foreign Ministry and give it to one of them. His main concern is that someone might use it to foster a new leadership alternative within Likud.

Then there is Ya'alon. Leaving Likud to form his own party has given him public and political stature as someone who did not succumb to Netanyahu's emasculating power or abandon his values and worldview. Ya’alon resigned from the government after he was removed from the Defense Ministry, which was given to Liberman in May 2016. Soon, Ya'alon will be returning to the public eye with his own political base.

Even as head of a small party, Ya'alon will have considerable bargaining power. He could be the person who breaks the balance of power between the two main blocs by joining a government headed by Yesh Atid Chairman Yair Lapid. Whether Netanyahu survives his investigations and continues to lead Likud in the next elections or whether someone else heads the party, the cost that Ya'alon will demand to join a coalition will be very steep, even if he does only have six seats.