Is Israel's popular justice minister a threat to Netanyahu? 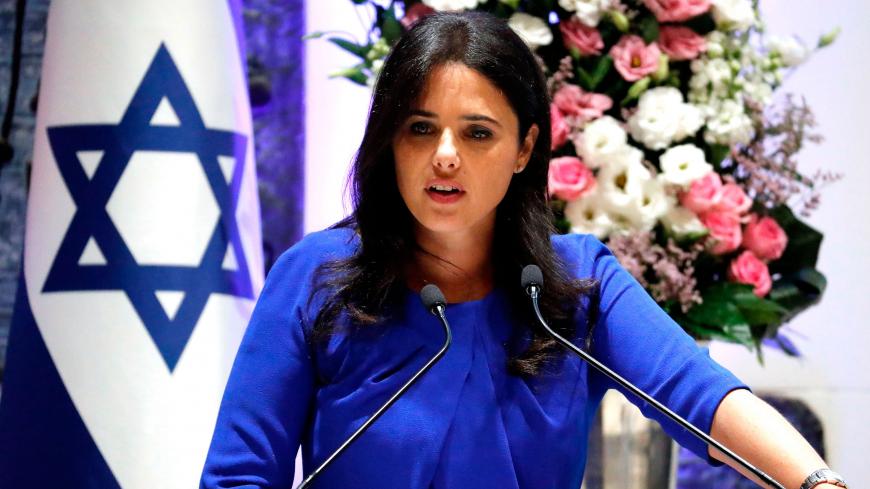 It was only a matter of time before one of Israel's media outlets would raise the gauntlet and look into how popular Justice Minister Ayelet Shaked would be as head of the Likud Party. On July 13, Maariv released the results of a dramatic poll, which indicated that if she headed the ruling party, she would win as many seats as the current party chair, Prime Minister Benjamin Netanyahu — 33 Knesset seats.

Even if the results have no practical meaning, they grant the young minister from HaBayit HaYehudi the title of "the most popular politician in Israel" after Netanyahu, who is now at the peak of his public and political power.

This is no small feat. The last woman to hold this title was Zionist Camp senior Tzipi Livni in the 2009 election when she headed the Kadima Party. Since then, the political system has failed to create a rising star who could threaten Netanyahu. Yet this poll shows that even the right considers Shaked to be a realistic candidate for prime minister.

The justice minister is, in fact, quite the phenomenon. She is a politician on the rise, who has succeeded in standing out not only among the right but also among Israel's political leadership. Her impact on the public agenda exceeds even that of such senior political figures as Kulanu Chairman and Finance Minister Moshe Kahlon, Yisrael Beitenu Chairman and Defense Minister Avigdor Liberman, and Yesh Atid Chairman Yair Lapid. She even beats out the chairman of her own party, Education Minister Naftali Bennett.

That said, Bennett is the elephant in the room. He and Shaked have been the most powerful duo in Israeli politics and the settler-aligned right for years. Officially, he is the more senior member of the party, but as Shaked gains popularity within HaBayit HaYehudi as well, she is both overshadowing him and highlighting his weaknesses. So far, however, their partnership has managed to overcome this obstacle.

"Bennett is highly supportive of her successes and she of his achievements, but nevertheless, it is obvious that there is some hidden tension deep inside," a senior member of HaBayit HaYehudi told Al-Monitor on condition of anonymity. "After all, we are talking about young people who are both super talented and super ambitious and who have both stated publicly that they see themselves as candidates for prime minister." It is also worth noting that Shaked makes a point of saying that she will only run for the premiership after Bennett. The problem is that the head of her party hasn't really been able to take off. In polls measuring suitability for the position of prime minister, he wins just a few percentage points.

On the other hand, the Maariv poll finds that Shaked would even defeat former Chief of Staff Benny Gantz, another "hot" and highly desirable commodity in Israeli politics. While the possibility of him running is unrealistic at this time and at least for the near future, the results (of this Shaked-Gantz scenario) themselves are fascinating. As head of the Likud, Shaked would win 31 seats, while Gantz as head of the Labor Party would win only 24. What this means is that Israelis trust her on security and diplomatic issues no less than they trust him, and that her roles as an activist minister of justice and the only woman in the Security Cabinet are helping to establish her position.

The current brouhaha surrounding Shaked began on July 7 after the former head of the coalition David Bitan said in an interview that Shaked is a popular figure in the Likud and that if she did join the Likud, she would receive a warm welcome. It is Bitan's assessment that if Shaked would run in the party's primaries, she could win the first place slot, overcoming all the powerful figures in the Likud, including Culture Minister Miri Regev and senior ministers past and present, like Yisrael Katz or Gideon Saar.

Bitan is a politician with sharp instincts. Shaked has a good relationship with him, just as she does with other senior members of the Likud. Still, it would be safe to assume that this was no planned statement, both because it was damaging to the prestige of members of his own party and, more importantly, because the statement surely irritated Netanyahu and his wife, Sara. The couple's relationship with the young politician hasn't improved since 2008 when Shaked served as bureau chief for Netanyahu (who was then chairman of the opposition). After getting into a feud with Sara, she was forced to leave her position. Shaked's appointment as a senior minister because of the coalition agreements Netanyahu made after the last 2015 election posed a serious problem for the prime minister.

Bennett, who served at the time as Netanyahu's chief of staff, also had a run-in with the prime minister's wife and found himself cast out of the Likud chairman's inner circle. It was in those years that the friendship between Shaked and Bennett flourished, with the two of them continuing their public activism as the voice of Israel's modern young right. On the other hand, they also realize that the only way to have a real impact and implement their ideology runs through the prime minister's office, and that the only way to get there is through a major party like the Likud.

Unlike Bennett, who isn't very popular in Likud circles, Shaked is a welcome figure in the ruling party. Party members admire her effective struggle as justice minister to change the character of the legal system. The support she receives from them contributes to her levelheadedness, eloquence and demeanor, and her ability to win admiration even from the left. While they may see her as an ideological rival representing the far right, they also regard her as someone committed to the country's well-being.

At the beginning of her political career, Shaked was a protege of Netanyahu. He taught her how to maneuver in the political playing field and how to relay brief, pointed messages to the public. That is how she succeeded in reaching the top in such a relatively short time. At just 42 years old, she worked at a high-tech company until 12 years ago, and the possibility of her becoming the No. 2 person in a religious party representing settlers would have seemed ridiculous when she entered politics. Shaked is the only secular member of the party's Knesset delegation, and she lives in northern Tel Aviv in a neighborhood considered a bastion of the left.

It will be interesting to see what happens now in the prime minister's residence as a result of the Maariv poll and Bitan's remarks. Netanyahu is well-known for the intuitive way he eliminates any political figure who begins to pose a threat to him, and Shaked certainly fits that category. At the same time, he also realizes that the threat she poses is theoretical. There is no realistic scenario (for the moment) in which she would run against him in the Likud. Still, Shaked's popularity must open up a Pandora's box in the Netanyahu home. The justice minister is certainly fortunate that she is not part of the Likud, since she is not dependent on the prime minister's whims like the senior party members whom he attacked and who were forced to resign from the party if not from political life entirely. The fact that she is a member of an independent party with its own power base, and which will most likely be a part of the Likud's next coalition as well, will protect her in the near future.