Netanyahu at the mercy of the politician he loathes most 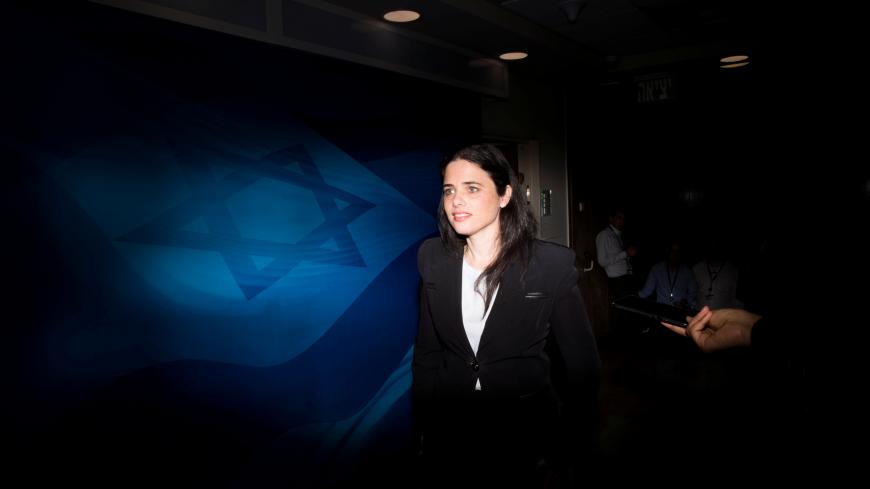 So much has already been written and said about how Prime Minister Benjamin Netanyahu loathes the chair of the Rightward party, former Justice Minister Ayelet Shaked. But nothing, whether spoken or in writing, has managed to relay the passionate anger that Shaked conjured up in Netanyahu as the way he screamed at former Communications Minister Ayoub Kara when he dared to admit he was cooperating with her.

The “shouting match,” which took place in 2017, was first made public by Channel 13 on Sept. 2. The background for this conversation was a report in the economic paper The Marker that Shaked and Kara were working together on legislation to save right-wing Channel 20. Netanyahu was furious that Shaked was getting credit for this. “Tell me, have you gone mad? ‘Ayoub and Shaked?’ That’s what’s going to save Channel 20?” Netanyahu shouted at a stunned Kara. When Kara tried to explain that he wanted Shaked to pass the law quickly, Netanyahu pounced on him. “Ayoub, have you gone mad? They’re slowing it down. Who’s doing this thing? Who did it? Who initiated it?” Even when Kara responded, “But it’s ours!” Netanyahu refused to calm down. “Excuse me? Shaked, one of ours?” he shot back.

Very few politicians manage to make Netanyahu so intensely emotional. But while the subject at hand is a conversation that took place two and a half years ago and which focused mainly on Netanyahu’s obsessive desire to gain influence over the media market, it is hard to ignore his feelings about Shaked.

Netanyahu’s problem is that as much as he despises her and wants to ruin her politically, he depends on her for his own political survival. In fact, the morning before the Netanyahu recordings were made public, Shaked announced at a public event that her Rightward party would grant Netanyahu immunity from any indictment. “If Netanyahu asks to be granted immunity for the good of the public, we will certainly take the stability of the government into consideration,” she said. Shaked didn’t say it out of love for Netanyahu. She just wanted to prevent him from stealing Rightward's seats. Netanyahu is now doing everything he can to increase the strength of Likud at the expense of Shaked’s party, among other things. Shaked is also well aware that Netanyahu is a powerful brand on the right, so she decided to declare her fealty to him.

Actually, this has become a pattern of sorts in the soiled relationship between Netanyahu and his two rivals, Shaked and Rightward senior Naftali Bennett. Both of them worked for him over a decade ago when he was head of the opposition. Shaked was his office manager; Bennett was his chief of staff. It was a promising beginning that ended on a less than promising note. They both feuded with Netanyahu’s wife, Sara, and were eventually forced to leave office. That should have been the end of it — at least as far as Netanyahu was concerned — but Shaked and Bennett were politically ambitious. Once they realized they were unwelcome in the Likud, they took over HaBayit HaYehudi in 2012 and helped it win an impressive 12 seats. Bennett, who was then head of the party, forged an alliance with Yesh Atid leader Yair Lapid and forced Netanyahu into a coalition without the ultra-Orthodox parties. Netanyahu may have succumbed at the time, but he never forgot it.

In the 2015 election, Netanyahu took one-third of HaBayit HaYehudi’s seats in an effective campaign to “save the right.” At first, he wanted to leave the party in the opposition, but since he wouldn’t have a government without them, he was forced to give both Bennett and Shaked senior ministerial positions and membership in his security Cabinet. The depth of his revulsion was evidenced by the fact that at the signing of the coalition agreement, Netanyahu would not even shake Shaked’s hand.

Much to his chagrin, he has since watched Shaked become increasingly popular among the general public. She is now a media darling, a star on the right and one of the hottest names as a candidate for prime minister one day. His loathing for her only increased once the criminal investigations into his affairs began. Since then, the Netanyahu family has accused her of stirring the pot behind the curtains just to harm him.

After the April election, Netanyahu believed he was finally rid of Shaked and Bennett. The New Right party they formed after quitting HaBayit HaYehudi failed to pass the electoral threshold, and they were left out of the Knesset. But then the plot became complicated. Yisrael Beitenu leader Avigdor Liberman refused to join the new coalition, so Netanyahu decided to dissolve the Knesset — even though it was only just elected — and call a new election. When Shaked tried to join the Likud, Netanyahu and his wife blocked her. Having no other choice, Shaked teamed up with her old partner Bennett, but this time she managed to use her popularity to become the leader of a list uniting several right-wing parties (Rightward) and return to a position of influence.

Netanyahu now finds himself facing off against Shaked yet again. He is doing everything he can to take the seats he needs from Rightward in order to ensure Likud is the biggest party in the Knesset. The problem is that Shaked is fighting back. She knows there is a good chance she will lose a few seats to Netanyahu, but things are likely to change in her favor on the day after the election — under almost any circumstances.

Netanyahu is now waging the fight of his life. It is a real fight over his political future and perhaps even his personal freedom. The likelihood of him escaping trial depends on the election results. In order to ensure he remains prime minister, he will need to find 61 seats to support him from among the right-wing and ultra-Orthodox parties — but without Liberman — so that he can form a coalition that will grant him immunity (in the form of immunity legislation). Until only recently, Shaked remained mum when asked whether she supports immunity for Netanyahu. It may have been part of her efforts to avoid losing seats to the Likud, but on Sept. 2 Shaked was already backing Bennett’s statement that he would not oppose implementing the existing Immunity Law in Netanyahu’s case.

If Netanyahu wins the 61 seats he needs — if right-wing and ultra-Orthodox parties constitute a majority — he will have to negotiate with Shaked and Bennett for them to join his coalition. But such negotiations are not going to be easy: Netanyahu will find himself facing the Shaked and Bennett couple eager for vengeance and more eager than ever to extort him. And so, if he feels he is under duress, Netanyahu might well turn to Blue and White leader Benny Gantz or to the Labor-Gesher party. He will try to convince them to join him if only to get Shaked off her high horse. If this effort fails, he’ll have no choice but to turn back to Shaked and Bennett. In other words, he’ll have to pay dearly for bringing the two politicians he hates most of all into his coalition. In this disastrous situation, he will not be able to get 61 seats without giving himself over to the mercies of these adroit political players.

Just 13 years ago, Shaked and Bennett were two young politicians who admired Netanyahu and worked to help him win back the Prime Minister’s Office. Under these emerging circumstances, they could very well join an effort to bring him down.