Fragments of Israeli rightwing parties gamble on merging ahead of elections

The broken Yamina party and the two-member Derech Eretz party are hoping that their merger will get them into the next Knesset. 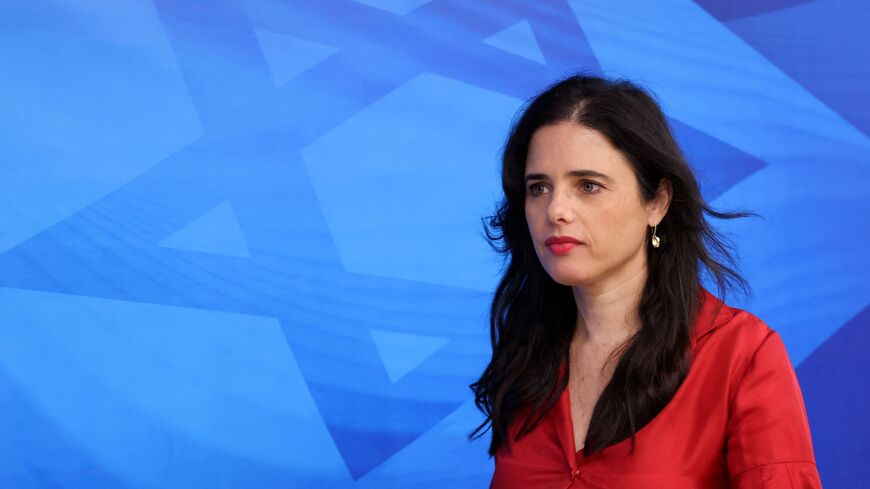 Interior Minister Ayelet Shaked and Communications Minister Yoaz Hendel announced July 28 that their respective parties — Yamina and Derech Eretz — will run together at the upcoming Nov. 1 general elections, under the name "the Zionist Spirit." In recent surveys, Yamina polled bellow the 3.25% Knesset-entry threshold. Shaked hopes that the alliance with Hendel will get both parties into the parliament.

According to a July 24 poll, opposition leader Benjamin Netanyahu’s Likud gets 35 Knesset seats, largely preserving its status as the biggest party in the Knesset. But contrary to the solid Likud, the non-Netanyahu right is shaky. Thus, once again, it is trying to reinvent itself.

In the last three years, several right-wing parties were founded, including Yamina, the New Right, Derech Eretz and New Hope. All were established with great fanfare, only to crash at the polls. None succeeded in achieving real political clout.

This was true also for former Prime Minister Naftali Bennett’s Yamina. Although Bennett served for more than a year as premier, his party never managed to grow in popularity. On the contrary. Resignation of two Yamina members, who preferred to support the opposition, brought about the downfall of the government. These moves were why Bennett decided to not to run at the next elections, handing over the broken Yamina party to Shaked.

A poll published by N12 News shortly after the announcement actually offers the new party some hope. According to this poll, the Zionist Spirit would get four Knesset seats, just enough to enter the parliament, and the Likud gets 33 seats.

Associates of Shaked say that the party will support Netanyahu only if he can establish a clear majority. In other words, if Netanyahu does not get 61 seats for his coalition, they might not join him.

This is a very complex position. Netanyahu will surely try to hurt them politically as much as he can before the elections. He would rather see their votes turned to support either the Likud or the Religious Zionism party, which is loyal to him. If the Zionist Spirit won’t pass the Knesset-entry threshold, many rightwing votes will be wasted.

Netanyahu is the undisputed leader of the right. Some rightwing votes might go to the alliance between Defense Minister Benny Gantz and Justice Minister Gideon Saar, both of whom have committed not to join a Netanyahu government. Still, the vast majority of the right electorate — including the ultra-Orthodox and the far-right parties — will follow Netanyahu.

This makes the situation of Shaked and Hendel delicate. Many rightwing voters see them as political traitors, since they joined the Bennett-Lapidgovernment that came to life solely to topple Netanyahu.

Shaked knows that all too well. At the July 28 press conference, she also referred to Yamina's decision to form a government with the center-left.

"I know that many of you were hurt. A year ago, when the government was formed, we wanted to prevent the madness of fifth election. We were contemplating what was the best thing to do, for the sake of the State of Israel. We believed we can establish a partnership, to address the needs of all the Israeli citizens. We took steps that were risky, publicly and personally, but also offered hope. All that, without giving up on any of the rightwing values," Shaked said.

But, she added, the government was ultimately not successful and "throughout the period something was missing, there was a lack of spirit, a Zionist spirit. Citizens of Israel, today we are bringing back the spirit."

Shaked then said that an Israeli government cannot rely on an Arab party, and that the Zionist enterprise cannot depend on the support of Arab legislators.

When Bennett decided to leave his position, handing over premiership to Lapid, Shaked found herself in a difficult spot. Under other circumstances, she might have preferred joining the Likud for the next elections. Bennett’s decision forced Shaked to stay with a party crumbling and even disappearing. The merger with Hendel was her only way, it seems, to get back public attention, and perhaps public support.

If Shaked’s gamble pays off, she will lead in a very small party the next Knesset. Still, the very volatile balance of power could offer her considerable clout. Netanyahu could find himself once again without a clear majority, in search of one or two more votes that could make the difference.