Prime Minister Benjamin Netanyahu has been laboring for the unification of far-right parties. The announcement of HaBayit HaYehudi and National Union parties on running together is his first victory. 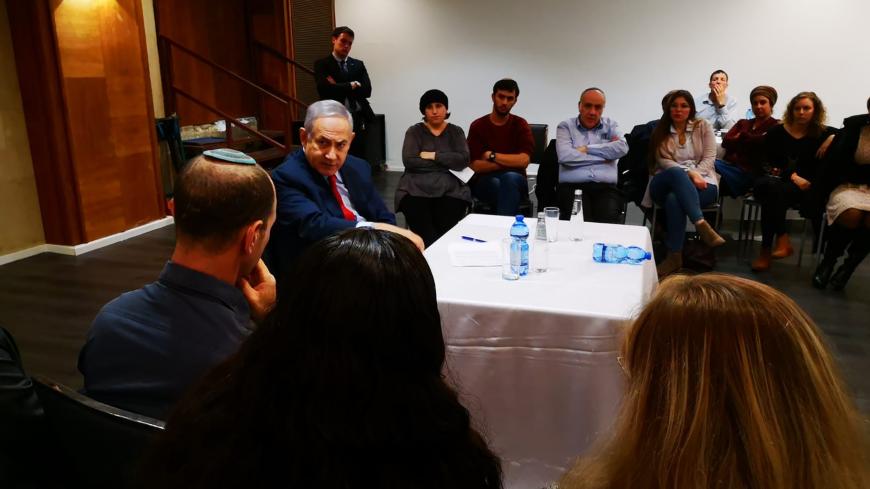 On Feb. 11, a day before he left to attend the Warsaw Summit, Prime Minister Benjamin Netanyahu summoned some 20 influential journalists and bloggers affiliated with Israel’s religious Zionist circles. The meeting was held at the Jerusalem Gardens Hotel near the Prime Minister’s Office, and participants were asked to arrive two hours ahead of time for a security sweep.

At about 7 p.m., Netanyahu walked in and sat down behind a small table covered with a white tablecloth on which a bottle of water had been placed. The guests sat close to him in a semicircle. No recordings or photos were allowed apart from a few photos taken at the beginning of the meeting.

Netanyahu devoted three hours to this off-the-record meeting in order to convey just one message: Absent a union among the splinter groups on the radical right, his right-wing government would lose the April 9 elections.

Various polls, including those Netanyahu commissioned (some of these were not published), indicate that the four extreme right parties will not get the number of votes they need to pass the Knesset-entry threshold of four seats. The Ichud Leumi (National Union) party is stagnant in the polls even after electing Knesset member Bezalel Smotrich to lead it. The same goes for HaBayit HaYehudi, formerly headed by Education Minister Naftali Bennett and Justice Minister Ayelet Shaked and now by the former chief military rabbi Brig. Gen. (res.) Rafi Peretz. The third party is Otzma Leyisrael (Power to Israel), the most radical of them all, led by disciples of nationalist, racist Rabbi Meir Kahane, and the fourth is the Yachad (Together) party, led by the former head of the ultra-Orthodox Shas Party, Eli Yishai. Polls clearly indicate that none of the four will pass the electoral threshold, meaning garner more than 3.25% of the votes needed to get into the Knesset.

According to Netanyahu’s calculations and assessments, a union among the four groups would yield six to eight Knesset seats for the right-wing bloc that he heads, ensure him a majority in the 120-seat legislature and guarantee him a fifth term. In recent weeks, he has brought heavy pressure to bear on the four.

In the early morning hours of Feb. 15, while still in Warsaw with his plane grounded by a mechanical fault, Netanyahu received word that at least one union was in the bag. After exhausting negotiations and ego clashes, Smotrich and Peretz agreed to run together, with Peretz at the head of the union that is now assured of crossing the electoral threshold. Netanyahu’s Likud party was quick to congratulate the two and called on them to hook up with the other forces on the right “to guarantee the right-wing bloc’s election victory.”

Netanyahu will likely ramp up his pressure in the days leading up to the Feb. 21 deadline for submitting the party lists of all candidates running in the elections. He is hoping for a comprehensive unification of the four parties.

Why is Netanyahu so insistent? The prime minister views such a broad union as his safety net. He assumes the Likud under his leadership will garner at the April elections the most Knesset seats, as consistently reflected in the polls, but is worried that a bloc of parties led by former military chief of staff Lt. Gen. (res.) Benny Gantz (head of the Israel Resilience party) could block him, and deprive him of the majority he needs to form a new government. He repeatedly warns in his campaign clips against a scenario in which Gantz aligns with the Arab parties in the Knesset, a baseless prospect but nonetheless one that resonates with some on the right. In fact, Netanyahu is concerned that some on the more moderate right and center-right will jump ship and support Gantz. In addition, he does not entirely trust Bennett, Shaked and the head of the center-right Kulanu Party, Finance Minister Moshe Kahlon, to make good on their promise to support his next government.

Netanyahu believes he is a shoo-in to form Israel’s next government if he can link together all the parties on the radical right. Clearly, neither Smotrich nor Peretz and certainly not Otzma Leyisrael would ever join forces with Gantz. The same goes for the ultra-Orthodox parties that prefer Netanyahu. These parties, if they pass the Knesset threshold, are considered by Netanyahu as valuable partners. Such a constellation is therefore vital to cement his next coalition and guarantee his hold on power.

To what extent does he see such a radical right alliance as a matter of political life or death? One of the participants at the Jerusalem Gardens meeting told Al-Monitor on condition of anonymity: “Netanyahu swept in like a storm. He sounded jittery and upset. He explained that absent a union, Gantz would be the next prime minister and this would be foolhardy on the part of religious Zionism. He kept repeating this. In the end, he even threatened that absent such a union, he would try to take votes away from those parties. He said he does not want to do it, and if they [far-right parties] all unite, they could guarantee their entry into the Knesset. My sense was that he was conveying a message of urgency — that the right-wing government was headed for a fall and we had to help him.”

Netanyahu has not let up his pressure on Smotrich, Peretz and Yishai, and he has also made calls and issued invitations to Otzma Leyisrael stalwarts like Michael Ben-Ari. He courted them ardently, but his underlying tone was threatening. He was supportive, on the one hand, suggesting he might appoint Smotrich and Peretz as ministers in his next government, and in the same breath, he also told them that they would be held responsible for a defeat of the right and would also not be elected to the Knesset.

One of them described to Al-Monitor (on condition of anonymity) the nature of the talks with Netanyahu. “He told me, ‘I have been polling, and the link that works best is between HaBayit HaYehudi, the National Union and Power to Israel. If you go together, this would add six to eight mandates [to the right].'” According to Netanyahu’s interlocutor, the prime minister also said, “The left had set its hopes on the outcome of the police investigations against me. What do they have on me? Nothing. The country is in great shape, so all they have left is the legal issue.” He also quoted Netanyahu as saying his polls indicate the elections will be very close and adding, “So are you nuts? We’ll hand over power to the left? You must understand if we cannot head them off on the right, they will manage to move two or three seats over to them, and then it is all over for us. It’s that simple.”

Netanyahu has no way of knowing how a decision by Attorney General Avichai Mandelblit to indict him on charges of corruption — a decision expected within weeks — will affect the election outcome. In the most pessimistic scenario, his Likud party hemorrhages voters. That is why forming a radical right alliance worth six or eight Knesset seats is of crucial importance.