Prime Minister Benjamin Netanyahu would like the situation to remain as is — with two separate political groupings to the right of the Likud targeting the religious-right constituency — rather than see them come together in a unified, strong religious-right platform. 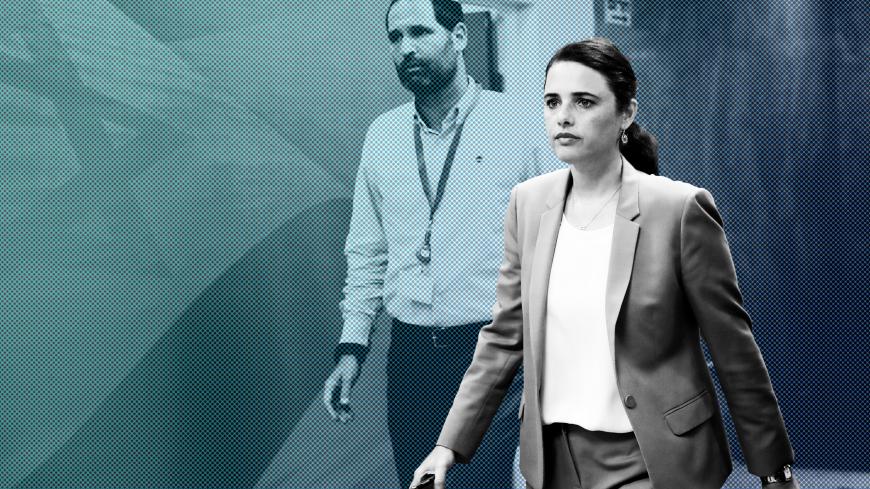 Israeli Justice Minister Ayelet Shaked (R) arrives ahead of the weekly Cabinet meeting at Prime Minister Benjamin Netanyahu's office in Jerusalem, Sept. 12, 2018. Netanyahu fired her from the justice minister's post in June, and she now wants to form a coalition of parties to the right of Netanyahu's Likud. - Thomas Coex/Pool via Reuters

Prime Minister Benjamin Netanyahu is scheduled to leave for Japan and South Korea on July 27. The top headline for his five-day state visit is planned for Seoul, where Israel will sign a historic free trade agreement with South Korea estimated to be worth billions of shekels for the Israeli economy.

The timing of this visit, in the heat of an election campaign, will certainly help cement Netanyahu’s position as a serious statesman, particularly when compared with his rivals. Yet Netanyahu has spent the past two days deciding whether to postpone his trip. The reason is that it means he would be out of the country Aug. 1, the date on which the parties are required to submit their final lists for the Knesset to the election board. The timing is critical for him politically. The prime minister wants to prevent a major merger of all the parties on the right (apart from the Likud) in an initiative led by former Justice Minister Ayelet Shaked, who became head of the New Right party July 21.

Netanyahu has been following this development from a distance, but also from up close. He is concerned by the potential merger of two smaller political groupings to the right of the Likud: the New Right, which mostly appeals to a moderate secular electorate, and a joint religious-nationalist list made up of HaBayit HaYehudi, the National Union and the radical-right Jewish Power, which targets the more religious settler community. According to his own, in-depth polling, the two groupings appeal to different target electorates and would speak for just about everyone to the right of the Likud. He does not want to see them joining forces as a single party, especially since the most recent poll said such a party would win 12 seats. He is particularly unhappy about the idea that Shaked could head such a party. Though she is the former director of his office, she has since become a red flag to those living in the prime minister’s residence.

The result is a fascinating battle that will be Shaked’s big test. Can she succeed in getting the right (apart from the Likud) to consolidate its forces and to appoint her as its leader, potentially delivering a devastating political blow to the prime minister? Or will her efforts be blocked?

Shaked left HaBayit HaYehudi in April, on the eve of the April Knesset election, together with the man who first brought her into politics, Education Minister Naftali Bennett. It was considered an arrogant move, poorly calculated on their part. Though they left a stunned party staggering behind them, their move turned out to be an absolute failure. Bennett and Shaked’s New Right party failed to pass the electoral threshold, while the party they abandoned without looking back actually managed to resuscitate itself. It appointed Rabbi Rafi Peretz to lead it and was again voted into the Knesset.

Battered by their defeat, Bennett and Shaked decided to take a break from politics. The relationship between them had grown tense, so they decided to go their own ways. Shaked, who had been the more popular of the two, felt as if Bennett had dragged her along on a rash adventure, and that this had caused enormous damage to her career.

Once the newly elected Knesset dissolved itself and a fresh round of elections was announced for Sept. 17, Shaked did everything she could to ensure herself a safe slot on the Likud list. Her goal was to join the largest right-wing party as a steppingstone to the Prime Minister’s Office. To achieve this, she used senior Likud officials to speak on her behalf and pave the way to the party, which was considered off-limits to her and Bennett as long as Netanyahu reigned over the Likud. The personal squabble between them and Netanyahu — and with Netanyahu’s wife, Sara — may have dated back a decade, but nonetheless it sealed her fate and kept her out of the party, just as it had in the past. Shaked miscalculated, thinking that this time, Netanyahu would take her popularity into consideration and lift his opposition to her. As one Likud minister told Al-Monitor on condition of anonymity, “Shaked tried to create the false impression that senior members of the Likud wanted her. But why would we? We all know that her goal is to join the Likud and run for leader of the party, on her way to the prime minister’s office.”

While Shaked struggled to get a spot for herself in the Likud, Bennett announced that he would run again with his New Right party, and that he would do it with Shaked or without. Over the last few weeks, Shaked did everything she could to avoid recreating her past partnership with Bennett. Only after she finally realized that the door back to the Likud was hermetically sealed was she willing to renew her dialogue with Bennett. This time, however, she came from a position of power, so negotiations between the two of them went quickly. She demanded and received the position of leader of the party. While Bennett conceded his position to her in a gesture of gracious goodwill, he also knew that there were no other options. He had his chance in April and failed.

Shaked is the only woman currently heading an Israeli political party.

Changes in the New Right’s leadership were quick in coming. The two of them met the night of July 20. By the night of July 21 they announced to the press that Shaked was the new leader of the party. Then, on the morning of July 22, Shaked paid a visit to the West Bank settlement of Efrat. Though Bennett was at her side, now the spotlight was on her. When asked about Netanyahu’s efforts to prevent the merger of the parties to the right of the Likud, she responded, “We live in a democratic state. The people will decide.” It was a show of comfortable self-assurance by Shaked. She had assumed the mantle of leadership with ease.

Shaked’s big test will be a hard-hitting political battle, with all the complexity it entails, against Netanyahu, Israel’s most sophisticated politician. On the one hand, he tends to be derisive of Shaked, but on the other hand, he has come to recognize her popularity, her skills and her adroitness with the media. Over the next few days, she will discover that the next target she has set for herself will not be easy to achieve. Netanyahu has spent the last few months building a close relationship with Peretz and even appointed him education minister. They speak regularly and meet regularly, too.

Netanyahu is pushing full force ahead to prevent the non-Likud right from merging, even in his dealings with the sector’s rabbinical authorities. He is supported by polls showing that the public considers him to be the person best suited to lead the country. This will be his most effective bargaining chip in dealing with influential people on the right. He will tell them that this is the surest way to prevent the left from coming to power.

As such, there is no reason to be impressed by friendly voices coming from the leaders of United Right coalition party — Peretz (leader of HaBayit HaYehudi and leader of this united platform), Transportation Minister Betzalel Smotrich (leader of the National Union) and the leaders of Jewish Power (disciples of Rabbi Meir Kahane) — in support of a merger with Shaked. None of them intends to grant her absolute control over a major party. This is exacerbated by the rabbis’ opposition to having a woman lead a religious party, particularly with the prime minister himself stirring the pot. As far as Netanyahu is concerned, this may be the most important political fight of his life.