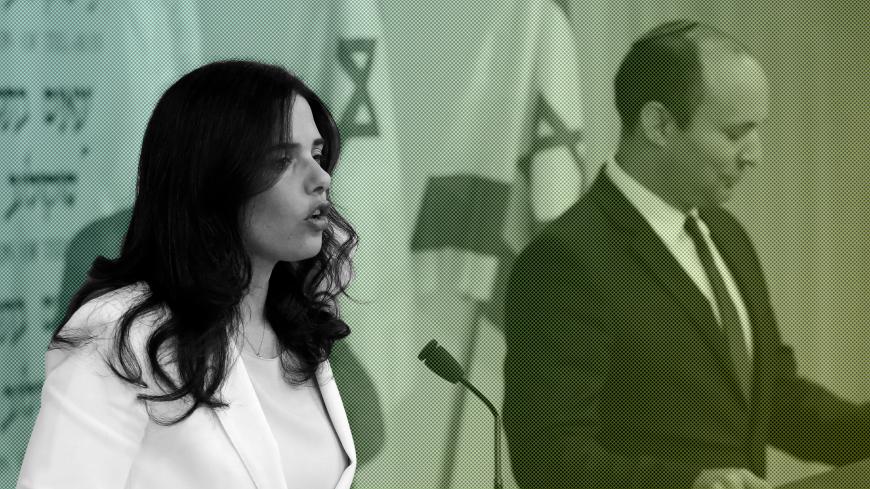 The 1,400 votes that the New Right failed to win in order to pass the electoral threshold in the April 2019 election prevented Prime Minister Benjamin Netanyahu from forming his fifth government. At first, it seemed as if the Netanyahu got everything he wanted in this election. The right-wing, ultra-Orthodox bloc won a stable 65 seats (with Avigdor Liberman’s Yisrael Beitenu party), along with the added bonus that two former advisers whom he despises, Naftali Bennett and Ayelet Shaked, were kept out of the Knesset. Their New Right party did not garner the four Knesset seats needed to make it into the Israeli parliament. But it was all an illusion. While it seemed at first as if his dreams had come true, it turned out to be one big nightmare, and it led to another election campaign — this time even tougher than the last one.

As events unfolded, he brutally fired both Bennett and Shaked from their ministries and blocked Shaked from joining the Likud. Then, on July 29, he suddenly found her at the head of the United Right list, which the polls expect to win 12-13 seats. Shaked’s comeback and her emergence as the strongest woman in politics and, in particular, on the right is also Netanyahu’s failure, especially after he tried to prevent it. He had two reasons for not wanting this consolidation of parties to happen: He did not want Shaked to become too powerful a player on his own playing field, and he believed that it would be best if the parties to the right of the Likud ran in two separate lists.

The bottom line is that Shaked came out more powerful than ever and positioned herself in a great spot to dive into a campaign for prime minister one day. She and Bennett negotiated effectively with HaBayit HaYehudi Chairman and Minister of Education Rafi Peretz, and with the chairman of the National Union party, Minister of Transportation Bezalel Smotrich. In the last few weeks, Peretz has become the “long arm of Balfour Street” — i.e., the prime minister. Nevertheless, when it came to uniting the parties on the right, he (Peretz) gave in to Shaked and stepped down from his leadership position so that she could take over.

And what about Netanyahu? He has been in close touch with Peretz, who provided the prime minister with reports from the negotiating room in real time. Peretz did manage to get a commitment from Bennett and Shaked that they would recommend after the Sept. 17 elections Netanyahu as their candidate for prime minister. What makes this particularly important is that the two of them had been saying that they do not plan to recommend Netanyahu automatically and they could support some other candidate on the right just as easily.

Having checked off this task, Netanyahu is still left with a major headache because of his intense concern that his potential coalition would lose the votes cast for two parties on the far right: Israel Power (Otzma Yehudit) of Itamar Ben Gvir — who will always be remembered as a disciple of Rabbi Meir Kahane and his racist ideology — and Zehut, headed by Moshe Feiglin.

Considering how just 1,400 votes prevented Netanyahu from forming a government last spring, it becomes clear why he believes that each and every vote for the right is critical. The fact that Liberman will not commit to recommending him again and has removed himself from a right-wing, ultra-Orthodox bloc that supports Netanyahu makes every vote more critical. It is why Netanyahu’s most important battle in the current election is to maximize votes on the right. He is doing everything he can to use potential votes on the right to the fullest extent possible so that once the election is over, he will have 61 seats — a majority coalition — without Liberman. In other words, the chairman of Yisrael Beitenu will no longer be able to threaten him. Any other result will not only leave him vulnerable to extortion but also put his ability to form a government at risk as long as he is deemed invalid as a legitimate political partner because of the outstanding criminal cases against him.

Aug. 1 is the deadline for the parties to submit their lists for the next Knesset. Netanyahu will be focused entirely on this. In fact, he even canceled a historic visit to Japan and South Korea so that he can concentrate on this alone. His current objective is to force Shaked to embrace Israel Power and Zehut parties in her United Right list. The problem is that she doesn’t seem interested. In fact, she seems to be playing both sides. Immediately after she joined forces with Smotrich and Peretz, Shaked announced that she would continue in her efforts to join forces with other parties. But there are also rumors coming from her side that the Likud will incorporate Feiglin and Ben Gvir, something that Netanyahu doesn’t want to see happen.

Shaked and Bennett created a party list that even the moderate right could handle. There are four women among its 10 top candidates; Roni Sassover, a secular lawyer from Tel Aviv, appears ninth on the list. They preferred her over former Knesset member Shuli Mualem, who is religious. While they were willing to give Ben Gvir the No. 8 slot, he insisted on being placed fifth and having another member of his own party in the United Right’s top 10.

Meanwhile, Netanyahu is attacking the United Right through a series of statements issued by the Likud. “This unification is completely fictitious if they don’t include all the parties on the right,” one such statement by the Likud claims. “If this is the end of the process, there can be no question that the right-wing bloc is in danger of losing power, particularly with all the Arab parties running as a unified list. Bennett, Shaked and Smotrich intentionally left five or six seats out of their right-wing bloc, but it is not too late to correct this dangerous mistake.”

What this statement really means is that Netanyahu has already launched his “catastrophe arriving!” campaign, warning that without a full religious right unification the left could win the elections. At the same time, he is placing full responsibility for whatever happens on Bennett, Shaked and Smotrich. There is no mention of his current ally, Rabbi Rafi Peretz, anywhere in the statement. The last thing the prime minister wants to do now is offend Peretz, because he is Netanyahu’s insurance policy and the ultimate assurance that Shaked and Bennett will not violate their commitment to recommend him as prime minister. What really worries him is that this is all a ruse.

When it comes to how many seats Feiglin and Ben Gvir are really worth, Netanyahu obviously exaggerated. Current estimates are that their parties, Zehut and Israel Power, are worth about two or three seats on a good day. Actually, that is quite a bit. In the last election, each seat was worth about 32,000 votes. Considering that just 1,400 votes altered the course of Israeli political history, the fact that these parties are worth two or three seats can be dramatic.

Who will be the first to crack? Netanyahu has already announced that he has no plans to reserve places on the Likud list for anybody else (he will not include Israel Power people on his Likud list), meaning that all the pressure now lies with Shaked and Bennett. They were attacked by Feiglin and Ben Gvir in interviews they gave after the consolidation of right-wing parties was announced. Feiglin claims that Shaked left them out of the game intentionally and that she is putting right-wing rule at risk. Ben Gvir was even more scathing, saying, "You can’t take our votes and then push us to the bottom of the list."