Naftali Bennett and Ayelet Shaked thought their New Right party would further their already substantial political success, but instead they find themselves in "total shock" over not surpassing the Knesset vote threshold. 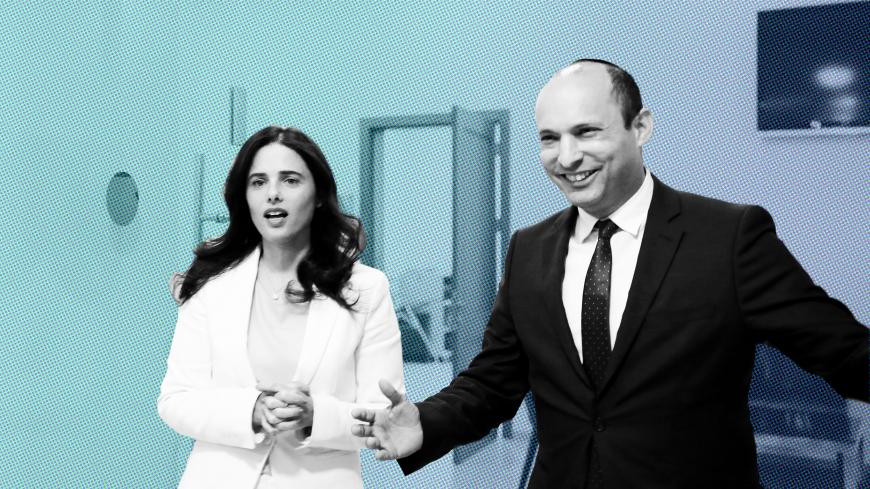 Internal polls commissioned by Naftali Bennett and Ayelet Shaked before they formed the New Right party last December failed to give them the slightest indication that they might fail to pass the vote threshold to enter the Knesset. In fact, the findings seemed to indicate just the opposite. The polls showed that the “Bennett and Shaked” brand had a hardcore base of four seats comprised of ardent supporters who would follow them to whatever party they chose. The general assessment was that they would walk away from the April 9 elections with 8-10 seats. In reality, the New Right suffered a devastating defeat at the ballot box.

There can be no doubt that Shaked and Bennett were the tragic heroes of this past election because they were at the height of their political activism when they fell. They were two hardworking young ministers with an agenda who labored tirelessly at their respective ministries, him at Education and her at Justice. Their seats on the Security Cabinet gave them status and power, and it looked like they would be with us for many long years to come.

People could love or hate their agenda. Quite a few people, including many who admired them, thought that their populist attacks on the judicial system and their calls for a more aggressive campaign in Gaza went too far, forcing supporters of the moderate right in the Likud to adopt more extreme positions. To their credit, however, it must be said that they were active politicians and were untainted by the slightest whiff of corruption. Based on reactions on social media, even their critics regret their departure, as they evoked interest, adding color to Israeli political life, and had no qualms about challenging the system.

It was Bennett who spearheaded the initiative to form the New Right. Shaked had had reservations. She was concerned that leaving their home party, HaBayit HaYehudi, to strike out on their own might be too risky. Bennett, however, insisted. He wanted to push forward, full steam ahead, on an independent path that would lead him to the Prime Minister’s Office, and he wanted to do it without being held to account by the rabbinic leadership of HaBayit HaYehudi.

In the end, Shaked did what she has always done throughout the years of her political partnership with Bennett. She gave him the backing he wanted in the hope that the magic would spill over to their new party.

There has indeed been some magic. Almost everything they touched after they burst into public life has been a major success. They were both young high-tech entrepreneurs who left their private businesses in 2006 to work with Benjamin Netanyahu, then-leader of the opposition, because they believed in his vision.

Bennett was the more prominent of the duo. He was a religious veteran of the Israel Defense Forces Matkal commando unit who got rich from a startup. After he and Shaked got into a fight with the prime minister’s wife, Sara Netanyahu, they were forced to leave their posts in his office in 2008. They remained politically active, however, but in different ways.

In 2010, they founded My Israel, a right-wing non-profit that described itself as a national camp movement to promote Zionism. Their activities included an attempt to instigate a revolution in the public media discourse, which they claimed discriminated against the right. They were also among the first in Israel to grasp the power of social networks, which they used to their advantage. In 2011, they launched one of their most successful public campaigns, against Army Radio. Its slogan was blunt: “Army Radio: A Knife in the Back of Our Troops.” Still, it turned out that there was an audience, or rather, that they knew how to shape public opinion. This was long before the Likud recognized the potential inherent in attacking Army Radio by labeling it the station of “Tel Aviv leftists.”

The same thing happened when Bennett and Shaked threw their support behind the social justice protests in the summer of 2011. Bennett succeeded in challenging the existing order. He was a right-wing figure who served as secretary-general of the settlers' Yesha Council, but he also sided with the young people of Tel Aviv in their socioeconomic struggle. He and Shaked began to soar in the polls. They wanted to enter politics, but the Likud was not an option for them, and it would remain forbidden territory as long as Netanyahu dominated the party. Once again, Bennett showed resilience and creativity in seeking another political platform and finding it in the national-religious HaBayit HaYehudi, a party long past its prime.

Bennett and Shaked took control of HaBayit HaYehudi in 2012 without a fight. It was a brilliant political move. A few months later, after the 2013 elections, Bennett headed the party which had won 12 Knesset seats. His next political move was surprising. He joined forces with Yair Lapid, the star of the 2013 elections, whose Yesh Atid won 19 seats. Bennett and Lapid forged a political alliance, forcing Netanyahu to deny the ultra-Orthodox parties a place in the governing coalition.

While HaBayit HaYehudi fell victim to Netanyahu’s “vote stealing” tactics in the 2015 elections, winning just eight seats, its leaders knew how to make the most of that outcome. Despite HaBayit HaYehudi's vote deficit, Bennett and Shaked soon reached the height of their influence because Netanyahu needed their support. Thus, Bennett was appointed minister of education, while Shaked, not yet forty, led the prestigious Justice Ministry.

In the subsequent four years, Shaked emerged as the real star. Polls showed her to be the most popular politician in Israel, after Netanyahu. If there was tension between Bennett and Shaked, they managed to hide it. Their friendship remained intact. Bennett tried to boost his reputation as a security hawk, challenging the military leadership in Cabinet meetings, as he did on the issue of Hamas' tunnels in Gaza. Shaked became the most powerful woman in the justice system, shaking up the existing order in her very thorough manner and standing up to leadership claiming to represent the “rule of law.”

Shaked gained strength by pushing ahead with an agenda to create a conservative judicial system and limit the power of the Supreme Court. She and Bennett presented their constitutional revolution as an integral part of both of their agendas, proving once again how honed their political instincts were. Many in the Likud adopted their rhetoric, which was, until then, considered extreme. They transformed the debate between right and left to include much more than the occupied territories and the settlements.

A poll published by Maariv in July 2018 found that if Shaked were the head of the Likud, it would win 33 seats, that is, just as many as it would under Netanyahu. This was further evidence that as far as Shaked was concerned, the sky was the limit.

Bennett and Shaked's decision to abandon the party that had given them a home turned out to be arrogant and a mistake. An erratic campaign and a slew of votes stolen from them by Zehut, led by Moshe Feiglin, kept them out of the Knesset. “Total shock” is how one person who knows them both described the way they feel. “What happened to them was a wreck,” the person said, speaking on the condition of anonymity.

It looks for now like the political partnership between Bennett and Shaked has come to its end. Shaked is apparently poised to join the Likud in an attempt to secure a position of influence. According to Knesset member and former coalition chairman David Bitan, she would be very welcome.