Who stands in the way of Israel’s Shaked premiership?

Former Justice Minister Ayelet Shaked did not make it to the Knesset in the April elections, yet her high popularity generates several proposals for running in the September vote. 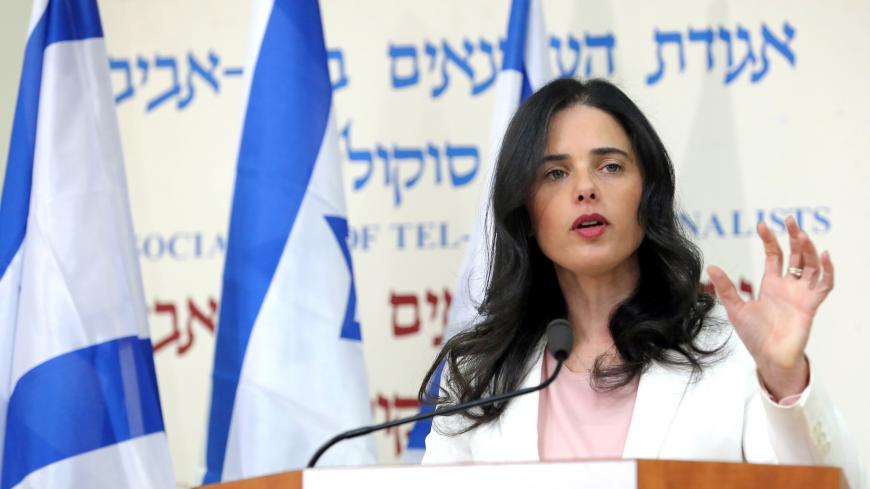 She was the wunderkind of Israeli politics. Just on the other side of 40, she was already being tagged as a future female prime minister, the second in Israel’s history. Ayelet Shaked, who served as Israel’s justice minister for the past four years, was sharp as a knife. She shook up Israel’s judiciary, moving it sharply to the right without paying a public or political price.

Shaked melted the hearts of her ideological enemies, and successfully maneuvered two chief justices of the Supreme Court — the incumbent Esther Hayut and her predecessor Miriam Naor. Her photo graced the covers of dozens of magazines, websites and newspapers. She became a fashion icon and her path to the top of Israel’s politics appeared assured. Almost without anyone noticing, in her popularity she overtook her veteran partner and leader of their joint party, Naftali Bennett. When the two decided in December 2018 to break away from HaBayit HaYehudi, they formed the New Right party and led it as co-chairs. Contrary to their positioning in HaBayit HaYehudi, Bennett was no longer first, with Shaked second. Both were in the pilot’s seat and the sky seemed the limit.

This all came crashing down on April 9, when the New Right failed to get sufficient votes to make it into the Knesset. Shaked, dragged by Bennett into the breakup with HaBayit HaYehudi, became an overnight has-been.

On June 2, Prime Minister Benjamin Netanyahu fired Bennett and Shaked from his transitional government, in which Bennett served as education minister. Netanyahu wanted to neutralize the threat posed by this duo ahead of the Sept. 17 elections. He sought to ensure that if the two vie once again for the support of the right-wing electorate, they would not do so from their ministerial perches.

Shaked must now make a crucial decision for her future. Her takeoff has been aborted, but she has not crashed — yet. She is still popular. In a farewell event at the Justice Ministry this week, Shaked pledged, “I definitively plan on returning.” Now she has to chart her course back.

Other than a handful of top Likud party figures who fear for their jobs, almost all the Likud Knesset members and ministers would like to see Netanyahu promise Shaked a secure position in the Likud’s top echelons and crown her Israel’s future justice minister. Almost everyone understands that Shaked is an electoral asset for the Likud on the eve of renewed elections. Since she is not religious, the Likud is her natural home rather than HaBayit HaYehudi, which was predominantly religious. The only obstacle in her way to launching a new career from a front-row seat in the ruling party is the prime minister’s wife, Sara Netanyahu.

An ocean of very bad blood lies between Mrs. Netanyahu and Bennett and Shaked, ever since they served as top Netanyahu aides while he was head of the opposition in the last decade. She swore to bury them politically, sending them flying from his office on an ejection seat from hell when she found out her husband had paid them with family funds (he paid their salaries himself) and they had tried to downplay her influence over him. Having been booted out, Shaked and Bennett breathed life into the skeleton of the historic National Religious Party, by then a dim memory of its heyday, and to turn it into what became HaBayit HaYehudi. When Bennett and Shaked broke away from the party, HaBayit HaYehudi allied itself with other parties to the right of the Likud that support Netanyahu.

Now, Shaked is free to lead. Her dream of securing a seat at the top of the Likud is within reach. “If it were up to Netanyahu himself, this would have happened,” a top Likud official told Al-Monitor on condition of anonymity. “The problem is Netanyahu knows Sara will make his life hell if that happens and he has no choice but to give in.” On June 2, Channel 13 News reported that a few days earlier Mrs. Netanyahu had stormed into a discussion of the issue held at the prime minister’s residence, told off her husband and announced, "Ayelet Shaked will not be in the Likud. Period." The matter was set aside, for now, although at least two Likud Knesset members — Yoav Kisch and Miki Zohar — said in interviews in recent days that this is not the last word on the subject.

Shaked has interesting alternatives. Bennett has been pleading with her to restore their past partnership, relaunch the New Right, gear up for the September elections and gain enough votes to be elected to the Knesset. Former Foreign and Defense Minister Avigdor Liberman would be happy to have her as his No. 2 in the secular, right-wing Yisrael Beitenu party and is willing to promise her the moon. Another possibility is the formation of a new party that would pull together most of the forces to the right of the Likud. These would include the relatively moderate members of the United Right alliance led by Rabbi Rafi Peretz, the libertarian right-wing Zehut party of Moshe Feiglin that failed to cross the electoral threshold in the April elections, too, Bennet and additional pillars of the right. This scenario would have Shaked leading the pack.

Shaked faces tough choices. She could also ignore Mrs. Netanyahu’s veto and register as a rank-and-file Likud member. The party’s bylaws would allow her to run for a top slot in the Likud primaries within three years of joining and she would not need any favors to reach the top. However, by signing up for the Likud, Shaked would be precluding her other options and would have to pay her dues on the sidelines until her time comes to bat. She will also have to hope that by then, the Netanyahu family would be gone and thus unable to torpedo her rise.

After the humiliating April election defeat, Shaked had a comfortable future lined up for herself. She had come to politics from the world of high-tech and meant to go back there. She received tempting offers from medical marijuana companies and other topflight firms. She planned to take it easy for a few years, make money, travel the globe and plan her comeback. This all fell by the wayside with the scheduling of new elections in September. All she has to do now is decide.