Rivals from within the Likud Party and leaders of other coalition partners are already preparing for the moment Prime Minister Benjamin Netanyahu will have to step down. 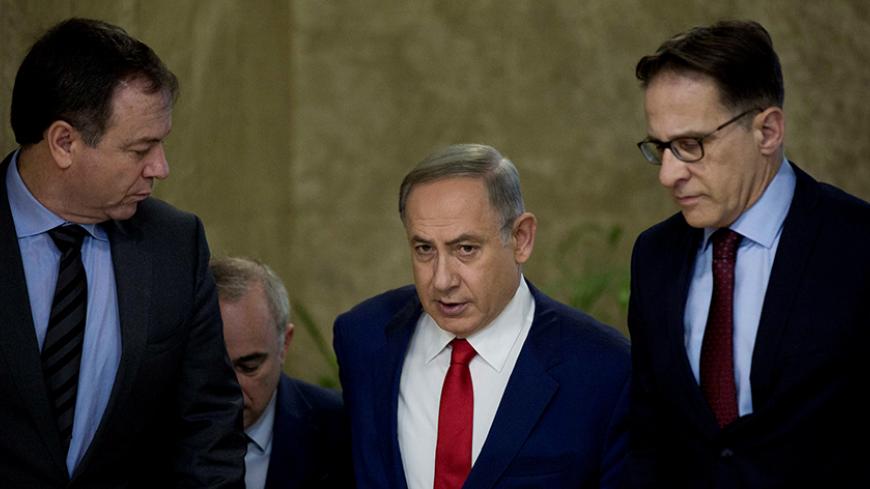 Until two months ago, Israeli Prime Minister Benjamin Netanyahu seemed unbeatable. Then, police accelerated investigations against him. If indicted, he could actually vanish from the political scene abruptly. And so, even if it is not at all certain whether Netanyahu will be indicted, his unstable political situation has provoked potential heirs within the Likud and right-wing camp rivals to quietly start preparing for the day the Netanyahu era comes to an end.

Netanyahu’s rivals all share the same working assumption that the right will stay in power, and so the leader of the right will be Israel's next prime minister. The exciting succession battle that is fought right now will reshape the right-wing camp, since Netanyahu has no natural heir. For the most part, the leadership of the right has long been in the image of a single man (Netanyahu), who made sure to eliminate his rivals and sideline his party's most upper echelons.

Senior Likud ministers such as Yisrael Katz and Gilad Erdan may picture themselves as competing for who will take over from Netanyahu, but they would not dare do anything to bring down the prime minister. This grants Netanyahu a modicum of in-house peace and quiet. Outside the party, however, the whir of activity is causing more of a commotion. Former Defense Minister Moshe Ya'alon is preparing to create a new right-wing nationalist party with himself as its leader, all in keeping with the plan he laid out when he quit the government on May 20, 2016, and announced that he intends to run for leader of the country. Former Minister Gideon Saar is also whetting his own swords for the day after. According to indications, he plans to run for prime minister from within the Likud.

The leaders of two sectoral parties that are members of the ruling coalition have also been keeping their eyes on the prize, hoping to become leader of the Likud in the next election. The first is the chairman of Yisrael Beitenu, Defense Minister Avigdor Liberman. The second is Education Minister Naftali Bennett, the chairman of HaBayit HaYehudi. The big difference between them is that while Liberman may be keeping a close eye on events, he is also backing Netanyahu wholeheartedly, mainly because the Defense Ministry has been very good to him, so he hopes to serve there for as long as possible. Bennett, on the other hand, is already piecing together the strategy that will lead him to the prime minister’s residence. Both men are fully aware that they cannot compete for leadership of the right from a sectoral party: a party of Russian immigrants in the case of Liberman, and a party on the far right in the case of Bennett. That is why the only path for them to achieve their goal passes through the foremost party on the right — the Likud.

Based on press briefings from Bennett over the past few days, culminating in a report on Channel 2 on Feb. 3, Bennett is moving full steam ahead with his plans for the day after Netanyahu. His strategy involves two stages. The first is toning down the extremist image of his party, fostered by Agriculture Minister Uri Ariel and Knesset members Betzalel Smotrich and Motti Yogev; the three of them serve as the settlers' lobby in the Knesset. Then, after reshaping his party’s image as more moderate, Bennett will spearhead a move to have it join the Likud. Once the Likud is turned into a large Republican-style party, he could compete for the party's leadership.

Bennett has also been backing Netanyahu, publicly at least. He has come out with statements such as "You don't bring down a prime minister over cigars." As someone familiar with the Likud's inner workings from the time he served as Netanyahu's chief of staff (2006-2008), Bennett knows that any vocal opposition to the prime minister on his part will cause him enormous damage among Likud voters. He certainly wants to avoid that. But more than anything, Bennett is taking every possible precaution to steer clear of the possibility that he will be the one to bring down the right-wing government. He knows that right-wing voters would never forgive him for such a move. That is why he will continue to embrace Netanyahu in a tight "bear hug," at least in the near future.

Bennett's plan relies on two polls that were released over the past few weeks, in the shadow of the investigation into Netanyahu's dealings. One poll published by the Jerusalem Post on Jan. 15 placed him second after Yesh Atid Chair Yair Lapid as fit to serve as prime minister in the post-Netanyahu era, followed by Saar, Ya'alon and Liberman. The poll also shows that Bennett is the preferred candidate for prime minister among Likud supporters.

The second poll, published by Maariv on Jan. 20, is also encouraging for Bennett. In the scenario that it proposed — a future competition between Bennett as head of the Likud and Lapid — Bennett would win 29 seats, while Lapid would win 27. At the same time, the poll also asked who would win in an election between Netanyahu and Lapid. Those results name the chairman of Yesh Atid the winner with 26 seats, as opposed to the prime minister's 23 seats. What is interesting about these two scenarios is that the political system has gotten used to the idea that the right-wing candidate for prime minister will compete against Lapid; in other words, this is even more bad news for the Zionist Camp and its leader, Isaac Herzog.

The bottom line is that to be elected prime minister, Bennett would first have to be head of the Likud. The problem is that the chances of that happening are slim. HaBayit HaYehudi is still a party run by independent institutions and mechanisms. It is not entirely under his control, as is the case with the various one-man parties, such as Yesh Atid. As a result, any process to bring about structural change within the party will inevitably be complicated.

The biggest obstacle Bennett faces, however, is undoubtedly within the Likud itself. He would be forced to compete against powerful forces within the party, such as Katz, Erdan and Saar. They have the advantage of being part of the Likud's own flesh and blood, rather than some foreign implant such as Bennett.

On the other hand, a source close to Bennett told Al-Monitor on condition of anonymity, "True. The succession war after Netanyahu would be a bitter one, but the Likud wants to stay in power. If the polls show that only Bennett can defeat Lapid, the whole picture will change."

In response to this, one leading Likud minister has been throwing cold water on Bennett's enthusiasm, putting his plans into proportion. In a conversation with Al-Monitor, the Likud minister said on condition of anonymity, "Bennett must live in a parallel universe. First of all, we can see that Netanyahu isn't going anywhere so fast, and even when he does go, no one here is waiting for Bennett. If he thinks that Yisrael [Katz], Gilad [Erdan] or Gideon Saar will let him in, he is making a big mistake. If anything, they feel closer to Liberman."