Is this Netanyahu's last political fight?

The Likud election campaign will reveal a party much different than that of former elections, having turned from a liberal-right party anchored in development towns, into a hub of the settlers. 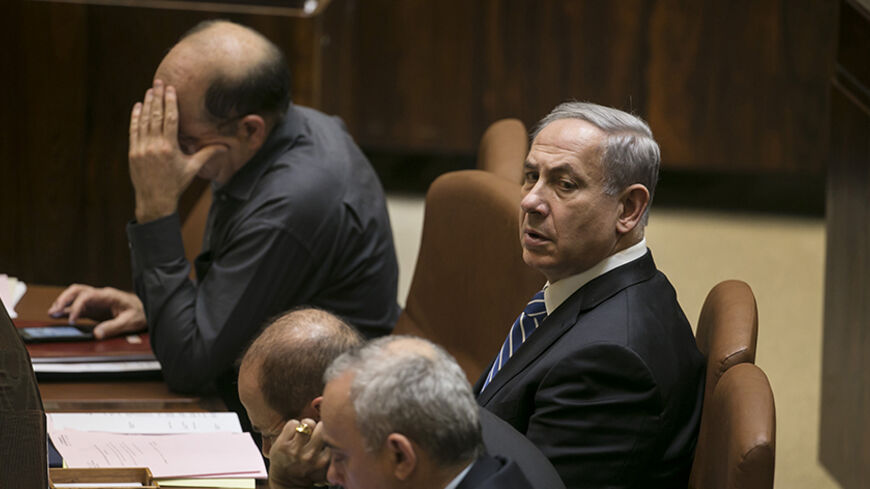 On Dec. 8, just a few hours before the 19th Knesset voted on its premature dissolution, Prime Minister Benjamin Netanyahu entered — perhaps for the last time in his capacity as premier — the spacious conference room of the Likud faction in the Knesset.

It was a particularly tense weekend for Netanyahu, following his failure to persuade Foreign Minister Avigdor Liberman to agree to the introduction into the government of the ultra-Orthodox — a move by which Netanyahu sought to stop in its tracks the galloping election train, which he perceived all of a sudden as destructive and menacing.

The anti-Bibi buzz, which swept the political establishment and the media lately, gaining momentum in the last few days, has further deepened the prime minister's gloom. Anyone who happened to talk with him over the last weekend — and there were quite a few — could tell that Netanyahu seemed to be stressed and frantic, and repeatedly changed his instructions and plans of action, until the wee hours of the night.

The survey broadcast Dec. 8 on the Knesset Channel, which forecast 23 seats for the emerging united party of Labor Chairman Yitzhak Herzog and Hatnua leader Tzipi Livni — as against only 21 seats for the Netanyahu-led Likud Party — has probably intensified the sense of loss of control the prime minister is experiencing at the moment. And, of course, there are all those other surveys, which point to the cumulative erosion in Netanyahu's public standing and the declining percentages of support for his candidacy for the premiership. That kind of support, which Netanyahu enjoyed in recent years, has been his main strength in relation to any other candidate. Now, this safety net of his is threatening to tear apart.

But even as Netanyahu stepped into the conference room on Dec. 8, heading for his customary place at the head of the round table, at the heart of his political home, he could find no real consolation. Instead, he met with the gray and gloomy faces of his party colleagues, reflecting the sense of impending defeat. Most conspicuous was Defense Minister Moshe (Bogie) Ya'alon, who had loyally clung to Netanyahu, only to hear in the last few days that, behind his back, the prime minister promised the defense portfolio to Economy and Trade Minister Naftali Bennett, in return for the future support of HaBayit HaYehudi Party for a coalition headed by Netanyahu. And while Netanyahu strongly denied it in a meeting initiated by Ya'alon, the bad taste was still there, and doubt has already been planted. What’s more, Netanyahu made it clear that he could not guarantee Ya'alon the defense portfolio following the elections.

Thus, once the media was out and Netanyahu turned to his faction members and asked them to refrain from internal conflicts and focus on attacking their opponents from without, Minister of Internal Affairs Gilad Erdan ironically wondered precisely how Netanyahu expected them to do so when the prime minister’s office did not bother to brief and update them. Netanyahu listened, promised to take note of the criticism, and appealed to his faction members to go out and applaud the plan he had pulled out that morning to lower the VAT on basic consumer products.

However, all those present at the meeting know Netanyahu inside and out, and are closely acquainted with the whole range of his masquerades, promises, wooing maneuvers, zigzagging and paranoia. Therefore, no one believed that now, of all times, the prime minister would consult with his senior ministers or share his plans with them. Erdan, Ya'alon and Minister of Transportation Yisrael Katz — all three, top-ranking Likud figures — are already preparing behind closed doors for the day-after, post-Netanyahu scenario, and intend to run for the Likud leadership. In fact, former Interior Minister Gideon Saar, who has just handed in his notice, is considering — in an almost unprecedented move — to make a comeback, only to run against Netanyahu in the primaries for the Likud leadership. Those familiar with the internal Likud codes know that under the elementary rule, an incumbent prime minister won't be deposed before parliamentary elections. Thus, it seems that Saar will stay at home this time around. Be that as it may, it reflects the deep alienation from the prime minister within his own party on the eve of the elections.

Back to the meeting at the Likud faction conference room on Dec. 8. Only about two years ago, just before the dissolution of the 18th Knesset, this same conference room was packed with esteemed public figures — among them, Likud’s “princes” Dan Meridor and Benny Begin, and up-and-coming young ministers Kahlon and Saar, who granted Likud an appeal of a socially-minded centrist party with a rightist tinge, and thus helped Netanyahu to return to power in the 2009 elections.

While Meridor and Begin were removed from the Likud list by the extreme right wing, which had taken over the party, the popular Kahlon and Saar voluntarily walked out, having been embittered by Netanyahu’s political maneuvers. These days, they are going around full of revenge. The two resigning ministers were joined on Dec. 8 — just before the dissolution of the Knesset — by Minister of Culture and Sport Limor Livnat, and it deepened even more the air of abandonment of a sinking ship. Livnat’s withdrawal from the government is yet another indication of the radicalization the Netanyahu-led Likud has been undergoing in recent years, and of the extremist rightist character the once-liberal centrist party has assumed.

On the day the Knesset was dissolved, the overall prevailing impression was that Netanyahu was all alone in his self-imposed campaign, like a king without a kingdom heading for his political demise. All at once, he found himself faced with all his fears and all his foes — and they are numerous and very real: Finance Minister Yair Lapid and Justice Minister Tzipi Livni, who were humiliated by him, have not missed an opportunity since they were fired by him to punch him and to expose behind-the-scenes secrets that, at best, put him in a ridiculous light, and, at worst, show him as an irresponsible prime minister lacking any sense of judgment. At the same time, Liberman and Kahlon, who hold his political fate in their hands, have joined forces against him, and if they decide to ally with the left-center bloc, they may well determine his verdict — to his calamity.

This time, it’s not the notorious paranoia of the prime minister, but rather an exceptionally laden map of threats.

The threats from without aside, the biggest problem Netanyahu is facing is the deep crisis the Likud Party is in, torn by the acrimonious conflict at the top, which is expected to escalate even further. It’s a party that has turned in recent years from the party of the development towns and the well-to-do liberal right-wing constituency into the party of the settlers. Setting out for battle against the better part of the political establishment, with a polarized, conflict-ridden party, is a particularly challenging mission — even for a master of politics like Netanyahu.