Why Ya'alon's departure from Defense Ministry should worry Bibi

The resignation of Defense Minister Moshe Ya'alon from his post following the appointment of Avigdor Liberman to his job leaves the Likud party without any moderate senior figures. 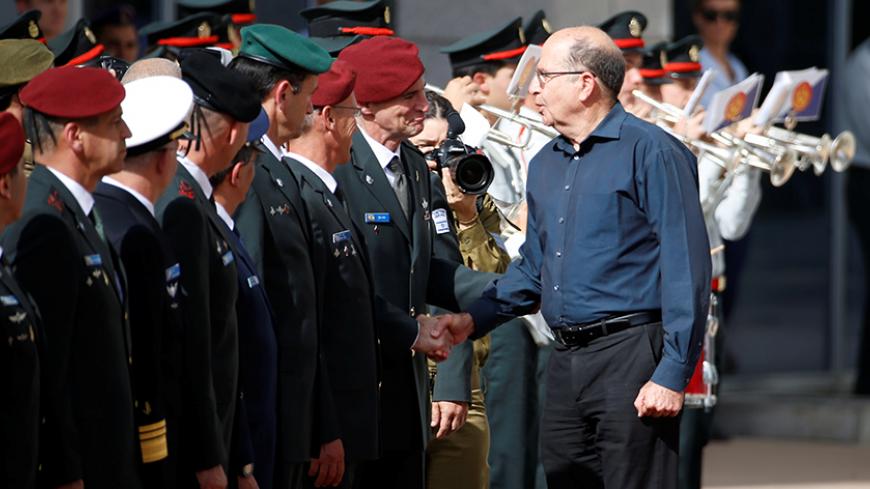 When Prime Minister Benjamin Netanyahu recruited Lt. Gen. Moshe (Bogie) Ya'alon to the Likud on the eve of the 2009 elections, he was chairman of the parliamentary opposition and seeking to portray his right-wing party as moderate and pragmatic.

Netanyahu, who was running for prime minister at the time, invested tremendous effort into shaking off the extremist image with which the Likud had been associated after party rebels opposed to the Israeli 2005 pullout from Gaza caused Prime Minister Ariel Sharon to split and establish the Kadima Party.

Ya'alon was a former chief of staff, a kibbutz member raised on the left-leaning values of the erstwhile Mapai (the precursor of Labor) but disillusioned by the Oslo Accord. He, along with the scions of Likud leaders known as the “princes” — Dan Meridor and Benny Begin, sons of the pre-state underground Irgun leaders — was courted assiduously by Netanyahu in an effort to convey an image of the Likud leadership as responsible, value-driven and liberal.

Over the years, Ya'alon became an accepted and admired figure in the Likud. He managed to build up a political base and worked hard to maintain the support of activists. He was considered a hawk on diplomacy and the darling of the settlers and the right — until he was tapped as minister of defense and his adherents realized that he favors the rule of law over turning a blind eye to violations in the settlements. In recent months, Ya'alon became a veritable punching bag for the right, including the Likud itself, which has grown increasingly radicalized. Things came to a head when an Israeli soldier shot dead a wounded Palestinian attacker in Hebron on March 24, and the alliance between Ya'alon and the prime minister began to unravel.

Not only did Ya'alon find himself exposed to the evil winds blowing from the extreme right, the prime minister was closing ranks with this unruly sector. He chose the side of popular support for the soldier over the Israel Defense Forces and its commanders, who condemned the shooting. Ya'alon’s political blood had been let.

The seeds of his dismissal and replacement by Yisrael Beitenu chair Avigdor Liberman had been planted. In fact, Netanyahu totally abandoned the strategy that had guided him — right wing and defense centered in nature but with an appeal to voters in the center and moderate right as well. In the short term, by firing the “leftist” Ya'alon and appointing Liberman instead, he benefits both from a more stable coalition government (boosted by the five Knesset members of Liberman’s party) and the praise of the right. But in the long run, this move could have dire consequences for him.

Netanyahu took a huge gamble because Ya'alon’s departure stamps the Likud officially as an extreme right-wing party very similar to HaBayit HaYehudi, chaired by Naftali Bennett. Moshe Ya'alon, Dan Meridor, Finance Minister Moshe Kahlon and Gideon Saar were all considered liberal, moderate and stately Likud figures. Absent these leading members — who quit the party in recent years — the current Likud leadership is to a large extent focused on the extreme right and the settlers. In other words, the Likud is becoming less attractive to those who identify as “soft” right. In fact, Netanyahu will find himself now vying for the same pool of voters with Bennet and Liberman — the hard-core right, the settlers and the radicals.

In naming Liberman as defense minister, Netanyahu brought the chairman of Yisrael Beitenu back to center stage, made him publicly relevant and strengthened him politically. From now on, Netanyahu will find himself with a tense Security Cabinet, hemmed in on both sides by his greatest rivals for the future leadership of the right: Bennett and Liberman. Both, at least in their declarations, are far more militant than he on burning defense-related issues such as Gaza.

That’s what Ya'alon meant when he said in his May 20 resignation announcement to the media, “To my great regret, extremist and dangerous forces have taken over Israel and the Likud movement and are destabilizing our home and threatening to harm its inhabitants. This is not the Likud I joined — the Likud of Ze’ev Jabotinsky and Menachem Begin — and it is appropriate that the decisive majority of Likud voters … understands the depth of the crisis and the recklessness of this spirit that is taking over the movement.” Ya'alon almost certainly isn’t planning a lengthy timeout from politics, but he is unlikely to continue operating within the Likud after what he said about a party that has grown radicalized and has taken out a contract on Ya'alon’s political life.

Ya'alon’s decision to quit and end his humiliation by the prime minister rather than waiting to be offered the job of foreign minister has completely turned things around for him. From the position of a dismissed and humiliated defense minister waiting for a consolation prize in the Foreign Ministry, he took the initiative and stepped down, informing Netanyahu that he no longer has faith in him.

Now Ya'alon is the hottest political commodity on the shelf of centrist politics. Netanyahu is now an enemy, and Ya'alon is tremendously motivated to replace him or to join a political initiative that will push him out. Ya'alon is seeking a right-wing political home but won't accept an unruly, radical one controlled by the settlers.

Ironically, Ya'alon regarded the Likud as home. He learned to love the party activists, toured their bastions and put a lot of effort into building up an infrastructure for the post-Netanyahu era up until the very last days. But then he understood that the evil forces that had climbed to the top of the party and taken its leader captive were also strenuously pushing him away and out. Ya'alon can console himself with the fact that his departure leaves Netanyahu to bicker with Bennett and Liberman over the votes of the right, a finite electoral reservoir. Will he hook up with the centrist Yesh Atid's Yair Lapid? Will he establish a new political platform with Likud renegades Saar and Kahlon? In any scenario, Ya'alon, as a right-wing, hawkish ideologist, holds a strong appeal for the sane, liberal right of what was once the Likud.