With the Likud veering toward the radical right, Israeli Defense Minister Moshe Ya'alon might be tempted to leave in favor of a moderate-right party. 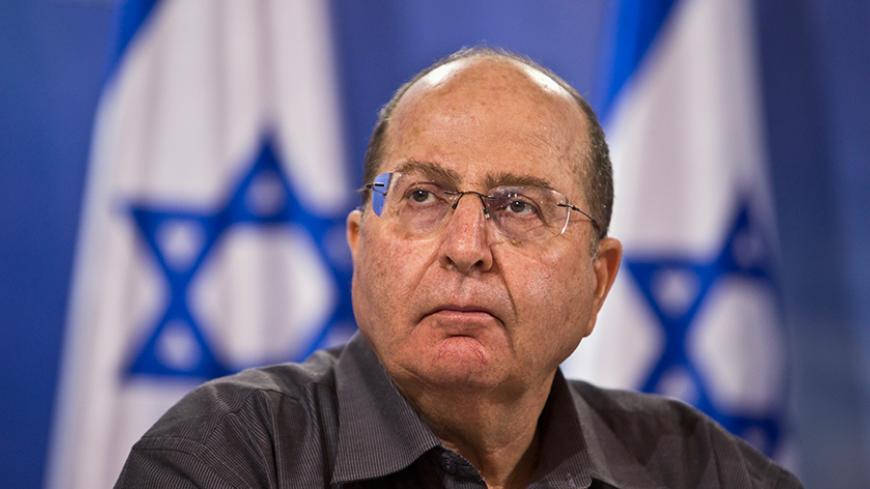 Israeli Defense Minister Moshe (Bogie) Ya’alon had been part and parcel of the historic Labor movement: He was born in the “Red” (Labor bastion) Kiryat Haim suburb, was a cadet in the HaNoar HaOved VeHalomed Labor Zionist youth movement and afterward joined a kibbutz. Only at a relatively late stage, after he was appointed head of the Israel Defense Forces (IDF) Military Intelligence, did Ya’alon undergo an ideological reversal. He changed his outlook, took a turn to the right and joined the Likud after he retired from the IDF in 2005.

Ya’alon’s journey from the hub of the historic Mapai Party (mother party of Israeli Labor) to the Likud center was described in an Al-Monitor article in August 2014. The question now is whether this journey has played itself out and whether Ya’alon is now planning to make his way back.

On April 8-9, on the heels of a wave of unprecedented incitement against him in the ranks of the radical right and among Likud activists, speculations were heard in the political corridors regarding Ya’alon’s political future. An image that appeared on the social networks showed Ya’alon’s face through the scope of a rifle. Anonymous activists from the ruling party were quoted as swearing to eliminate Ya’alon politically, on the heels of the March 24 affair of the Israeli soldier who shot and killed a neutralized terrorist in Hebron, in front of a B’Tselem activist camera (and Ya'alon's decision to indict the shooter).

“He [Ya'alon] has no future in the Likud,” a political source told Al-Monitor on condition of anonymity. But Ya'alon himself, known to be obstinate, has not folded under pressure. He sticks to his guns, and supports the IDF and Chief of Staff Gadi Eizenkot in the immediate action taken against the soldier and the decision to transfer the case for a criminal investigation.

According to associates of Ya'alon, the minister has expressed his disappointment over foreign elements who, he says, have penetrated the ruling party of which he is a member. He is frustrated by the changing values in the central backbone of the party, and by the inflammatory public discourse. Talking at an event on April 5, Ya’alon emphasized that “directives on when to open fire will be determined by the chief of staff, not heads of gangs.”

For quite a few days, Ya’alon was almost alone in this position. The behavior of Prime Minister Benjamin Netanyahu was quite interesting: He waited at least two days before feebly backing up his defense minister. In this affair, Netanyahu is characteristically speaking out of both sides of his mouth: On March 24, the day that the incident took place in Hebron, Netanyahu acceded to Ya’alon’s request and issued a strongly worded condemnation against the soldier’s act. Two days later, when he understood that the overwhelming majority of the Israeli public supported the soldier, Netanyahu did an about-face and set himself up as a kind of arbitrator between the soldier and the IDF, Ya’alon and Eizenkot.

Netanyahu cannot allow himself to oppose the right, which is the sector that voted for him in droves and kept him in power in 2015. But for Ya’alon, the good of the state takes precedence over all. At this stage, Ya'alon is restraining himself and not expressing an opinion over Netanyahu’s zigzag. “I confine these issues to conversations between myself and the prime minister,” he said, according to an associate of his who spoke to Al-Monitor on condition of anonymity. But anyone who is really familiar with Ya’alon knows that he is furious.

From here to politics: Is Ya’alon capable of leaving the Likud and setting out on a new political path? It depends on how much he is pushed against the wall. The Israeli political system is now nearly paralyzed due to the opening of a police investigation against Shas leader Aryeh Deri (on suspicions of corruption), and a police probe that is likely to lead to an investigation against leader of the Zionist Camp Isaac Herzog. But the political system is also busy looking for new creative ways with which to replace Netanyahu.

Nowadays, the most talked about (possible new) configuration is that of Finance Minister Moshe Kahlon, who left the Likud to found the Kulanu Party, together with former Education Minister and popular Likud member Gideon Saar, who left the Knesset a few months ago. The two are attempting to woo former Chief of Staff Gabi Ashkenazi. A poll published on March 24 in daily Ha’aretz claims that such a party could win 24 mandates and constitute the largest party in the Knesset.

“Netanyahu can be toppled only from the right,” a political source told Al-Monitor on condition of anonymity. “The left is weak and losing public support, and the center is not mature enough yet.” The intent is to prevent Netanyahu from casting the next elections as a struggle between him and “the entire left,” by establishing a Likud clone without Netanyahu. Saar is working on this project full-time, as is Kahlon. One of them holds the social justice banner (Kahlon), while the other covers the Likud and ultra-Orthodox turf (Saar). What they lack, however, is a general. Meanwhile, Ashkenazi still shuffles his feet: He is undecided whether to attempt to take the Labor Party by storm (the police probe against Herzog serves him well), or to join head of Yesh Atid Party Yair Lapid as the No. 2.

What will happen if Ya’alon will receive an attractive offer from Saar-Kahlon? Will he insist on heading this new party, if and when it rises? Ya’alon is already 65 years old; all the running around between the Likud’s Central Committee members and the party’s rank and file does not make him happy. The Likud Party’s dependence on the settlers and extremists is making him miserable. Such an offer to Ya’alon — assuming it has not been already made — could constitute a dilemma for him.

Meanwhile, recent weeks have shown that to the public's horror Ya’alon has become almost the only responsible adult in Netanyahu’s government. After former Minister Dan Meridor wasn't elected to the Likud Party list, Saar resigned and former Minister Benny Begin was sidelined, Ya’alon found himself as the only clear and sane voice in the ruling party. He still insists on believing in the rule of law, in backing up the Supreme Court, in opposing racism of any type and serving as a clear moral guidepost vis-a-vis the general fiery atmosphere spreading throughout the Israeli public under the aegis of the recent terror wave.

In the past, Ya’alon stood by Netanyahu in diplomatic issues and prevented any chance for advancement in Israeli-Palestinian negotiations. In fact, Ya’alon’s misfortunate verbal expressions often harmed the fabric of Israel’s relationship with the United States. So it is ironic that he is the one who has suddenly become the great (white) hope for replacing Netanyahu and founding a saner, more ethical and principled political alternative for Israel’s national camp (center-right) that is growing ever stronger.

Will he rise to the challenge? The chances of that happening are not high. Ya’alon still believes that the sane elements of his party will eventually gain the upper hand. He feels that at the end of the day the public will be able to distinguish between responsible, stable, prudent leaders who have a firm hand on the rudder, and the “young goats” in his words — according to the above-mentioned associate — who “are trying to drag the country into the abyss.” It is not at all clear that his assessment is correct.