Will US funders shell out for new political party in Israel?

Former Defense Minister Moshe Ya'alon has begun laying the groundwork for his own party to offer a more moderate alternative to Prime Minister Benjamin Netanyahu. 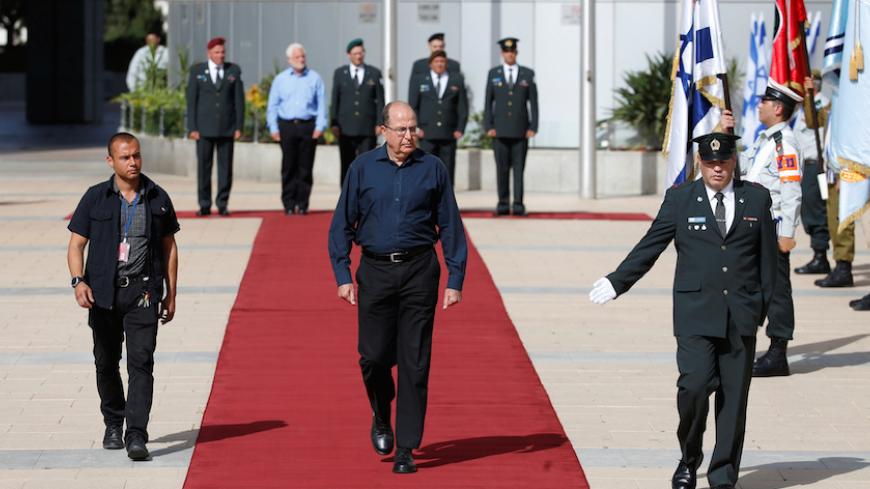 Toward the end of August, former Israeli Defense Minister Moshe Ya’alon will fly to the United States for a five-week visit. He will spend most of his time at the Washington Institute for Near East Policy, lecturing, holding talks in closed forums and exchanging ideas about security and diplomacy.

Between those sessions, Ya’alon is expected to hold diplomatic-like meetings with senior members of the US administration with whom he has developed a rapport, such as Secretary of Defense Ashton Carter or the person frequently mentioned as a candidate for the next secretary of defense, Michele Flournoy. Ya’alon will also spend his time in the United States raising money for a new political party he will head.

Ya’alon is now a “concerned citizen.” Although he never formally shut the door on the Likud (Ya’alon is still a party member and holds meetings with party activists), the chances of him running for the party’s leadership are slim at best as long as Prime Minister Benjamin Netanyahu is around, and the way it looks now, Netanyahu isn’t going anywhere.

Ever since he resigned from the government and Knesset May 20 amid a huge commotion, Ya’alon has been preparing himself for the next election. He spends two days a week at the Institute for National Security Studies, and the rest of the time he is preparing himself for the political odyssey that is the inevitable outcome of his decision. So far, he hasn’t been doing too badly. He has held dozens of meetings with people who might join forces with him politically in the future, sent out feelers and released various initial statements of intent.

One interesting figure who might end up in Ya’alon’s party is former Chief of Staff Gabi Ashkenazi, For years he has been flirting with the idea of diving into the political waters, but he turned down an offer from Yesh Atid head Yair Lapid and ruled Labor out entirely. Still, Ashkenazi has yet to dismiss the idea of entering politics. It is actually a pressing issue for him, since he sees it as a way to settle his score with Netanyahu. He has an excellent relationship with Ya’alon based on years of admiration and friendship. Joining forces with Ya’alon could then be the right choice for him. Ya’alon at the top with Ashkenazi as his number two is not such an unreasonable idea.

Feelers sent out between Ya’alon and Lapid about the possibility of them joining forces have come to a dead end. Neither of them is willing to forego the top spot on a joint list. They both want to lead. They both want to be prime minister. Lapid has managed to reinvent himself and is now soaring in the polls. He made it clear to Ya’alon that he has no intention of forfeiting the party he created and his achievements. Meanwhile, Ya’alon can’t understand how Lapid refuses to accept that he has priority by dint of the fact that he was once chief of staff and minister of defense.

What this means is that in the next election, barring some unlikely event, a new party will be born. While it still has no official name, it will be modeled after Kulanu and Yesh Atid: a party based on the leadership of its chairman. Ya’alon will determine and decide its character and course, navigate it and decide who will represent it in the Knesset. If Kahlon, Ya’alon and Lapid do all run separately, the result will be a divided political system in which players will have a hard time forming a single alternative to Netanyahu.

Ya’alon will soon head out to the field, meet with the public, hold parlor meetings and establish his political operation. Meanwhile, he is working out of a small office in the Tel Aviv area and preparing for what comes next. No matter how you look at it, the party that Ya’alon creates should be an interesting new development in the next election.

Much like Lapid in the 2013 elections and Kahlon in 2015, Ya’alon has the potential to become a magnet for a diverse electorate. Unlike Lapid and Kahlon, however, neither of whom ran for prime minister, Ya’alon has the guts to take a stand against Netanyahu by presenting himself as an alternative.

Based on the conversations Ya’alon has been having, we are starting to see the outline of the kind of party he would like to create, along with its agenda. It will be a “sane” right-wing party, attractive to Likud supporters who are fed up with how their party has veered to the right, along the lines of HaBayit HaYehudi. At the same time, however, supporters of the moderate left, concerned about the ways democracy and the rule of law are being trampled and how the media is being threatened, will find a warm home there as well. After all, Ya’alon originally comes from the Labor movement.

The fact is that Ya’alon found himself on a collision course with Netanyahu and the far right when he chose the rule of law over pandering to the right-wing electorate. The climax, of course, was the case of the solider Elor Azaria, the shooter from Hebron. Ya’alon’s response added to his appeal among the center left.

The question now is how Ya’alon will attract a leftist electorate without committing himself to a diplomatic process — in the spirit, at least, of a two-state solution. Ya’alon is convinced that even the moderate left, including the Zionist Camp, understands that right now there is no one to talk to on the Palestinian side. If he's right, it might be best to just manage the conflict and make do with investing in the development of the Palestinian economy, in coexistence and in security coordination.

On paper, at least, Ya’alon has all the characteristics and experience needed to compete for the office of prime minister on a security-based platform. Politically, he is not considered a sly and sophisticated player like Netanyahu or Kahlon, but maybe his lack of polish will be attractive to a public fed up with all the political games.

Ya’alon is hardly charismatic. Nor is he a natural campaigner like Netanyahu or Lapid. In a world where image is everything, in which the leader is first and foremost a presenter, Ya’alon will have to brand himself as a different kind of politician.

Ya’alon is now at the starting line. His resignation positioned him as an alternative to Netanyahu, but where will it all lead? Will he upset the next election? Will he shatter Lapid’s electorate and steal votes from the Likud? Or will the long and brutal political game in which so many disappear wear him out? It is still too early to tell.