With opposition chair Isaac Herzog failing to join the coalition, Yesh Atid head Yair Lapid, also in the opposition, is getting stronger. 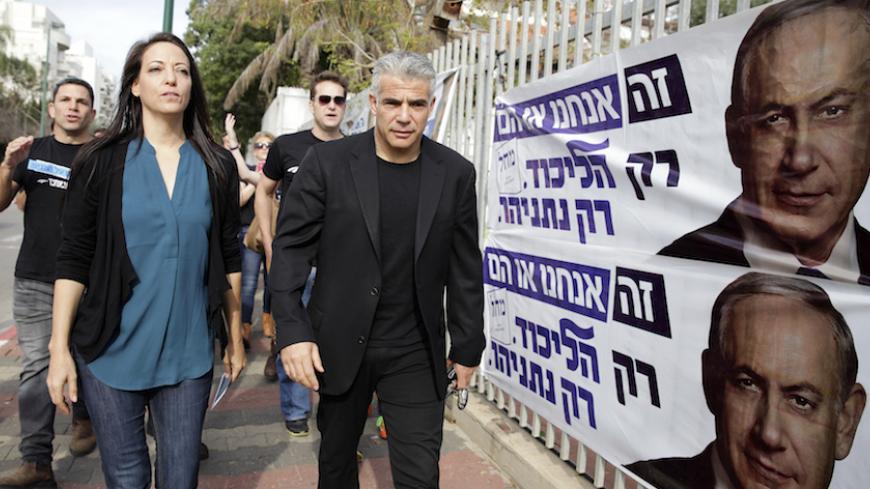 On May 20, soon after recently resigned Defense Minister Moshe Ya’alon announced that he isn't quitting politics, and that he would run in the future for a top spot in the country’s leadership, the new chairman of the coalition, Knesset member David Bitan of the Likud, was quick to provide his own interpretation of this statement. He determined that Ya’alon would assume the No. 2 slot in Yair Lapid’s Yesh Atid party.

It is doubtful that Bitan based his remarks on any real information he might have. It is far more reasonable to assume that this was simply an assessment that fit in neatly with all the dizzying events that reshuffled the Israeli political deck and allowed Prime Minister Benjamin Netanyahu to open the Knesset’s summer session on May 23, with a stable coalition of 66 members.

Now that he has resigned from the government and Knesset, it looks like Ya’alon is about to leave the Likud Party as well. In other words, Bitan’s scenario is not at all unfounded. Assuming that the former defense minister intends to keep his promise and remain a central figure in Israeli politics, Yesh Atid — the second-largest party in the current polls — is a perfect fit for him. He will just have to put his ego aside, when the time comes, because Lapid as the chairman of that party has no plans to give up his position to anyone.

After the recent political shakeup — with Netanyahu offering the defense portfolio to Yisrael Beitenu chair Avigdor Liberman — Yesh Atid comes out the big winner in just about every way. Lapid has established himself as the only real alternative to the Netanyahu government, at least at this stage. With the polls giving him an average of 20 seats, the former finance minister is already at an excellent starting point for the next election. All that he is missing is a right-leaning security expert among the party’s top leadership, so that he can break through the barriers imposed on him as someone identified with the center-left and win over voters also from the Likud.

There is good reason why Lapid’s longest courtship until now was with former IDF Chief of Staff Gabi Ashkenazi. Now, however, there is an equally attractive option available to him: a highly regarded Likud defense minister who has had his fill of Netanyahu and is inclined to get back at the prime minister.

Ya’alon does have other options. One of them is to establish a new center-right party, but that is a longer and more complicated path, which is likely to include bitter clashes of ego between the various key figures who would lead such a party. Right now, the names under consideration are former Minister Gideon Saar and Finance Minister Moshe Kahlon.

That's not the only bit of good news as far as Lapid is concerned. The Zionist Camp, a combination of the Labor and Hatnua parties, which was supposed to take over the reins of government from Netanyahu after the last March 2015 election, is collapsing like a house of cards. Its core party, Labor, is caught in the midst of some of the most contentious infighting in its history, on the backdrop of negotiations over the past few months to join the Netanyahu coalition, a fight that could end with yet another split in the party.

Lapid has already sucked away votes from the Zionist Camp, and he has yet to exhaust that option. The longer the low intensity but passionate squabbles between the party’s former Chair Shelly Yachimovich and its current Chair Isaac Herzog continue, the more votes the party will see switching allegiance to Yesh Atid.

Lapid is starting the Knesset’s summer session as the de facto leader of the opposition. Herzog is well over his head in his own party’s quagmire and is locked in a brutal fight for survival, which is causing him to lose his grip of the Zionist Camp’s leadership. Many party members see the coalition negotiations that Herzog led as a failure. In addition, he himself admitted that parts of his party are not confident in his ability to offer a viable alternative to the current prime minister. In such a situation, what validity could Herzog possibly have as the leader of the opposition, who is supposed to be manning the barricades against Netanyahu?

Over the next few months, the Labor Party will be sucked into a bitter and dirty fight over the party’s leadership, leaving little time for it to focus on the opposition’s struggles. From his side, Lapid will continue to operate undeterred in this space, bypassing the Labor Party from the right and bolstering his position as an alternative to the current government. At the same time, he will also continue with his diplomatic pilgrimages to the world’s capitals.

Up until last week’s drama, Lapid managed very well in the opposition. On one hand, he collaborated with Liberman, all the while making sure that their cooperation received the right amount of publicity. At the same time, he fled from the center-left parties like Meretz and Labor as if they were the plague. Lapid stuck to his message that his party is not leftist but centrist, with a right-wing orientation, and never let go of it. This was yet another strategic approach, and Lapid never veered off course. The road to the prime minister’s residence on Balfour Street passes through the right, and Lapid is a disciplined soldier when it comes to campaigns.

As the sole leader of the party he founded, Lapid also benefits from a simple and effective party mechanism with numerous resources at his disposal and internal calm. Unlike the Zionist Camp, there is no one to challenge his position in the party. While Herzog and Yachimovich spent last week engaged in incessant verbal attacks against each other, Lapid was in Washington May 16 on what was described as a diplomatic visit, keeping to an agenda befitting the leader of the opposition.

Over the past few months, Lapid has been hard at work on a strategic plan that should place him in the prime minister’s office right after the next elections. More than a few politicians and journalists see his ambition as an arrogant agenda and one that should not be taken seriously. On the other hand, as time passes, it increasingly seems that this assessment is an underestimation. Lapid’s attempts to ingratiate himself with the ultra-Orthodox, which included the release of photos showing him wrapped in a prayer shawl and wearing a yarmulke, were the subject of derision — which is completely understandable. The fight against the ultra-Orthodox was one of the major issues in the campaign that brought this former journalist into politics in the first place, in 2013. Nevertheless, Lapid realizes that he needs the support of the ultra-Orthodox factions to become prime minister, and is willing to swallow that bitter pill to achieve his objective.

This too is part of a well-organized plan on his part. Lapid's message is not just aimed at winning the support of the ultra-Orthodox parties’ leadership; it mainly appeals to the Likud’s traditional voters: the soft right that goes to the synagogue on the Sabbath. The fact that Lapid has turned to the right in both rhetoric and agenda is a calculated measure, with the intention of winning him the support of moderate Likud voters. While it hasn’t really worked for him until now, and his party is not yet considered to have an authoritative voice on security matters (a key issue for right-wing voters), Lapid refuses to give up. He continues to attend Likud parlor meetings in an effort to break down the barriers separating him from this electorate. Getting Ya'alon — who just resigned from the government — on his side could certainly help Lapid achieve that goal.

A senior source close to Netanyahu told Al-Monitor on condition of anonymity that the prime minister is not worried about Lapid since he will not be able to piece together a coalition if he wins 25 seats. He added, “The ultra-Orthodox parties will not sit a government headed by him.” He explained that this was the reason why Netanyahu did not try to include the chairman of Yesh Atid in his government. He did not want to be the one to seat Yesh Atid and the ultra-Orthodox in the same government and be responsible for any reconciliation between the parties. This is a sensible working assumption, at least for now, but it has long been proven that every party has a price, and that includes the ultra-Orthodox parties.