Has Netanyahu met his match?

A recent poll showing Yair Lapid's Yesh Atid to be the strongest party in Israel is the talk of Israeli politics. 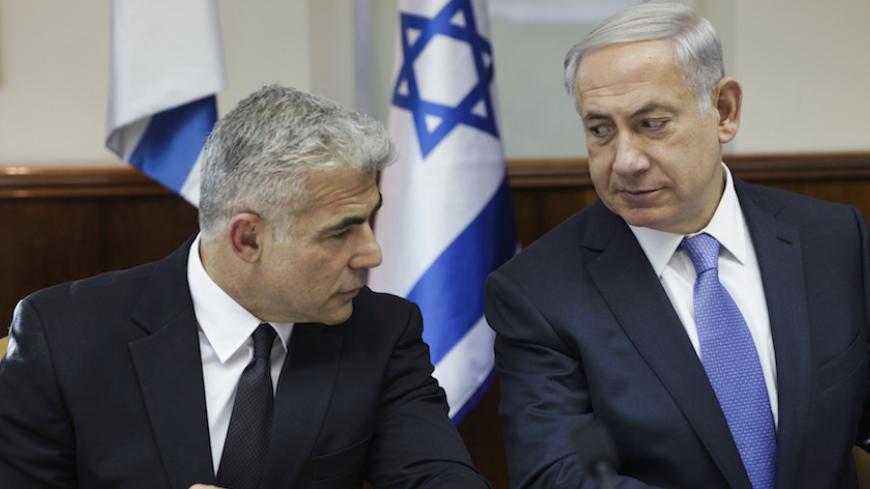 As Zionist Camp leader Isaac Herzog wages a daily, uphill battle for survival within his own party, a Channel 2 survey has dealt him an additional blow. A Sept. 6 poll indicated that Yesh Atid would take the lead as the strongest party in the opposition if elections were held today. Although only a survey, and with elections nowhere on the horizon, this poll has seized the agenda like no other.

For a brief moment during the 2015 election cycle, Herzog had been viewed as a possible alternative to Prime Minister Benjamin Netanyahu, with the Zionist Camp garnering 24 Knesset seats. Now, however, Herzog heads a party predicted by the poll to win only 13 of the Knesset’s 120 seats. Although Herzog is the current de facto head of the opposition, by virtue of those 24 (real, not virtual) seats in the latest elections, when the Knesset returns from its summer recess in October for the winter session, all eyes will be on Yesh Atid leader Yair Lapid as an alternative to Netanyahu.

So what is it about this opinion poll that continues to create such a stir and generate headlines days after its announcement? How dramatic is it, in fact, and worrying for the prime minister? Is it yet another example of wishful thinking on the part of some in the media who want to build up Lapid as an alternative to Netanyahu just as some did in exalting Herzog during the last election campaign? Even if one takes the approach adopted by Netanyahu and his people that “there’s no reason to get excited over a survey,” as posted on the Likud's Facebook page, the results are undoubtedly major news.

For the first time since the 2015 elections, Netanyahu’s Likud has lost its place, on paper, as the biggest party in the Knesset, reduced to a barely medium-sized party. This is a major personal achievement for Lapid, who through hard, targeted work, superb campaigning skills and precision strategy has proven it possible to put a dent in Netanyahu, who since his dizzying 2015 election victory has been walking around with the air that he’ll be around forever. Lapid has cracked Netanyahu's image of invincibility and now faces him as a serious challenger.

The survey shows no such tectonic shifts between the political blocs on the left and the right. Lapid appears unable to put together a governing coalition, however, his being a total non-starter to the ultra-Orthodox parties. According to the poll, the right-wing bloc retains its strength, more or less. The Likud, shrinking from 30 to 22 Knesset seats, loses these seats to Yisrael Beitenu, led by Defense Minister Avigdor Liberman and mustering 10 Knesset seats, four more than it got in the 2015 elections, and to HaBayit HaYeHudi, headed by Education Minister Naftali Bennett, with 14 seats as opposed to its current eight. This is not the first time that Netanyahu has lost support to other parties within the right-wing political bloc.

The left-wing bloc also retains its previous level of support, more or less. Although Lapid defines himself as a centrist, most of his voters view themselves as center-left. Lapid’s growth is based mostly on the decline of the Zionist Camp in the poll and also reflects Herzog’s profound weakness and failure to provide a credible alternative to Netanyahu. This failure is the result of Herzog's continuous negotiations with the prime minister on joining his government. In fact, there is no diplomatic or ideological alternative to Netanyahu on the left. The Lapid alternative emanates from the center, with Lapid being careful to distance himself from any identification with the left.

According to the poll, the left-wing Zionist bloc, without Lapid, consists only of the Zionist Camp and Meretz, which retains its election result of five seats. Meretz Chair Zehava Gal-On detects in the survey a huge opportunity for her party, which she thinks can build itself on the ruins of Labor, the main party within the Zionist Camp, to become the biggest party on the left.

“I wasn’t crestfallen at the five seats Meretz got in the survey,” Gal-On told Al-Monitor. “On the contrary. I see this clearly as our big opportunity. Lapid’s achievement is Herzog’s failure and Meretz’s chance. Basically, a survey is only a survey, and it reflects a certain climate and trends that should be monitored. But when I analyze these results, it’s clear a vacuum has been created on the left because of the Labor Party’s downfall, and this is the time for us to act.”

Gal-On faults Lapid and Herzog for cooperating with the right-wing’s witch hunt against the left in the hope of picking up a few more votes from the moderate right. “Therefore, now, of all times, when it’s clear that Meretz is the only party true to its principles as the representative of the left, it can assume leadership of the bloc,” Gal-On said. “I’m convinced that the political arena is changing now, and we will grow a lot. We don’t intend to waste time and will start to act. This requires us to change gears and open ourselves up to new audiences.”

Whereas Gal-On is hoping to leverage Labor’s downfall to invigorate the ranks of Meretz, Netanyahu will be forced from now on into maneuvering within a political arena that may be changing and producing an alternative to him. No one knows better than Netanyahu that a virtual poll can also translate into concrete reality.

At the same time, players such as former Defense Minister Moshe Ya'alon and former Israel Defense Forces Chief of Staff Gabi Ashkenazi, who have been sitting on the fence and whose names have been mentioned as possible candidates for prime minister, must chart their courses anew. Another interesting element of the poll is that Lapid, of all people, inexperienced in defense matters and pushing a patently civilian agenda, has managed to overtake "Mr. Security," Netanyahu. Does this mean that Israelis are willing to entrust the affairs of state to someone whose sum total of defense experience is a brief stint in the security Cabinet? Netanyahu, it would seem, will do everything possible going forward to brand Lapid as someone to whom it would be dangerous to entrust the affairs of state.

A source close to Netanyahu told Al-Monitor on condition of anonymity, “Netanyahu really isn’t bothered by Lapid. After all, these are 24 virtual seats but they’re not really his. These are votes that wonder around the political arena and have for now parked themselves in his area because the terror attacks have died down and things are calm. But Lapid is merely a default, and just as quickly as he ballooned, he will shrink to his real dimensions.” ​