Why it's crunch time for Israeli left

The Israeli left is at its lowest point in its history and must reinvent itself to survive. 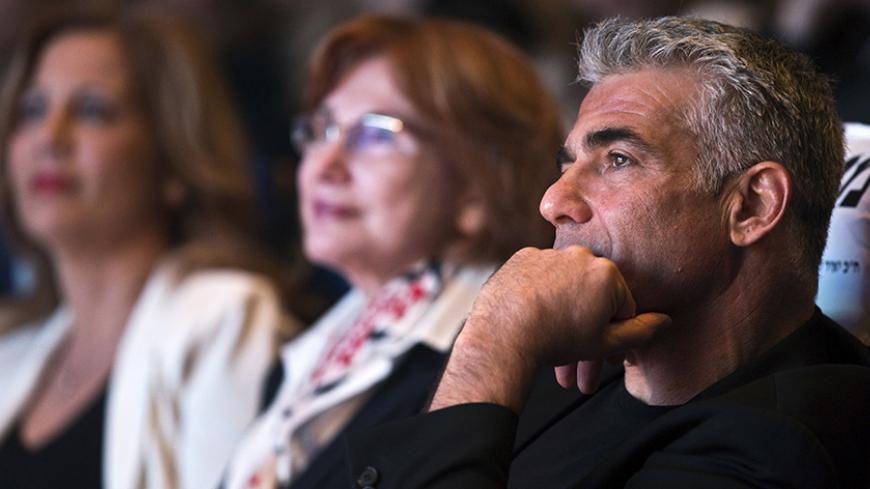 In February, Yesh Atid Chairman Yair Lapid was a guest at the Globes Conference, where he explained why the left would not win an Israeli election in the next 20 years. Lapid argued, “You see it demographically, by age and by opinion. Every year, people who believe in leftist ideas die, and people with right-wing and centrist ideas are born. People see that they are stabbed with knives and see the madness of the world around us, and the numbers say that the left will not win an election here. The center will. That’s where we’re headed. No one could sell me as a leftist; my father was a [Menachem] Begin man.”

This statement, backed by moves, actions and declarations, explain Lapid’s rise, which reached its latest zenith in a Sept. 6 poll that indicates his party would have won the most Knesset seats had elections taken place that day.

After the 2015 elections, Lapid understood very well that the path to the prime minister’s office passes through the right by way of making the left into an outcast. He accused the left of silence in the face of Palestinian President Mahmoud Abbas' lies (so he claimed) and brushed off any affiliation with the left-wing bloc, although his electoral base is found deep within the center-left, and his rise in the polls is mostly at the expense of the center-left Zionist Camp.

However one looks at it, it’s a paradox: Lapid insults the left, and shakes it off in every way, while most of his voters are the beating heart of the moderate ideological left, the same left that bounced between Kadima, Labor, Hatnua and the Zionist Camp in the past decade. Lapid has succeeded in making Yesh Atid the largest party by turning a cold shoulder to the left and attempting to flatter the ultra-Orthodox. His success in the September poll is the result of hard work, the strategy behind which is the branding of himself as “lite right.” The big story from the poll is not only the 24 seats it says Lapid could win, but also the crash of Israel's political left, perhaps marking the lowest point in its history.

If one adopts Lapid’s self-definition as a right-wing man, then the Zionist left in Israel has shrunk to 18 Knesset seats — 13 for the Zionist Camp and five for Meretz. This is perhaps the most dramatic data point from the poll, which reflects the process by which the left has become a marginal political outcast. The public is fleeing from the Zionist left like it would from a disease. It does not reward members from the Zionist Camp and Meretz for their hard, high-quality work in the Knesset and is not impressed by their allegiance to the flag of peace.

If until the last election it seemed that Israelis had to decide between two strong forces — the right led by Likud and Benjamin Netanyahu and the center-left led by the Zionist Camp — in the next election the left will be a marginal player, at least according to the September poll. A recent incident tells the story.

Addressing a petition by Meretz Chairwoman Zehava Gal-On, the High Court on Sept. 6 reversed the prime minister’s directive to refrain from infrastructure repair work on the Sabbath. While Gal-On and Meretz chalked up a great achievement, Lapid abstained from getting involved to avoid raising the ire of the ultra-Orthodox, who oppose the railway work on the Sabbath and with whom he’s trying to make peace on his path to the prime minister’s office. Lapid's public, the vast majority of which opposes religious coercion, did not hold this against him. Gal-On and other Meretz members, the ideologues who worked against religious coercion, were not rewarded electorally, according to the poll, remaining at their five seats and labeled the dangerous and far-out left.

Lapid has long understood that his position on the center-left of the political map would not get him to his goal. In this regard, as a relatively new player — Yesh Atid was founded in 2012 — he did not blaze the path, but shaped himself to a political reality where the left becomes irrelevant and is considered anti-Zionist. It is an ongoing process, the seeds of which were sown by Ehud Barak while chairman of the Labor Party when he decided after the failure of the 2000 Camp David talks that there’s “no partner” on the Palestinian side with which to talk peace. Later, the second intifada broke out, which turned the Israeli public into skeptics of peace.

In recent years, another process has taken place — aggressive campaigns against the left that have portrayed it as dangerous and have become the weapon of choice for right-wing politicians. Netanyahu is of course the most sophisticated and prominent among these players. Alongside him, Defense Minister Avigdor Liberman and Education Minister Naftali Bennett have also done effective work in this regard. There are plenty of examples.

In the last election cycle, for instance, Netanyahu turned the left into a punching bag on a daily basis. At election rallies, on Facebook and in interviews, he truly demonized it. “The day after the election, the left will run to concede to Abu Mazen and others. They will bring about the establishment of Hamastan 2 in the heart of the country,” he warned at an election rally. There is also the Likud election video proclaiming that the left is good for the Islamic State and accusing members of the Knesset from the Zionist Camp of being post-Zionist. For his part, Liberman repeatedly accused left-wing organizations of aiding terrorism.

The left had no fitting response to these attacks, and thus indirectly aided the process of its own erosion. More gravely, after the election and the realization that the bon ton of the Israeli public is on the right, especially in light of the individual intifada, Zionist Camp leader Isaac Herzog too frequently tried to turn right, thus submitting to this trend.

These are difficult days for the Israeli left and its leaders, much more so than it seems. It appears that the left-wing camp, which was previously also known as the peace camp, has become illegitimate and post-Zionist. This is of course a misrepresentation, because the Israeli left, including Meretz, which is far left, includes citizens who are no less Zionist than Culture Minister Miri Regev of Likud. If military service is an indication of Zionism, then the left can boast of the greatest number of generals and senior security figures.

There is no doubt that this is a time of enormous challenge, historic even, for the course of the left. If it wants to survive, it has to reinvent itself and approach the public with self-confidence, and unapologetically, with a clear and reasoned diplomatic path. Even if it takes 20 years to return to power, it’s the obligation of its leaders.

by Haitham EL-TABEI with AFP correspondents in the Middle East | AFP | May 17, 2022
END_OF_DOCUMENT_TOKEN_TO_BE_REPLACED