Senior figures within Israel's left-wing Meretz Party are debating whether open primaries are the best method to save the party from disappearing. 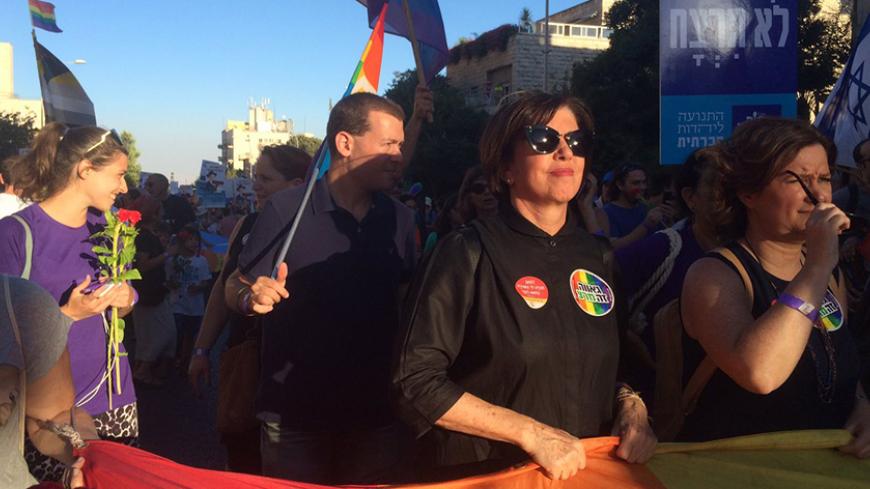 "Political wheeler-dealership won this evening. If Meretz doesn't open up, it will simply cease to exist," said Meretz Party head Zehava Gal-On on March 14. Her disappointment and frustration were completely understandable. She was responding to a decision that day by her party's Central Committee to reject her proposal to hold open primaries for the party leadership.

Opposition to Gal-On's proposal was led by Knesset member Ilan Gilon, who also plans to run for the leadership of Meretz in the next election. Reports on Gal-On's defeat focused on the political significance of this infighting within Meretz. Unfortunately, the important debate over whether to open up the primaries was pushed to the side.

This is an issue that has gathered momentum among the Israeli center-left over the past few months. It even encompasses the Labor Party and the Hatnua Party, which comprise the Zionist Camp. Hatnua leader Tzipi Livni is pushing for open primaries for the entire center-left bloc, selling the idea as a kind of wonder drug to heal the crisis facing the bloc, which has been getting weaker over the past few years.

As chair of a small left-wing party with five Knesset seats, Gal-On is well aware that the future of Meretz depends on her ability to expand its voter base and reach more young people, more Mizrahi Jews and more voters from the periphery. She has been banging her head against the wall trying to do just this. Her attempts to get open primaries approved show how bold she is for two reasons: First, she is admitting that the current Meretz leadership is failing to break past the circles of the Ashkenazi left based in Tel Aviv. Second, she is putting her own position at risk of her own initiative.

Gal-On told members of her party committee that as head of Meretz, it is her responsibility "to take steps to expand and present a diverse list, which includes new sectors. That is why I am willing to leave my comfort zone and put myself up for election now. Meretz needs to take steps that will double its strength and … impact the way the Israeli left looks … that is why open primaries are the right thing for Meretz and the left-wing camp in general."

Though her initiative failed to pass a vote, Gal-On promised that she would not give up. She would continue to promote open primaries in her party.

At the basis of the open primaries system lies the desire to increase citizen involvement in the democratic processes and reduce the power of the political wheeler-dealers. Unlike closed primaries in which only members of the party who paid their dues and are registered members for a minimum period are allowed to vote for the party's leader and its Knesset list, open primaries allow even people who are not members of the party to select its representatives.

On one hand, the idea sounds like democracy at its best and like a solution to one of the sensitive weak points of politics. On the other hand, it means very serious change to the life of the party. In the case of Meretz, it is not at all certain that it would even extract it from its malaise among the public.

Somewhere between the current situation and open primaries, in which even voters for the right-wing HaBayit HaYehudi, for example, would have a chance to influence who the next Meretz chair will be, there are many other options to expand the party's support base. One of these is recruiting attractive Knesset candidates individually, as it did in 2009, when it recruited journalist Nitzan Hurwitz. If Meretz wants to attract young voters from the Mizrahi periphery, it could incorporate candidates for the party leadership who appeal to that particular sector.

Support for open primaries is also beginning to gather momentum in the Zionist Camp. The idea there is to initiate a process that would unite all the parties on the left and have the entire population select a single candidate to head that party. The Zionist Camp believes that this will stabilize the left in the coming election cycles as a single, unified bloc and increase its chances to defeat a right-wing candidate. Livni's proposal would have all the parties aligned with the center-left, as well as organizations and associations that share its ideals, create a mechanism of sorts to elect a chair for the entire bloc. Based on this model, anyone who considers herself as sharing the left-wing worldview will be eligible to participate in electing that leader. Instead of party membership as a requirement, all that will be necessary is a statement of support.

In an interview with Army Radio on March 12, leader of the Zionist Camp and Knesset member Isaac Herzog said he does not reject the idea of early primaries for the entire center-left bloc. Nevertheless, he also asked, "Is it possible? Unfortunately, right now Lapid's refusal [to participate] is an absolute and total refusal."

With polls showing Yesh Atid Chairman Yair Lapid as head of the largest party in the center-left bloc (if elections were held today), it should come as no surprise that he is not even willing to consider the initiative. He has made a point of keeping his distance from the political left as if it were toxic and believes that the very idea of discussing the opportunity could cause him enormous harm. Lapid's position makes Livni's idea an impossibility from the get-go. Meanwhile, the Labor Party is preparing for normal, closed primaries in July.

Knesset member and former Labor Party Chairman Amir Peretz, who announced that he would run again for the party leadership, is also opposed to Livni's idea. He claims that it is overly simplistic, and that people who have not really studied the matter in-depth are disseminating it. The motivation behind Peretz's opposition is obvious: He has brought many new members into the party, and his chances of winning in closed primaries are good. At the same time, however, his reasoning behind rejecting open primaries is solid.

The best example of why open primaries should be rejected is what happened to the Republican Party in France when it chose a candidate for president in November. Of the three leading candidates — former President Nicolas Sarkozy, former Prime Minister Alain Juppe and former Prime Minister Francois Fillon, the latter was elected. Every citizen was entitled to vote in these primaries in exchange for paying primaries participation dues of 2 euros ($2.15) and signing a form vowing support for the Republican Party's principles. What happened was that people clearly identified with the left participated in the vote and influenced the election, all in an effort to prevent Sarkozy from returning to the political arena.

While French experts expected some 2 million people to participate in the vote, in the end, 4 million people did, reshuffling the deck entirely. Conventional wisdom was that Juppe, who represents the moderate right, would emerge as the winner. Fillon, a candidate who came out against immigrants and supported traditional family values, surprised everyone by winning.

Fillon has since become entangled in a number of personal corruption scandals over the past few weeks. An investigation launched against him the week of March 15 focuses on the alleged fictitious employment of his wife as a parliamentary assistant. In other words, the Republican Party will go to the polls in April with a problematic candidate who cannot be replaced. So before the Israeli left dives headfirst into the turbulent trend of open primaries, it would do well to study the French precedent in-depth.