Meretz chairwoman: Herzog will need us to form coalition

In an interview with Al-Monitor, Meretz Party Chairwoman Zehava Gal-On calls upon leftist voters not to fall for the Zionist Camp's machinations, which threaten her party and the chances for a left-wing coalition. 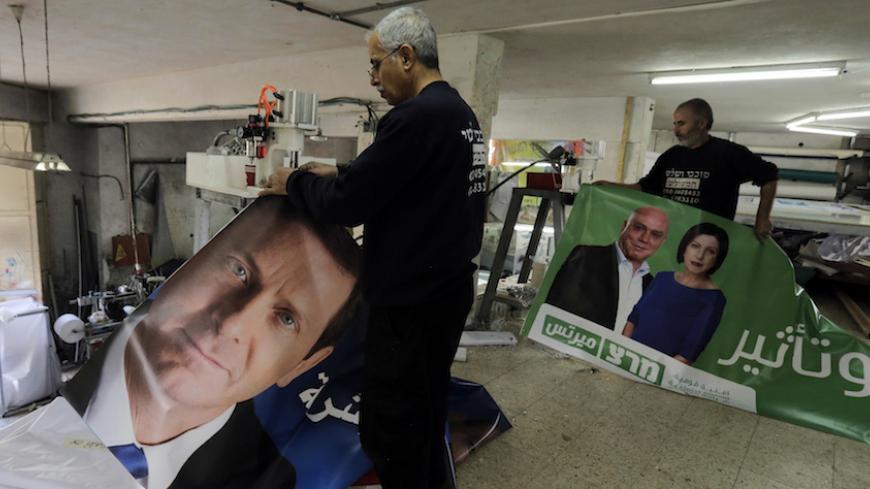 Meretz Party Chairwoman Zehava Gal-On leaves her frustrations at home every morning as she sets out for another endless day. She travels to the traditional bastions of Meretz support in the kibbutzim, universities, the Arab sector and big cities, and tries to bring voters back to the fold.

She's very frustrated, though. The decision by Meretz voters to jump to the Zionist Camp apparently does not result from disappointment with the party’s six Knesset members, who stood out with their social legislative initiatives and kept promoting peace with the Palestinians. The voters simply identified an opportunity to replace Prime Minister Benjamin Netanyahu by supporting a larger party. Paradoxically, the left could end up paying dearly for its hopes of ousting him. If the center-left bloc loses voters, Zionist Camp leader Isaac Herzog’s prospects of forming a government will decline.

According to the polls, Meretz has been walking a precarious line on the verge of the electoral threshold of four Knesset seats. In some polls, the party looks likely to get one seat above the bar; in others, it goes down to the dangerous line under which Meretz could simply disappear.

Four days are left before the March 17 elections, and Gal-On is well aware of the burden on her shoulders. She could be the one on whose watch Meretz disappears from the Knesset after being a fixture on the political scene more than two decades. Such a failure, even with extenuating circumstances, will be linked to her name.

Gal-On was elected Meretz leader in 2012 and in the 2013 elections managed to double the party’s representation from three to six Knesset seats. She is a highly esteemed politician — not just on the left — and is now the only woman to head a political party after former Hatnua head and now Zionist Camp co-leader Tzipi Livni and former Labor Chairwoman Shelly Yachimovich were pushed out of their leadership positions.

In an interview with Al-Monitor, Gal-On says she 's certain Meretz voters will return home if they understand that without the party, Herzog cannot become prime minister.

Al-Monitor:  Meretz has now been in the danger zone for long weeks. Are you doing some soul-searching?

Gal-On:  I’m not dealing with soul-searching right now. There will be time for that after the elections. Right now, I am focused on one mission only: I have a responsibility to make sure we remain in the Knesset, not just toward the other candidates but also toward the large public on the left, for whom we are the sole political home. Of course, these are difficult and complex times for me, and I can’t say there’s no frustration. But frustration is not an action plan. I am at war and I am not giving up. I rely on the Meretz voters to vote from the heart at the moment of truth.

Al-Monitor:  In recent days, you have launched a type of campaign that appeals to emotions, with the slogan, “We Must Not Lose Meretz.” Is it helping?

I’m starting to sense, on the ground, that our voters understand that this time, their vote is strategic. I and the other Knesset members are going around the country and warning Meretz voters not to buy into the spin of the Zionist Camp, according to which the president will choose the leader of the biggest party to form the next government. That’s not true. We saw back in 2009 that didn’t happen. Tzipi Livni headed the biggest party, but Netanyahu was the one who formed the government.

We’re explaining to them that this is a crass lie and an attempt to steal votes. Pure and simple. The president hands the task of forming the government to whoever has sufficient recommendations from the other parties. That means that if Meretz doesn’t exist anymore, Herzog won’t get enough recommenders. And our votes, those of the ideological left, will go down the drain and Herzog will not be the next prime minister. That’s why a Meretz ballot is the right strategic vote. Also, no one who ever voted Meretz regretted doing so.

Al-Monitor:  But there’s a real opportunity here to replace Netanyahu, and if the Zionist Camp does not come in significantly ahead of the Likud it won’t happen.

Gal-On:  As I said, that’s a Zionist Camp spin. I truly understand the overwhelming sentiment of “Anyone but Bibi,” and of course I identify with it. The Netanyahu days are a dark period and the public is right in wanting to replace him. But to do so, we need a strong Meretz. People don’t understand that if we don’t get in because the electoral threshold has been raised, all the votes we get will simply wind up in the trash. They don’t get transferred to Herzog, they just go to waste. The center-left bloc will lose the Knesset seats it had in the previous Knesset. That’s why every vote for Meretz expands the bloc.

In this election campaign, Meretz proved that at decisive moments, we are the only ones who fought for our agenda: for equal rights, against the violent public discourse, against racism. We are also the only ones who currently say we will recommend Herzog.

Al-Monitor:  Are voters abandoning you only because of what you call “the Zionist Camp spin”? After all, during Operation Protective Edge, when you protested against the war, voters left you because they didn’t like the fact that you went against the tide even as the fighting was ongoing.

Gal-On:  It’s true we dropped in the polls after Operation Protective Edge, but after a while, we rebounded and grew stronger. In recent weeks we’ve been conducting in-depth surveys to understand why people are leaving us, and the only reason is that they want to replace Bibi. They know that we are the leading Knesset party in terms of social legislation and that we are loyal to the diplomatic agenda, but they believe that if they vote Zionist Camp, Herzog will automatically become prime minister and change the regime. We are telling them: Don’t fall into that trap again. In 2009, Meretz almost disappeared; we had three seats.

The public is so fed up with Bibi that it is willing to fudge its views and close its eyes to all sorts of issues and matters. Meretz constituents don’t always take into account the fact that these elections may end up wiping out the only left-wing party. A Knesset without Meretz is a cowardly Knesset.

On every podium I reiterate my commitment to topple Bibi, but nonetheless, one mustn’t forget who was willing to sit in previous Netanyahu governments. After all, it’s not totally baseless to think that Herzog and Livni might join a Netanyahu government; they did so in the past. In the last elections Livni explained to us that Netanyahu was a national disaster, but was the first one to hook up with him. Herzog, too, was a minister in a Bibi’s government. It’s totally not unrealistic that a new unity government will be formed, and I don’t think Meretz voters will want to find their vote in the coalition along with Likud Knesset members Miri Regev and Danny Danon.

The truth must be told: These elections are about “anyone but Bibi,” nothing else. The most important questions are not on the agenda. It’s amazing, but Meretz is the only one talking about peace in this campaign and about the relationship between a strong economy and peace with the Palestinians. We are the last ones keeping the peace agenda alive.