In an interview with Al-Monitor, Meretz Party leader Zehava Gal-On defends the application of Palestinian President Mahmoud Abbas to 15 international treaties, claiming that this move could constitute a framework for continuing negotiations. 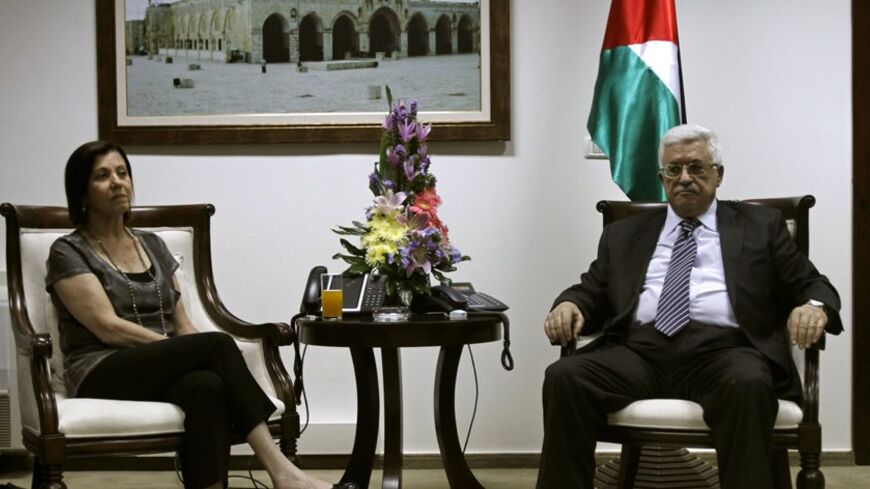 “The Palestinians were right to turn to the UN to get recognition. They had no other choice.” This surprising position is expressed by the chairwoman of the Meretz Party, Knesset member Zehava Gal-On, in an interview with Al-Monitor, which took place during the attempts to resuscitate the negotiations, on April 19. Gal-On refuses to adopt the insulted and accusatory narrative of Finance Minister Yair Lapid and Minister of Justice Tzipi Livni, and challenges it. Lapid and Livni, the heads of the centrist parties in the coalition, claim that the responsibility for the blowup of the diplomatic process lies with the chairman of the Palestinian Authority, Mahmoud Abbas, who submitted applications to 15 international treaties, to join as a state.

“I really don’t understand why we should be scared of the Palestinians going to the UN. I don’t understand all of the hysterics of Tzipi Livni and Yair Lapid. I really wasn’t troubled by it,” says Gal-On. As opposed to the heads of Yesh Atid and Hatnua parties, she doesn’t think this move was premeditated. “I don’t think he [Abbas] wanted [negotiations] to fail, but at the moment that Israel refused to carry out the fourth round and release the prisoners, he did the right thing.”

Gal-On should be listened to. Aside from the fact that she voices an original and quite a rare opinion in today's Israeli politics, the steady growth in public support of the party she heads indicates that she must be doing something right. Since the last elections, according to all the polls, Meretz’s strength is growing — even doubling — while the “fashionable parties” Yesh Atid and Hatnua are weakening.

Indeed, Gal-On, who all the way did not agree to blur her positions on the diplomatic front, even when Lapid and the former chairwoman of the Labor Party Shelly Yachimovich did so, proves that there is a payoff for consistency. In the latest comprehensive poll published in Israeli daily Yedioth Ahronoth on April 14, following the breakdown in the diplomatic process, Meretz received 10 seats — almost double the six seats it now holds in the Knesset.

The rest of the data in this poll is no less interesting. Lapid and Yesh Atid shrink to 10 seats, Foreign Minister Avigdor Liberman and former Likud Minister Moshe Kahlon, if they ran at the head of independent parties, would each win 10 seats; the Likud goes down to 22 seats and Labor headed by Isaac (Buji) Herzog grows by one seat, increasing to 16.

For Gal-On this is no less than a personal achievement. A few months before the last elections there was still doubt whether Meretz would reach the electoral threshold necessary for representation in the Knesset. Now, when she looks at the numbers, she finds proof for her claim that “there’s life after Bibi [Prime Minister Benjamin Netanyahu],” and that the center and leftist parties could establish a new government, even if this political bloc does not have a clear-cut leader like Netanyahu on the right.

“I look at this poll, and I grow convinced that we don’t need someone who could stand opposite Bibi,” she tells Al-Monitor. “There’s a tendency lately to say that after [former Prime Minister Ehud] Olmert and [former Israel Defense Forces chief of staff Gabi] Ashkenazi went the center-left has no candidate, and we’ll be left with Bibi again. I say that in the next elections, there could be unity between all the forces in the center-left.”

Al-Monitor: Who would lead this unified bloc? Buji?

Gal-On: It could certainly be Buji. And I believe it’s not ridiculous to think that it’s possible to overturn the rule of the right wing in the next elections. Anyone in the center-left camp should understand that this government has no interest in arriving at an arrangement [with the Palestinians]. If today the starting point is that Meretz and Kahlon would get 20 seats and Labor 16, we could establish a center-left government in which Meretz would be a key player. I really believe it.

Most of the public supports a compromise. In all the polls you can see that close to 70% support a two-state compromise and would be willing to pay a price for it. It’s true that there’s a kernel of settlers who would oppose it, but with this reality, if there were a courageous leader it would be possible to advance an arrangement.

Al-Monitor: And the possibility of creating an alternative government to Netanyahu in this Knesset? How realistic is it?

Gal-On: It doesn’t seem realistic because Tzipi [Livni] and Yair [Lapid] uphold Netanyahu’s government. They give him legitimacy and the seal of approval, and it has all just meant to serve their survival. Tzipi knew that she was going into a process that was a futile one, but she went in anyway.

And what did they do when the negotiations broke down? They were the first to join the chorus of criticism of Mahmoud Abbas, and it became clear that all their promises to the voters were deceptive. I don’t have a problem with [Finance Minister Naftali] Bennett or Liberman, or with [Likud Knesset member] Danny Danon, but Livni and Lapid deceived the public. They sit in a government that continues to send money to the settlements, and Yair is the finance minister.

Their behavior is political corruption, a clinging to power. They both also fear an election now, so that they have no interest in dismantling the government.

Al-Monitor: Was there a moment after the election when you believed Netanyahu, when he said that he intends to arrive at an arrangement with the Palestinians?

Gal-On: No. From the moment I saw that Bibi is held captive by the extreme right with Danny Danon and [coalition Chairman] Ofir Akunis — and this is before Bennett [joined the government] — I knew nothing would come of it. Bibi never even tried to meet one-on-one with Mahmoud Abbas. All that he did was meant to stall. After all, what’s behind the demand that the Palestinians recognize us as a Jewish state? It was meant as a stalling tactic. It has no meaning. I don’t need it. It even embarrasses me.

I accept that at the end of the conflict each state must recognize the sovereignty of the other, and I certainly think they need to recognize us, but I don’t need the seal of approval of the Palestinians. This issue isn’t part of the central issues in the negotiations between us and them, and it was meant to make the Palestinians look like refusers.

Al-Monitor: And the Palestinians? Did they make no mistakes? Did they come with clean hands?

Gal-On: I’m sure the Palestinians made many mistakes, and Abbas also made mistakes. I don’t think they’re perfect, but very often I have the feeling that the Israeli public forgets that the relations between us and the Palestinians aren’t equal. The government of Israel is the sovereign power, and there’s no symmetry between the occupier and the occupied.

When Defense Minister [Moshe] Bogie Ya’alon announced on April 13 that close to 1,000 dunam [247 acres] in the Gush Etzion settlement block will become state lands, what do we expect the Palestinians to do? It’s not that I’m defending them, I just wonder where all this will lead.

I was with Mahmoud Abbas on the day when Bibi met with [US President Barack] Obama [on March 3]. He told me that if the negotiations won’t advance he’ll put the keys on the table and tell Netanyahu to take responsibility for what’s happening in the Palestinian Authority. He told me that he insists on the fourth round of prisoner releases, and if that doesn’t happen, they’ll turn to the UN. I understood that he’s serious. Abbas estimates that Bibi wants to stall, and he doesn’t want to grant him that.

Al-Monitor: On the other hand, there’s the argument that Abbas also wants to stall because of internal issues.

Gal-On: I don’t think he wants to stall. He told me at the same meeting that he also has problems with internal opposition, but he certainly talked about the positive aspects of an agreement and normalization. He’s concerned about the outbursts in the refugee camps and the possibility of an outbreak of terrorism.

Al-Monitor: Where do you think this is heading?

Gal-On: Right now, it seems that the negotiations are in a state of clinical death. It could be that there would be artificial respiration for a limited period of time. With Bibi it’s negotiations to nowhere — it’s slamming on the gas pedal in neutral.