Meretz Party: victim of its own convictions

The left-wing Meretz Party suffers from a negative image among Jewish voters, but its greatest problem is speaking the truth and daring to criticize the government even at times of military conflict. 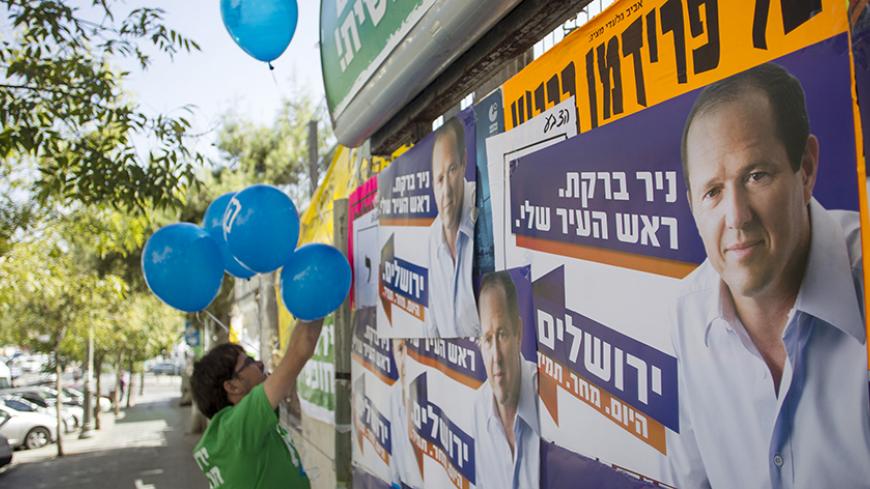 A supporter of the Meretz Party hangs balloons next to campaign posters of Jerusalem Mayor Nir Barkat in Jerusalem, Oct. 22, 2013. - REUTERS/Baz Ratner

Yair Lapid, who went into politics riding the waves of the social protest of summer 2011, does not miss an opportunity to accuse the Labor Party of “leftism.” In a 2012 interview, the Yesh Atid Party leader announced: “I am not part of the center-left bloc, we are center, [Hatnua leader] Tzipi Livni belongs to the center, and Labor is a declared left-wing, socialist party.”

After long months with Livni in the most right-wing government in Israeli history, the day after she joined forces with Labor Party Chairman Isaac Herzog in December, Lapid said, “The elections will not be between right and left, but between right and center.”

Livni, who moved from the Likud to Labor, passing through the Kadima and Hatnua parties on her way, shies away from the word “left” like one trying to ward off a disease. The woman who was prepared to give up more than 90% of the West Bank is not prepared to give up the Israeli political center. Just after the announcement of the Hatnua-Labor unity deal, the minister who served as Prime Minister Benjamin Netanyahu’s fig leaf, with the title of chief negotiator with the Palestinians, ordered Israel’s citizens: “From now on you must say — in these elections, it’s the center against the radical right.” One could assume that Herzog won't utter the words “I’m on the left,” at least until after the elections.

The new star, Moshe Kahlon, presents himself as Likud-retro. “I am moderate center-right,” declared the Kulanu Party leader in a speech Dec. 10 at Kinneret College. “[I am] a Likudnik with the views of a Likudnik, like [late Prime Minister Menachem] Begin was at the time.”

Which Begin did he mean? The one who gave back the Sinai Peninsula in return for peace with Egypt, or the one who built the settlements that are sabotaging peace with the Palestinians? Begin who respected the rules of democracy or Begin who got Israel bogged down in a long war on Lebanese soil?

The monthly Peace Index poll conducted Dec. 4 by the Israel Democracy Institute and Tel Aviv University indicates that Lapid has managed to position his party as the true center in many Israeli minds; 47% place Yesh Atid in the center. Only 31% identify Kulanu, headed by Kahlon, as a center party within the left. One-quarter of the respondents did not know where to locate Kahlon’s party on the political map. As for the Labor Party, 50% of the respondents positioned it in the left, and only 26% were convinced that it has become a center party.

The Meretz Party, headed by Zehava Gal-On, remains the only Zionist party that does not conceal its “left” tag. The party’s identity card states boldly that Meretz is “a left-wing Israeli party that promotes human and civil rights, social-democratic economic policy, vehement opposition to the continued occupation and political moderation.” Its platform talks about values of morality and justice and uses the word “occupation.”

The message that Meretz equals left has successfully penetrated public consciousness: 72% of those polled described it as the party most identified with the left out of all the parties regarded as Jewish parties. This clear identity has a cost in terms of voters and Knesset seats. In the last elections, Meretz got six seats. Last week’s polls indicate that unless a drastic change occurs at the last moment, if elections were held now Meretz would get five to six seats, a bit over the electoral threshold. In other words, only four or five of each 100 Israelis will mark “Meretz” on the ballot March 17.

To get an idea of the extent of the left’s decline, remember in the elections to the first Knesset (the Constituent Assembly) held in 1949, and in the elections to the second Knesset in 1951, the left (comprising Mapam, Maki and the Arab parties affiliated with Mapai) won 25 mandates. In the 10th Knesset in 1981, the left was down to six. The significant comeback occurred in 1992 elections to the 13th Knesset, in which the Labor Party headed by the late Prime Minister Yitzhak Rabin put an end to 15 years of Likud rule with 44 seats. Meretz won 12 seats and became a senior government partner. In the 2009 elections, it plunged down to three Knesset seats.

A public opinion poll conducted in the spring of 2012 by the left-leaning Molad Institute, with the help of the American GBA polling agency, reveals that the left suffers from a negative public image, especially among young people. They regard it as alienated and helpless on issues of defense and sorely lacking in governance ability. The Meretz leadership is viewed as an Ashkenazi elite from Tel Aviv’s well-to-do northern neighborhoods that sees no need to place a general at the top. Most Israelis don’t know or don’t want to know that Meretz Knesset member Ilan Gilon comes from a poor family in the town of Ashdod, and that the Meretz Knesset faction is a leader in social legislation. They don’t remember or don’t want to remember that former party leader Yossi Sarid was one of Israel’s best ministers of education. Meretz leaders complain that the media, which for some reason is considered left-leaning, totally ignores them. Sometimes they even “forget” to include the party when reporting poll results.

But Meretz’s biggest problem lies in its principles. The vast majority of the Israeli public, which believes that in times of war one must “join hands,” is angry at hearing criticism of the government in real time. The lack of identification by Meretz with the goals of war, as happened during Operation Protective Edge, is interpreted as a lack of identification with the Israel Defense Forces — if not a downright “stab in the heart of the nation.” Similarly, the great plunge of Meretz to three Knesset seats in 2009 (as a result of a significant voter drain from Meretz to Tzipi Livni at the very last moment before election day), occurred after loudly opposing the 2008 Operation Cast Lead.

On the other hand, if Meretz goes with this flow and concedes its unique title as a “left-wing party,” it might find itself losing the hard core of its voters. Some of them might find refuge in the Hadash Party. Others might prefer spending the day at the country club, and simply won't bother showing up at the ballot box. Don’t envy Gal-On.