Meretz Chairwoman Zehava Gal-On is campaigning to preserve her party's constituency, which is turning toward the Zionist Camp list in hopes of an electoral upset. 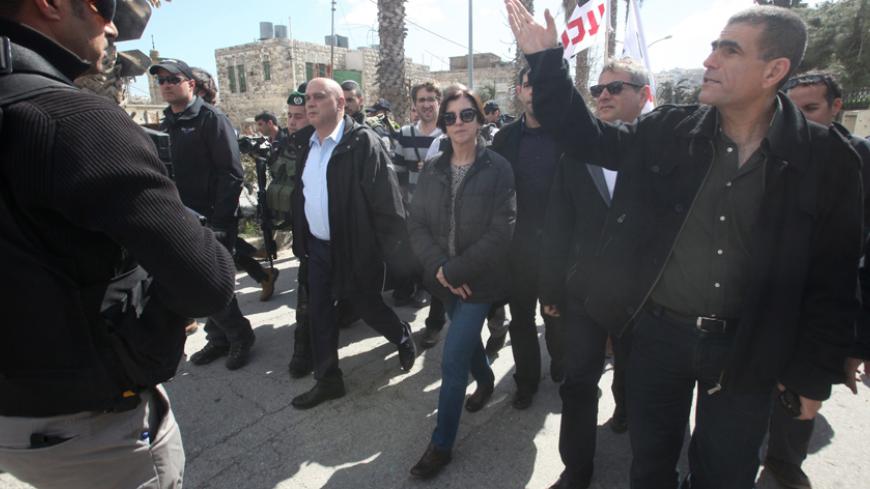 In close talks with leftist activists this week, Meretz chairwoman and Knesset member Zehava Gal-On asked, “Why should we believe them? There’s no reason for the Meretz Party to sit on the fence for the sake of the Zionist Camp, just so they can join a coalition with [Prime Minister] Benjamin Netanyahu and Naftali Bennett after the elections. I’ve seen this … with Tzipi Livni before, back in 2009, when she emptied us out of voters. She didn’t become prime minister in the end, and she almost eliminated us, too.” Gal-On was responding to the question of whether Meretz’ new campaign harms the chances of Labor Party chairman and Zionist Camp co-leader Isaac Herzog to put together the next government.

Gal-On swallowed, looked straight ahead and explained that she has no intention of apologizing or justifying herself. She has a party to lead into the elections, and she will not be Zionist Camp co-leader Livni’s cannon fodder again. “This time I’m not going to pay the price, and I have no reason to, either,” said an emotional Gal-On. “I’m saying that we will support Herzog as prime minister, but who can guarantee that he and Livni will not join a coalition with Netanyahu? They’ve already done that before. In the last elections, Livni explained to everyone how dangerous Netanyahu is, and yet she was still the first person to sign a coalition agreement with him and join his government.”

On Feb. 1, Meretz revealed its updated election campaign, which focused on attacking Herzog and Livni. The joint heads of the Zionist Camp both refused to make a public commitment not to be part of a Netanyahu government. Meretz strategists made the decision to concentrate this full-fledged attack on the leaders of the Zionist Camp after expressing quite a few reservations about it. Gal-On, who watched sadly as many of her anticipated seats shifted to the Zionist Camp once Livni joined forces with Labor, felt a heavy sense of deja vu. In the latest Walla! poll, released Feb. 5, Meretz received just four seats, placing the party right on the electoral threshold. With any fewer votes, they would be out of the Knesset entirely.

It is hard to ignore the similarity between this round and the 2009 elections, when Meretz dropped to just three seats. Then, as now, Meretz’ votes went to the largest party in the leftist bloc, Kadima, then headed by Livni. The reason is similar, too. The traditional leftist electorate was and is once again convinced that there is a chance for a political upset. It is therefore strengthening the largest party, even though the possibility of such a turnabout actually happening is slim. Livni walked away from the 2009 elections with 28 seats, one more than the Likud, but she was still unable to cobble together a coalition because the left-leaning bloc was still weaker than the right. Meretz came out of that campaign battered and bruised, and Gal-On, who then filled the No. 4 slot on the list, was kept out of the Knesset. It was a traumatic election campaign. The party’s chairman at the time, Haim Oron, avoided fighting for the seats that went to Livni and almost led Meretz to its complete demise.

Gal-On now heads a rehabilitated party that won six seats in the last election. In polls conducted before Operation Protective Edge, it even reached the 10-seat mark, but last December, Herzog and Livni joined forces, and the rest is history. The trauma of 2009, which left Gal-On out of the Knesset, is still etched firmly in her memory, and she has no intention of being the one to pay the price again.

Internal polls conducted by Meretz looked into why the party is losing seats. The unequivocal finding was that the party’s voters are switching their allegiance to the Zionist Camp because they are convinced that Herzog and Livni are on their way to a turnabout. The enormous frustration in the party stems from the fact that in many ways, the forecast is little more than an optical illusion. The Zionist Camp has failed to recruit voters from the moderate right, which would change the balance of power between the two rival blocs. It has only grown at the expense of Meretz. In 2013, Labor, Meretz, HaTenua and Kadima had a total of just 29 seats. According to the most recent polls, the Zionist Camp and Meretz will win about the same number of seats, while Kadima has disappeared entirely from the political map.

“I made the difficult decision that I would not go back to the way things were in 2009," said Gal-On at the strategy session. "Some people will think that I am shooting into the tank [meaning targeting one's own team], but I don’t care. It’s not true. I am fighting against the current, to protect us. I have a responsibility to my supporters in the Meretz camp, and there is no reason for them to discover that Netanyahu has a government because of their votes or that they actually supported a Netanyahu-Bennett government. I met people after the 2009 elections who contended with serious pangs of conscience over how they could do such a thing. There is absolutely no reason for that same mistake to repeat itself.” At the meeting, it was decided to wage an aggressive campaign to win back the people who abandoned the party.

Meretz’ new campaign message is focused and succinct. It appears on all the party’s posters and video clips, alongside photos of Livni, Herzog and Netanyahu standing together: “Today, Herzog and Livni are saying, ‘Either us or him.’ Could they say, ‘Us and him’ tomorrow? … People on the left: It is important to know that a vote for Meretz is a sure vote that Herzog is recommended to form the next government, a vote that will never join up with a right-wing coalition, and a vote that will always defend your values. So decide what you would rather see in your next government: Meretz and Herzog? Or Netanyahu and Herzog?”

Staff at Meretz' campaign headquarters say that they have seen the party recovering over the past few days, though it is quite possible that this hasn’t been reflected in the polls yet. Recent developments show that the Zionist Camp will not take off even in the best circumstances, and that in the worst, it will actually lose strength. Meanwhile, the Likud is reinforcing its status in the polls as the largest party. It is therefore quite possible that these figures, along with the campaign, will help bring Meretz former supporters back to the party.