While former Prime Minister Ehud Olmert was forced to resign because of police investigations into his affairs, Prime Minister Benjamin Netanyahu faces no political risk in the near future. 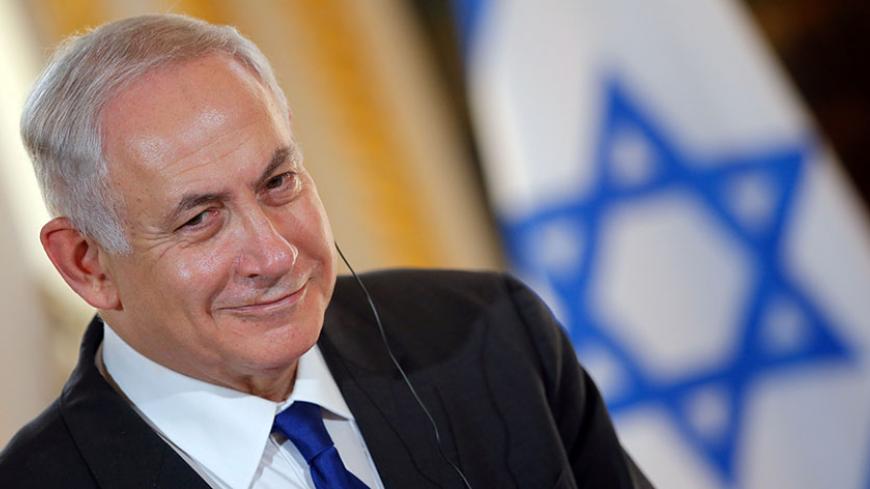 Prime Minister Benjamin Netanyahu and Finance Minister Moshe Kahlon agreed on Aug. 8 to allocate 100 million shekels ($28 million) for Israel's 70th-anniversary celebrations in April 2018. It was the second time the two men had cooperated in as many days. On Monday, the Supreme Court struck down the Third Apartment Tax Law, one of Kahlon's major initiatives to lower housing costs. Nevertheless, he was able to reach an agreement with Netanyahu's right-hand man in the Knesset, coalition Chairman David Bitan, that the law would be legislated again as early as the Knesset's summer recess in September. What this means for him is that he will not have to wait to pass this law until the winter session begins in October.

Until only recently, Bitan never missed an opportunity to attack and ridicule the finance minister. He even set obstacles for Kahlon's "Net Family" plan of benefits for families with children. Then there was the third side of the triangle that made up the political maneuvering to pass the proposed tax on apartments: the chairman of the Knesset Finance Committee, Moshe Gafni, of ultra-Orthodox Yahadut HaTorah. Although he expressed reservations about the law and the way it had been legislated, he agreed to Kahlon's request to expedite the process.

It is strange to see the coalition interacting so harmoniously given the current wave of investigations that threatens to topple Netanyahu's fourth government. This is especially true of the relationship between Netanyahu and Moshe Kahlon of the Kulanu Party. Only last March, differences between them over the creation of the new Public Broadcasting Corporation (to replace bankrupt Israeli Broadcasting Authority) really did threaten to bring down the coalition.

The coalition's dire state became even more palpable for Netanyahu last weekend when his former Chief of Staff Ari Harow signed an agreement with the State Attorney's Office to become a state witness against his former boss. According to reports in the media, Harow will be providing the investigation with the smoking gun that will lead to indictments against Netanyahu in Case 1000 (accepting gifts from business figures) and Case 2000 (the recorded conversations with Yedioth Ahronoth publisher Arnon Mozes for a positive media coverage deal of Netanyahu).

Oddly enough, this drama did not send the anticipated shockwaves through Netanyahu's government. In fact, it only strengthened the coalition and improved the alliances between its various components.

Kahlon is considered the weak link in the chain of parties that make up the coalition, but even he has no desire to see it fall apart. Now that his Third Apartment Tax Law was overturned, he will need more time to chalk up achievements before the next election. And he is not the only one who needs more time. The same is true of the heads of all the coalition parties. The chairman of Yisrael Beitenu, Defense Minister Avigdor Liberman, already said that if the prime minister is indicted, he will recommend that he doesn't resign. Liberman loves his position as defense minister and his senior status in the government. He also believes that over time, these two factors will combine to increase his popularity among the electorate. Like Kahlon, he would only lose if the elections are moved up.

While Liberman and Kahlon have been relatively restrained in their remarks, Minister of Education Naftali Bennett released on Aug. 6 a very warm statement in support of the prime minister, even though he is usually seen as competing with Netanyahu for votes from the right. "Israel needs stability," he said. "I am committed to the continuation of this government. The prime minister should be presumed innocent. I hope that the investigation ends without an indictment. … A right-wing nationalist government is vital to Israel's security, and we will continue to lead in this way until the next election, which we hope will be held as scheduled. The public that regards us as Israel's nationalist leadership expects us to act responsibly for the benefit of the state."

At this stage, even Bennett sees no advantage in advancing the election. In his case, the situation is even more complicated. He cannot be seen by his electorate as having brought down Israel's most right-wing government ever. At the same time, he cannot ignore the polls, which seem to say that currently he has no real chance of being prime minister, even if Netanyahu's political career comes to an abrupt end. The No. 2 member of HaBayit HaYehudi, Minister of Justice Ayelet Shaked, also announced that Netanyahu should not have to resign, even if he is indicted. At the same time, the prime minister also received support from HaBayit HaYehudi's far right flank. "Don't resign, even if you are indicted," wrote Minister Uri Ariel and Knesset member Betzalel Smotrich.

At this point, Netanyahu can also take a modicum of pleasure from what is happening within the Likud Party itself. It took them a few days, but almost all of its ministers and Knesset members expressed their support for him in interviews and on social media. Minister of Transportation Yisrael Katz, who regards himself as Netanyahu's successor, released a Facebook post in support of the prime minister. Former Minister Gideon Saar, who announced that he would also run for leadership of the Likud, also backed Netanyahu. In other words, the Likud's leadership isn't taking advantage of Netanyahu's troubles. Ministers Gilad Erdan, Ofir Akunis and Miri Regev also released statements supporting the prime minister, and almost all of them are expected to participate in a demonstration of support for Netanyahu that the Likud is organizing in Tel Aviv Aug. 9.

Likud’s support for Netanyahu can be attributed to a combination of three factors. First, Bitan has threatened that anyone who fails to defend the prime minister will be punished for it in the primaries. Second, even his potential rivals recognize that the head of their party still has a safe lead in the polls and massive support among the Likud base (where the investigations are regarded as nothing more than persecution by the left in order to bring Netanyahu down). Finally, there is the timetable. It could still take a year or more before there is any indictment, so there is no reason to risk dismantling the coalition now.

That is why Netanyahu's situation is unlike that of Ehud Olmert, the last prime minister to face a criminal investigation. Under pressure from the Labor Party and people within his own Kadima party, Olmert was eventually forced to resign. In contrast, Netanyahu is in no political danger, at least for the near future.