Netanyahu's coalition goes to war — with itself

Recent proposed legislation has fractured the governing coalition, forcing Prime Minister Benjamin Netanyahu to roll up his sleeves to keep it from falling apart. 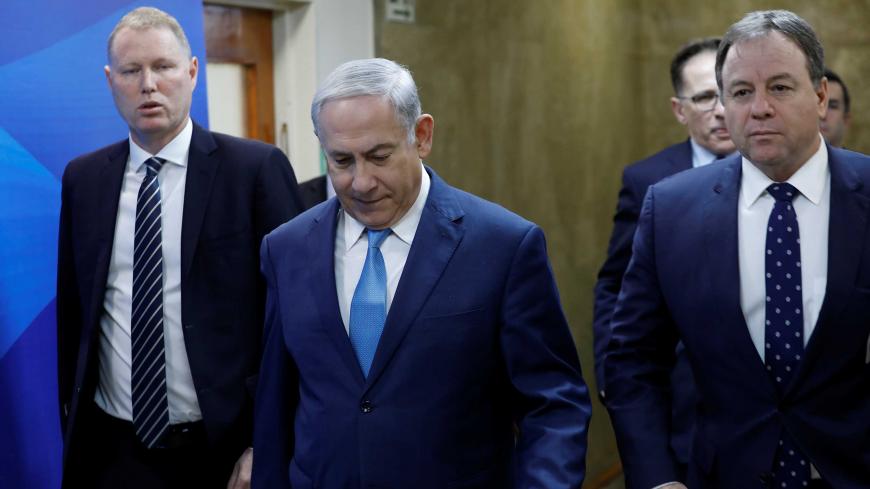 Prime Minister Benjamin Netanyahu never imagined that he would start 2018 the way he has. His strong, stable coalition had long offered him a sense of quiet security, but now it is falling apart, and he is losing control of its disparate pieces. His political adroitness had previously prevented the kind of crisis that arose Jan. 3 from causing everything to spin out of control. Things went haywire leading up to the vote on the death penalty for terrorists law promoted by the chairman of Yisrael Beitenu, Defense Minister Avigdor Liberman.

The scent of new elections is in the air, and Liberman can smell it, as can all the other leaders of the coalition parties. Liberman is now in a race against the clock to play to his base by getting as many achievements under his belt as possible. He therefore has two major pieces of legislation in his sights.

The first is the death penalty law, which would appeal to his right-wing nationalist base. The second is his fierce opposition to the supermarket law, promoted by ultra-Orthodox Shas Chairman Aryeh Deri. The law, which would allow Deri to use his position as interior minister to shut down stores on the Sabbath, is causing an uproar among Yisrael Beitenu's largely secular base. Doing their shopping on the Sabbath is part of their weekly routine.

These two controversial laws have turned the coalition into a battlefield, sending shockwaves to its core. They have even forced Netanyahu to roll up his sleeves and spend long hours in the Knesset, as much as he detests the place.

Liberman's announcement that his faction would oppose the supermarket legislation, which was scheduled for its second and third (final) reading, set off a race to find a majority with which to pass it. The opposition, which in the past two weeks has begun to shake off its languor, announced that it would bring all of its members in for the vote and forbid individual members to forgo voting as a courtesy to coalition members unable to cast ballots. The opposition's stubborn insistence that it would avoid trade-offs in the vote — even with Knesset member Yehudah Glick, who was informed that morning that his hospitalized wife, Yaffa, had passed away — resulted in one of the most cynical moments in the history of the Knesset.

Deri, determined to bring the law up for a vote no matter what, sought to see whether the rabbi in the settlement where Glick lives would allow him to go to the Knesset to vote right after his wife's funeral. Deri's attempt not only failed, but also caused him considerable embarrassment after news of it leaked. In the end, Deri had no choice but to back off, so the vote was postponed.

That, however, was not the end of the coalition's difficulties. Liberman's opposition had a boomerang effect, with the ultra-Orthodox parties deciding to take revenge against him by opposing his death penalty legislation. Even before that, during a Cabinet meeting, a vociferous argument had erupted between Liberman and Energy Minister Yuval Steinitz, who opposes the law. Steinitz contended that the government should approve the law before its going to the Knesset. Liberman was furious. He informed Steinitz that the legislation was part of his party's coalition agreement with the Likud and then stormed out of the meeting, the prime minister scurrying after him. While Liberman and the other coalition leaders have no interest in advancing elections, anything is now possible.

As if the ultra-Orthodox parties’ retaliation against Liberman wasn't enough, when the law finally came up for a vote, two ministers from HaBayit HaYehudi, Naftali Bennett and Uri Ariel, were conspicuously absent. They certainly had no qualms about seeing their rival in the right-wing camp break a sweat.

At the same time, Netanyahu's efforts to find a compromise solution to the supermarket law caused an uproar in the Likud, many of whose voters are also secular. Netanyahu is not at all enthusiastic about the legislation, and that's putting it mildly. It could hurt him electorally. Nevertheless, he has no choice but to fight for it if he wants to keep the ultra-Orthodox parties in his coalition. It is now believed that the second and third readings of the bill will be brought up for a vote next week, after it is toned down to allow convenience stores operating in gas stations, and the entire southern town of Eilat, to remain open on the Sabbath.

Netanyahu may have ended the week with his coalition intact, but the emerging prognosis is that the clock is already ticking toward the next round of elections. There hasn't been such a precarious and intense week in the Knesset since the coalition was formed in 2015. Until recently, the coalition had been supremely confident in its stability and strength. Now that arrogance is dissipating. The powerful coalition chairman, David Bitan, ruled it with a high hand until he was forced to resign over criminal investigations into his affairs. Meanwhile, the investigations into Netanyahu's affairs are nearing their end. As of now, it is difficult to anticipate what the political impact will be if the police recommend that Netanyahu be indicted for bribery, yet that seems likely.

Like a nerve-racking poker game, everyone realizes that someone is about to call all the bluffs, and everything will fall apart. The only thing they don't know is how much time they have left. This signals the beginning of the wild, populist stage, in which all the parties try to get as many achievements as possible under their belts. So, for instance, Finance Minister Moshe Kahlon has been engaged in electioneering economics for months, with daily headlines announcing tax cuts and lotteries for young couples to win cheap apartments.

Netanyahu can hear the grumbling around him. He can see the emerging chaos, and he is doing what he can to keep his coalition stable. He must keep it that way at least until the police release their recommendations, or he will collapse. It had been fairly easy for him to navigate the coalition quagmire, at least until last week, even if everything around him was seething and percolating. His political strength in the Likud and in his friendly ultra-Orthodox and right-wing coalition provided him the political backing he needed on a dismal, rainy day. With the moment of truth fast approaching, however, Netanyahu is finding himself with a coalition that is much less stable than what he is used to. He will now have to work quite hard to keep it from falling apart.