Israeli parties play to voters in fight over Sabbath

Disagreements within the ruling coalition over a bill mandating the closure of supermarkets on the Sabbath are just the first gentle digs in the coming electoral war. 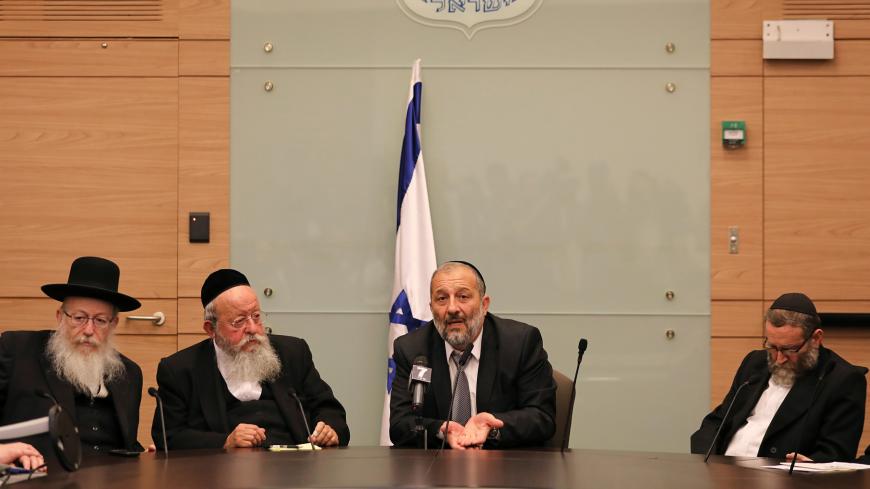 Two senior Israeli politicians — Defense Minister Avigdor Liberman and Interior Minister Aryeh Deri — have been conducting a polite Twitter duel over proposed legislation to close down supermarkets on the Sabbath. Some towns are rushing to adopt bylaws contravening the bill before the Knesset adopts it.

Liberman, chair of the right-wing but largely secular Yisrael Beitenu party, wrote, “Givatayim, Rishon Lezion, Herzliya, Holon, Ramat Gan and other towns are absolutely right. Activity in the public domain on Shabbat is solely a matter for local government. Yisrael Beitenu stands firmly behind the chairman of the Union of Local Authorities in Israel, Haim Bibas. Yes to tradition. Yes to Jewish values. No to religious coercion.”

Deri, chair of ultra-Orthodox Shas and the bill’s sponsor, responded, “Liberman, my friend. If those same mayors were to declare that there’s no need for loyalty to the state and to boast about it, or were to adopt bylaws citing the unique local character of their town to ban immigrants from living there, would you also applaud and praise them?”

Liberman: “Aryeh, my friend. Who knows better than you my attitude toward Judaism? I repeat, yes to the traditions of Israel and to Jewish values, but no to religious coercion. I’m surprised that you can’t tell the difference between a call to respect the freedom of Israeli citizens to respect their heritage in keeping with their conscience and a call to discriminate against immigrants.”

The agenda of Yisrael Beitenu is clearly anti-clerical and against religious coercion — at least nominally. However, since Liberman joined the government in May 2016, he has avoided this morass — perhaps because the coalition agreements with the two ultra-Orthodox parties were already a done deal, and because he did not want clashes to disrupt his term as defense minister. But now, almost three years after the last elections, with new elections on the horizon, Liberman and the religious parties feel they need to showcase their accomplishments and stand on principle. With several religion-related laws in the pipeline, such as the so-called Jewish tradition law (under which Jewish tradition is taken into consideration concerning work permits on the Sabbath), a coalition crisis is only a matter of time.

The proposed supermarket closure bill authorizes the interior minister to override municipal bylaws allowing commerce in retail businesses like supermarkets, malls and clothing stores on Saturday, the Jewish day of rest. The law does not apply to the city of Tel Aviv since its bylaw allowing grocery stores to operate on the Sabbath was upheld in a landmark Supreme Court ruling in October 2016, and the new law will not be applied retroactively.

Other towns unhappy with the proposed bill have sought to pass bylaws enshrining the status quo before the ban passes in the Knesset. On Dec. 25, for example, the town council of Rishon Lezion, just south of Tel Aviv, approved an amendment to its bylaws that would allow some stores to open on the Sabbath. Acting Mayor Moti Ajami told Al-Monitor that the move took into consideration the various sensibilities of its residents to enable them to live according to their religion, belief, needs and wishes, in the spirit of tolerance typical of the town. “We are adapting our laws to the situation that has been in place for decades. Anchoring it this way benefits all residents,” he summed up.

Additional towns in suburban Tel Aviv are engaged in similar efforts, among them Ramat Gan, Holon and Givatayim (where the local faction of the largely religious Habayit HaYehudi has obtained an injunction banning debate on the bylaw). If these towns fail to amend their municipal statutes before the law comes into effect, they will have to obtain approval from the interior minister for stores to operate on Saturdays.

The proposed supermarket bill excludes restaurants, cafes and other venues defined as serving “public entertainment,” such as theaters, in order to preserve the status quo. Thus for the first time in Israeli history, ultra-Orthodox parties will sign onto legislation that indirectly approves commerce on the Sabbath.

The "no" vote by the Yisrael Beitenu Knesset members signals the transition from threats to action. Prime Minister Benjamin Netanyahu, who cut short a visit to Europe and was driven directly from the airport to the Knesset to take part in the vote, did not react publicly to his coalition partner’s revolt, as the law was guaranteed passage by the support of the five other coalition members.

The Knesset’s agenda includes several additional matters of religion and the state, such as the Western Wall outline (offering progressive Judaism a mixed-gender praying space) and a new draft law (enabling ultra-Orthodox men to avoid military service). In September, the Supreme Court struck down an amendment to the military service law passed with the support of the ultra-Orthodox parties. As a result, the ultra-Orthodox demanded the government formulate a new draft law and also a law enabling the Knesset to circumvent the top court’s rulings. Liberman, as minister of defense, was quick to announce that he favors the drafting of the ultra-Orthodox and supports the Supreme Court ruling.

Behind-the-scene attempts to formulate compromises on proposed religion-related laws are unlikely to be acceptable to all components of the coalition. A resulting crisis appears inevitable, and there’s nothing like the smell of elections in the air to prompt radical political stances. The politicians will now play to the public to show voters who is fighting for them. In the blatant civility displayed so far in the public Twitter clash between Liberman and Deri, the gloves are still on. When they come off, we will know for certain that elections are near.